Manila has certainly become ramen crazy.   I remember when good old Shinjuku along Makati Avenue used to be the place to hie off to satisfy ramen cravings in the dead of the night.  Now, you can find ramen everywhere. 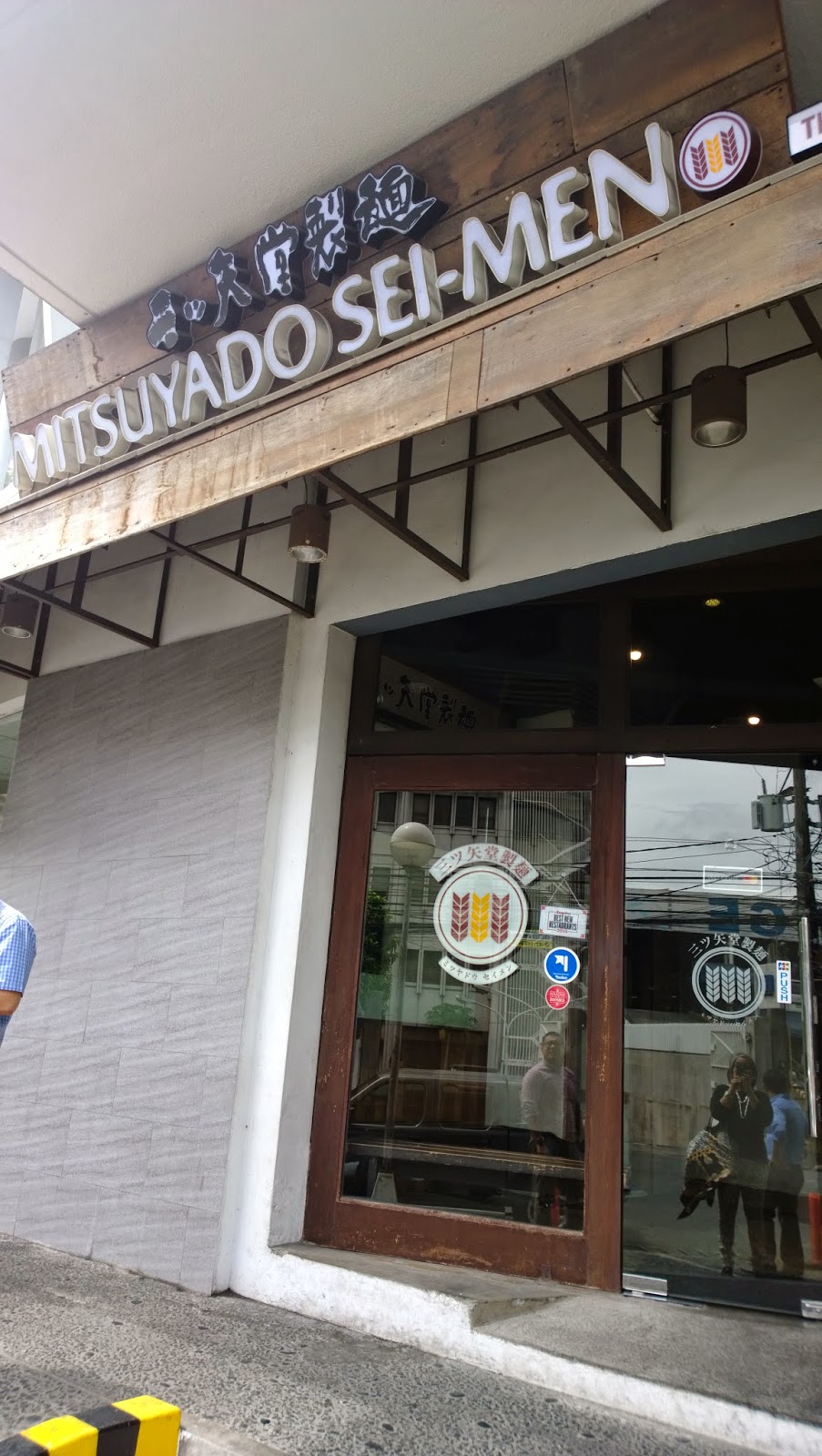 Mitsuyado Sei-Men along Jupiter Street is part of the UCC group in the Philippines but is not part of a ramen chain in Japan.  While they offer different varieties of ramen, it is their tsukemen that I think is quite outstanding. 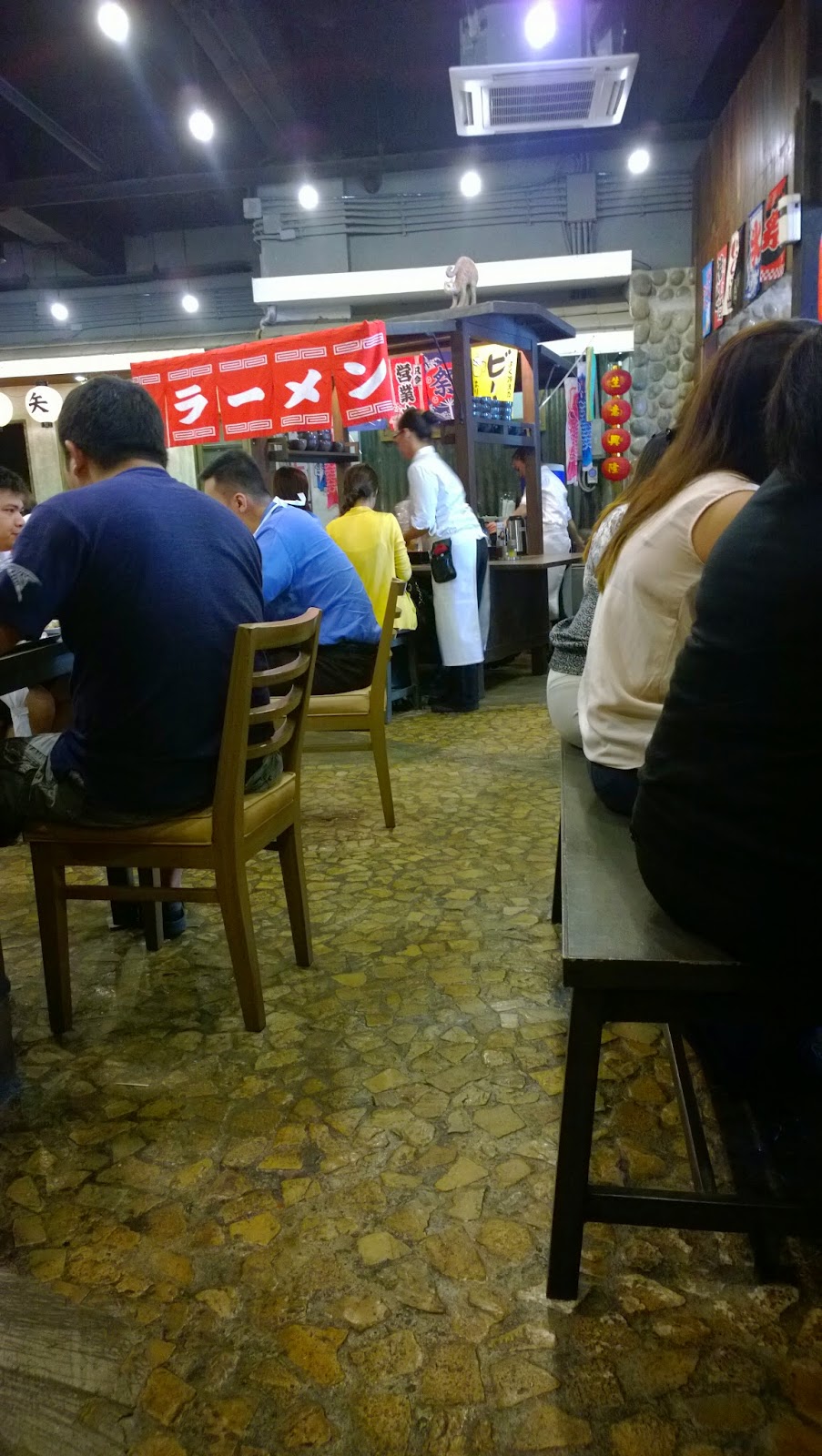 I've read quite a number of reviews that have commented on the Japanese old style feel of Mitsuyado.
There are quite  a number of kitschy items that do give you that kind of vibe. 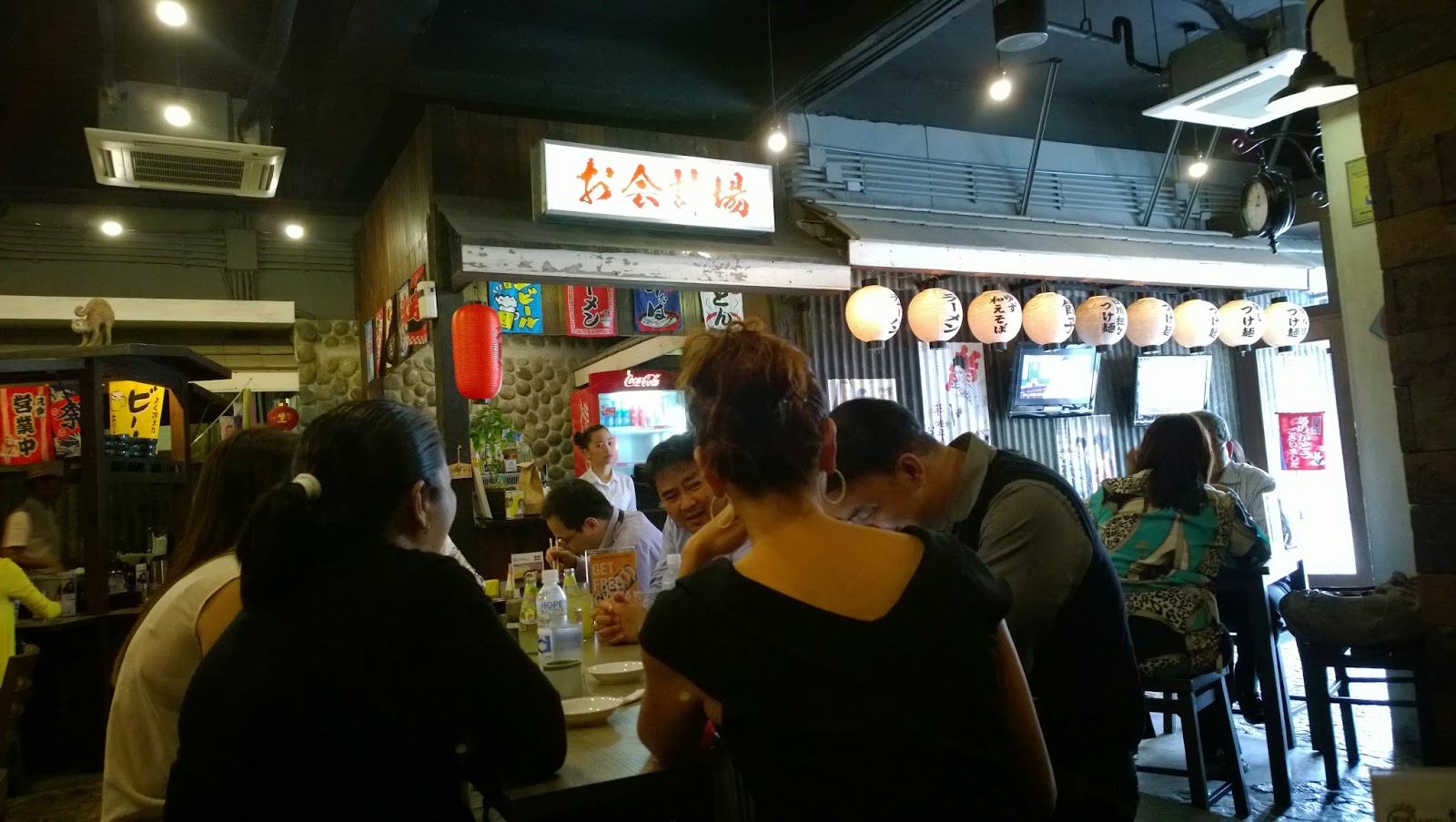 What isn't so Japanese, to my mind is the space the restaurant occupies.
Mitsuyado is quite big -- the ramen places in Japan are much smaller in comparison with just counter space plus a few tables.  Which is why the better and more popular ones always have long queues during mealtimes. 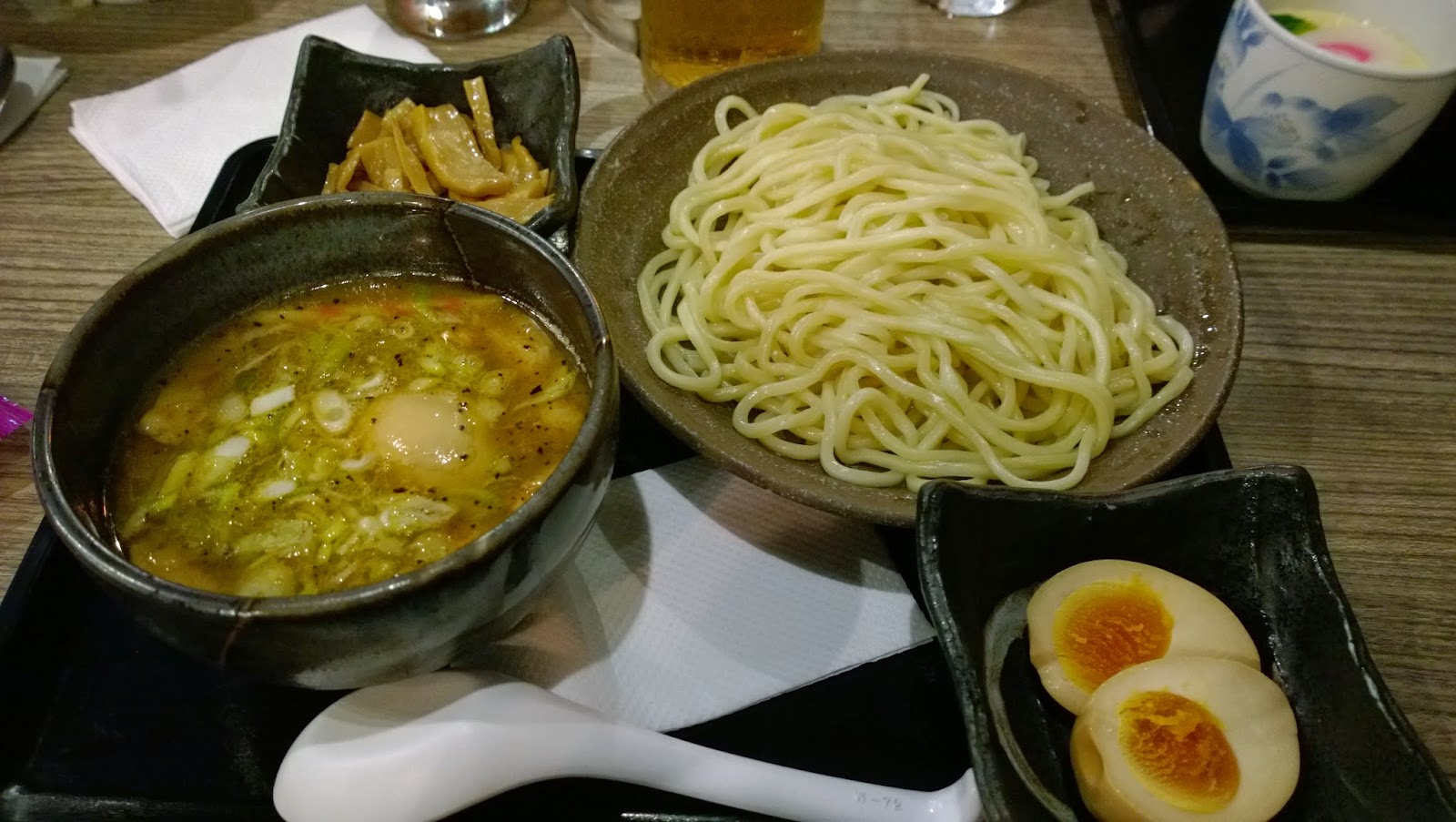 While I have yet to try their ramen, I will wholeheartedly recommend the tsukemen.
This is what I had the first time  -- ajitama tsukemen with a side order of bamboo shoots and more ajitama.  I could detect a touch of yuzu in the broth which made it light and quite refreshing.
You have a choice of hot or cold noodles  although the waitress will recommend that you get the cold variety. 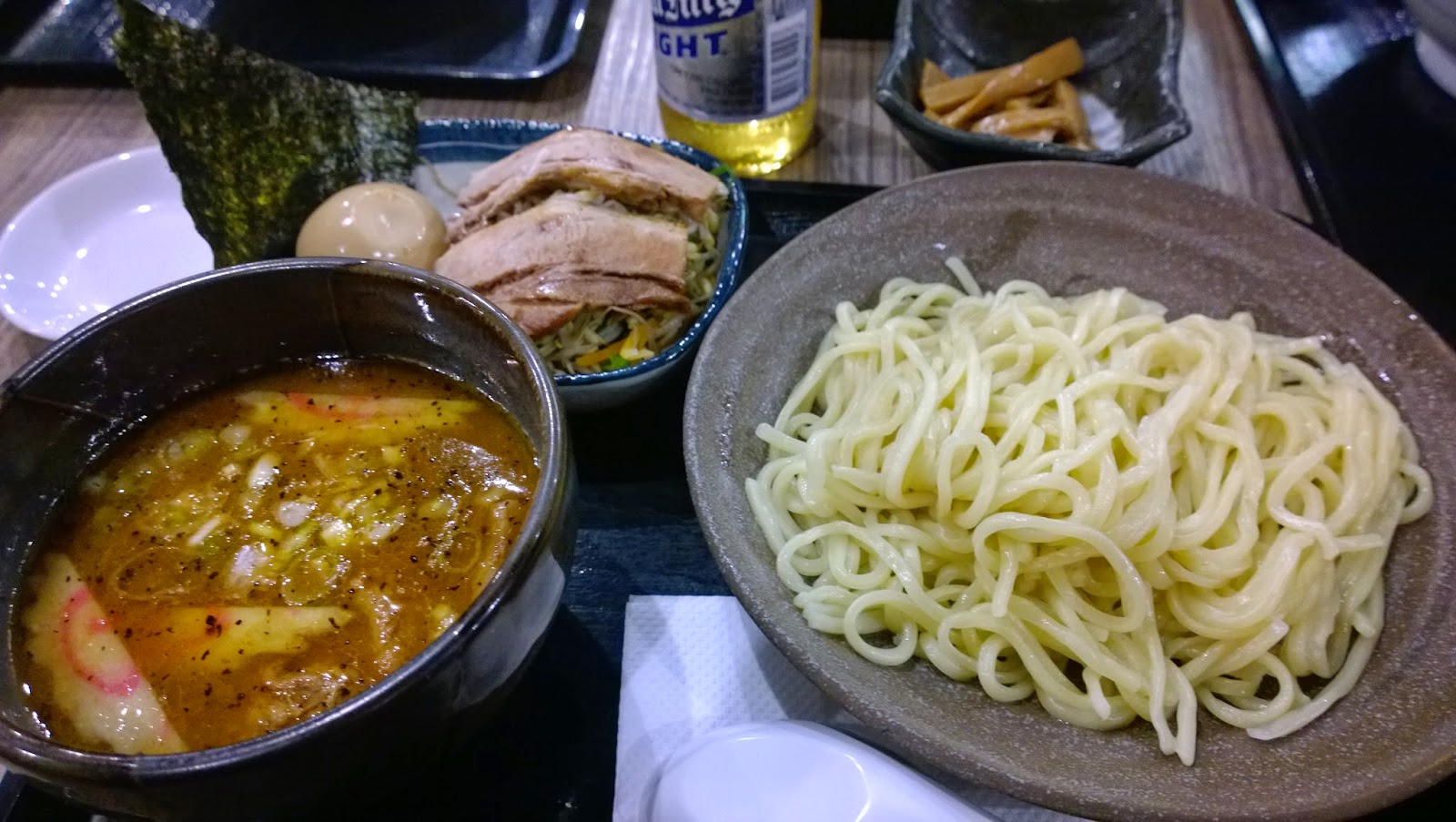 The next time we visited Mitsuyado, I opted for the giant chashu tsukemen.  The broth was a bit richer, more garlicky and peppery.  It came with two generously sized chashu slices and a whole egg.  This was more filling than the ajitama tsukemen and I would suggest this for hungrier diners. 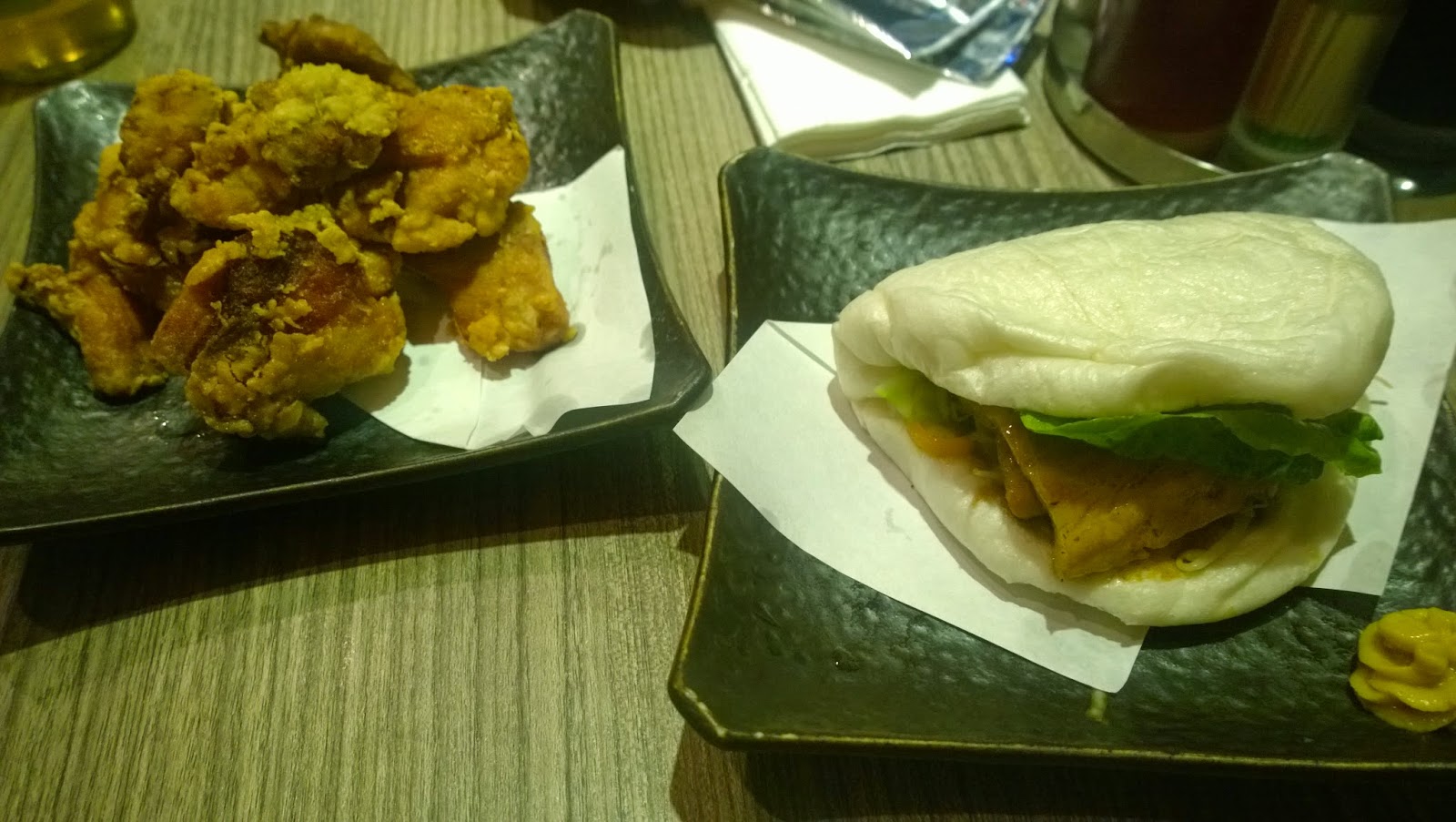 Ou third time at Mitsuyado, we tried some of the side dishes.  The gyoza was forgettable which is too bad since it's the traditional "pares" (partner) of ramen.
But surprise surprise -- the karaage was great, deep fried but not at all oily -- it was crisp, juicy and flavourful.  Very authentic tasting too.  It was cut up in bite sized, easy to eat pieces.
We also ordered the chashu bun.  Think of a soft cua pao bun filled with generous slices of soft, melt in your mouth chashu, dripping with porky juices.  The first bite yielded an explosion of taste and sauce -- which unfortunately landed on my shirt sleeve.
There's a smidgin of mustard on the side which adds some sharpness to the almost cloyingly rich taste.
While it was indeed succulent, it was not inexpensive and not as generous a serving as with the rest of the menu items. 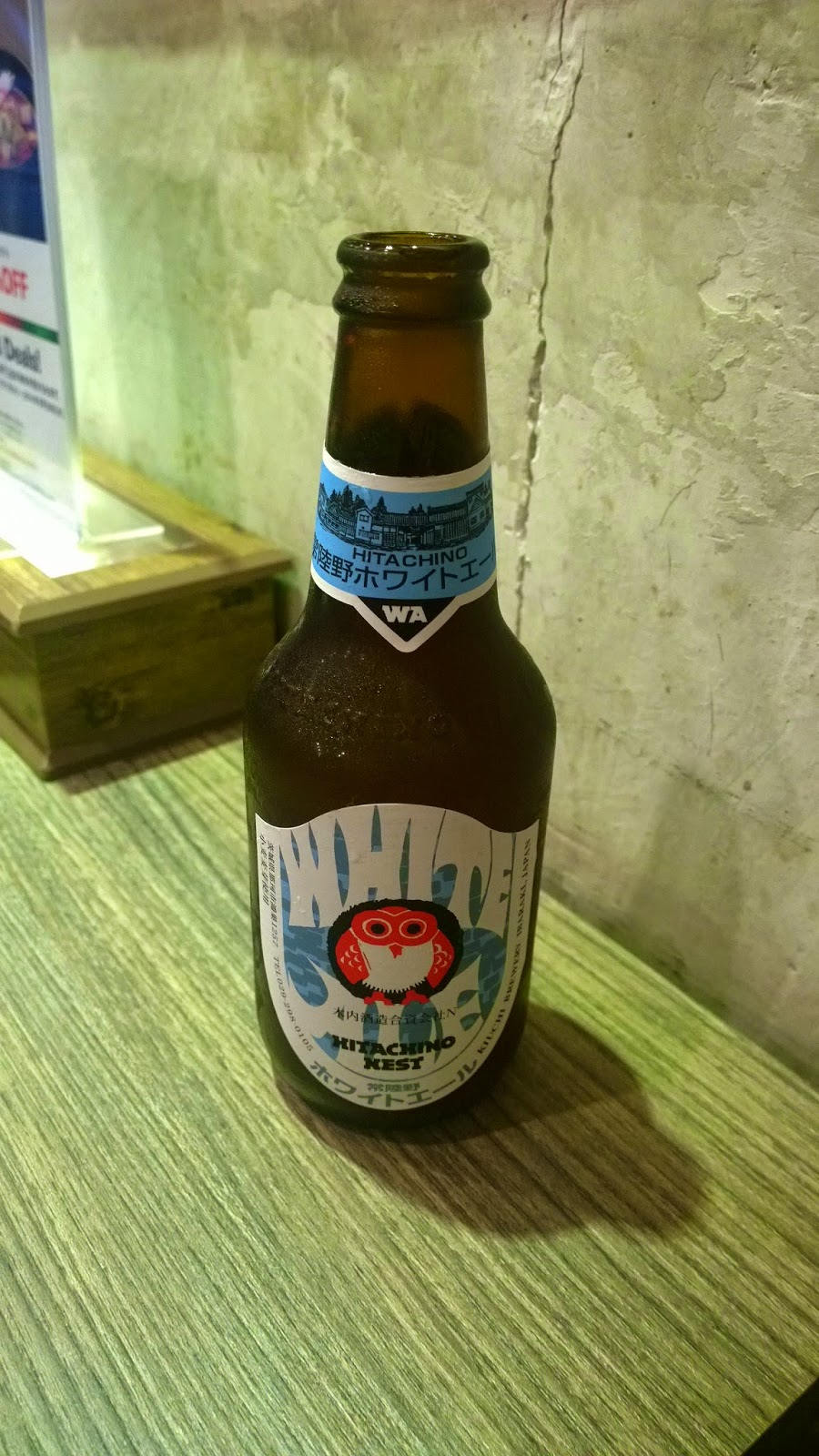 Mitsuyado serves ice cold beer -- aside from our local San Miguel and Japan's number one Asahi beer, there is also Hitachino Nest White Ale, a belgian-style pale beer brewed in Japan.
It has a spicy, fruity complex taste and pairs well with anything on the menu.
Posted by Labrador Lady at 2:08 AM 1 comment:

It's always exciting for me to discover gems of good eating when I travel around the Philippines.  Instead of playing it safe in fast food chains, I would rather take my chances on the unheard of and the untried.
Just last week, we spent a long week-end in Bohol and right at the start -- unearthed this local and popular eatery called Singuba ni Abdul Chicken Ati Atihan. 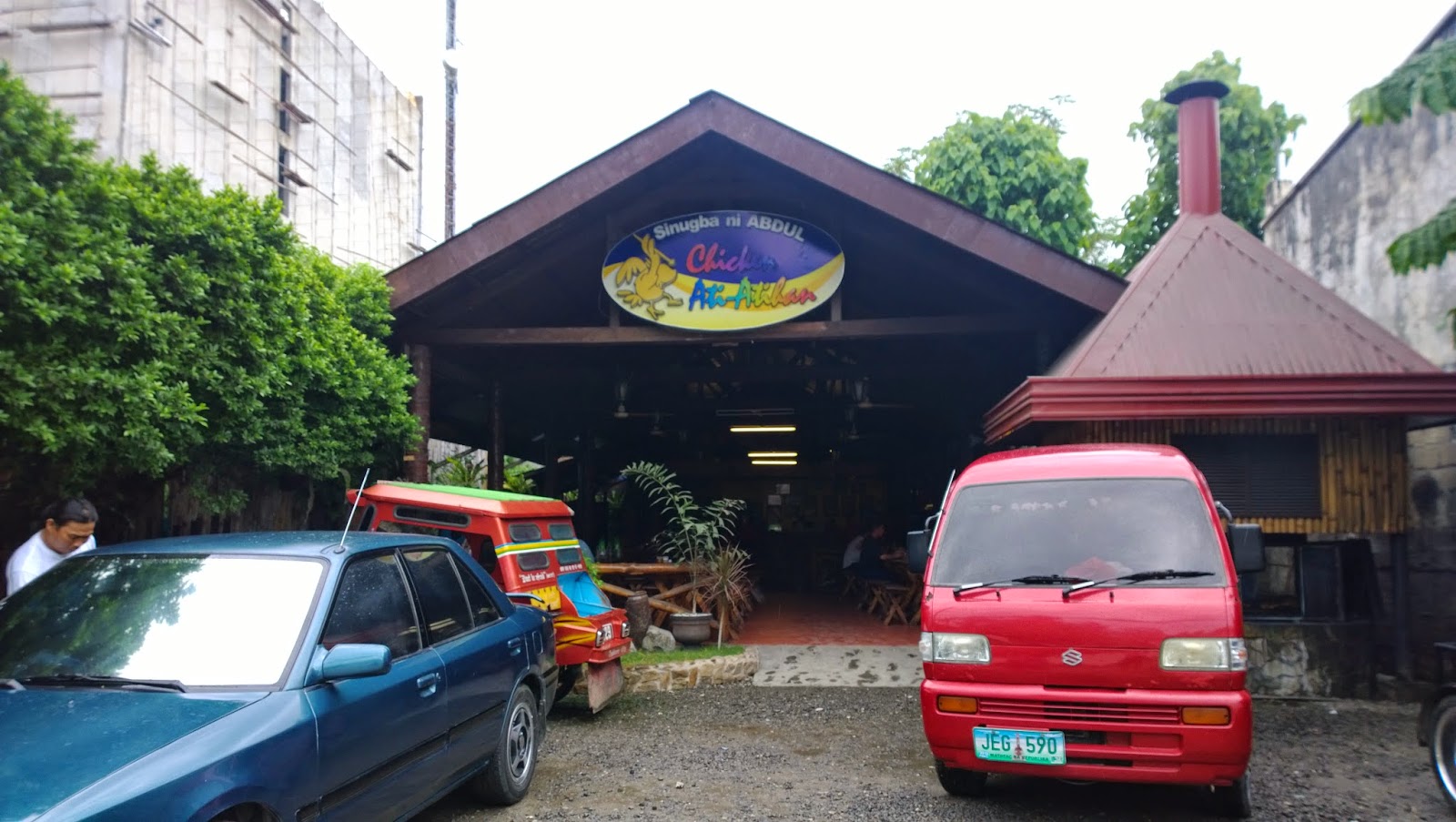 We were starving when we arrived just before 11 a.m. and right off the bat, even before we took off for our planned tour of the  Chocolate Hills, we asked our van driver, Mang Dodie to take us to the best local place he could recommend. He drove us to Sinugba ni Abdul , located along Maria Clara street, just a few minutes away from the Tagbilaran Airport. 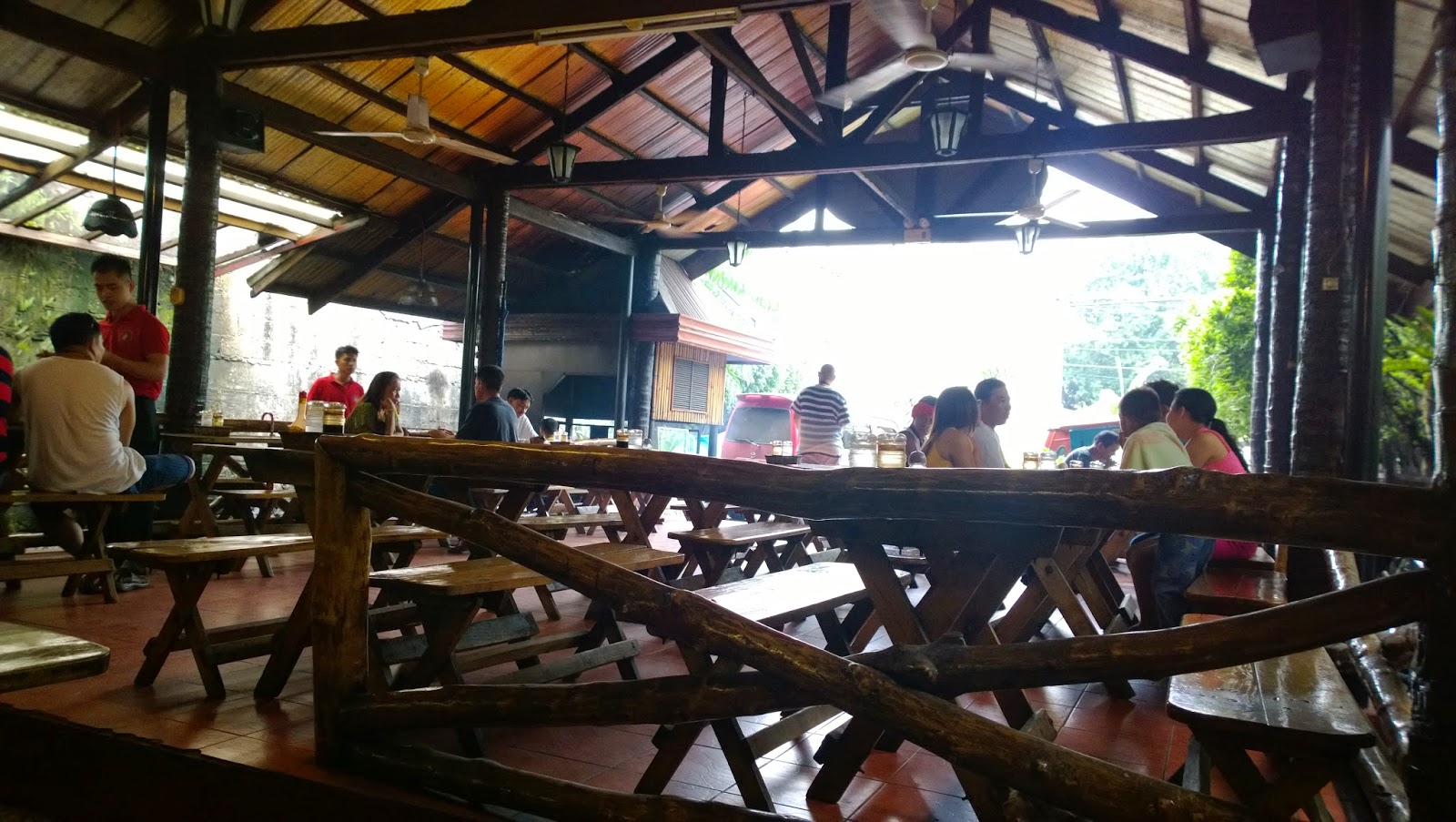 We got to the restaurant well before noon so there were plenty of tables to choose from.  The decor is definitely family friendly with wooden tables and benches that are easy to pull together, perfect for large groups.  There is no air-conditioning but the open set up allows free flowing breezes through. Lots of ceiling fans help keep the air cool and also, keep you from smelling like chicken inasal!
The place is also very clean and well maintained. 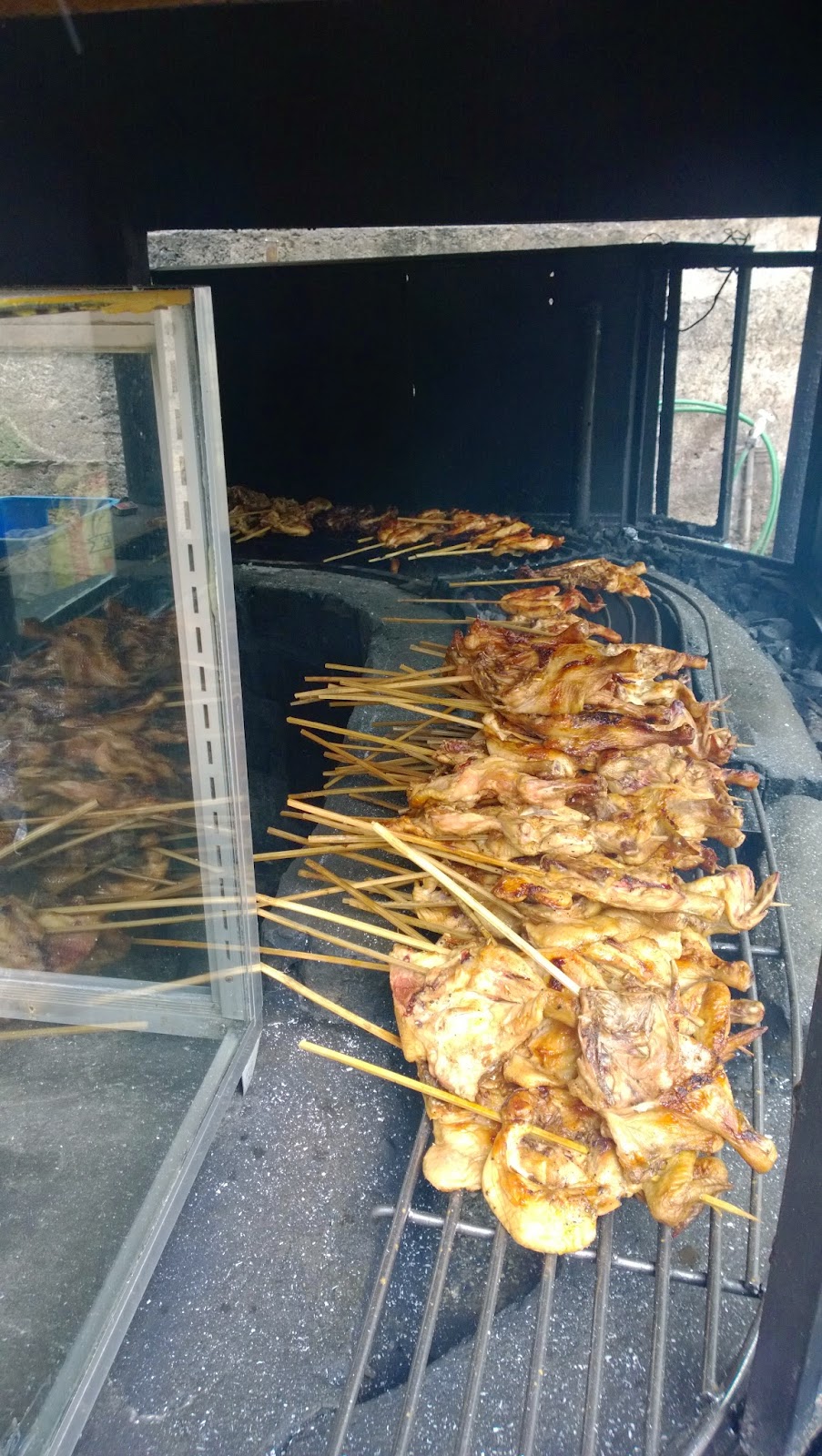 At the entrance is this charcoal open grill where skewers of marinated chicken inasal are being readied for the influx of the lunchtime crowd. This is the reason why it's called "chicken ati-atihan".  The slogan proudly declares "mapapasayaw ka sa sarap" or "so delicious, it will make you dance".  Referring of course to the local Visayan festival ati atihan where revellers dance in the streets. 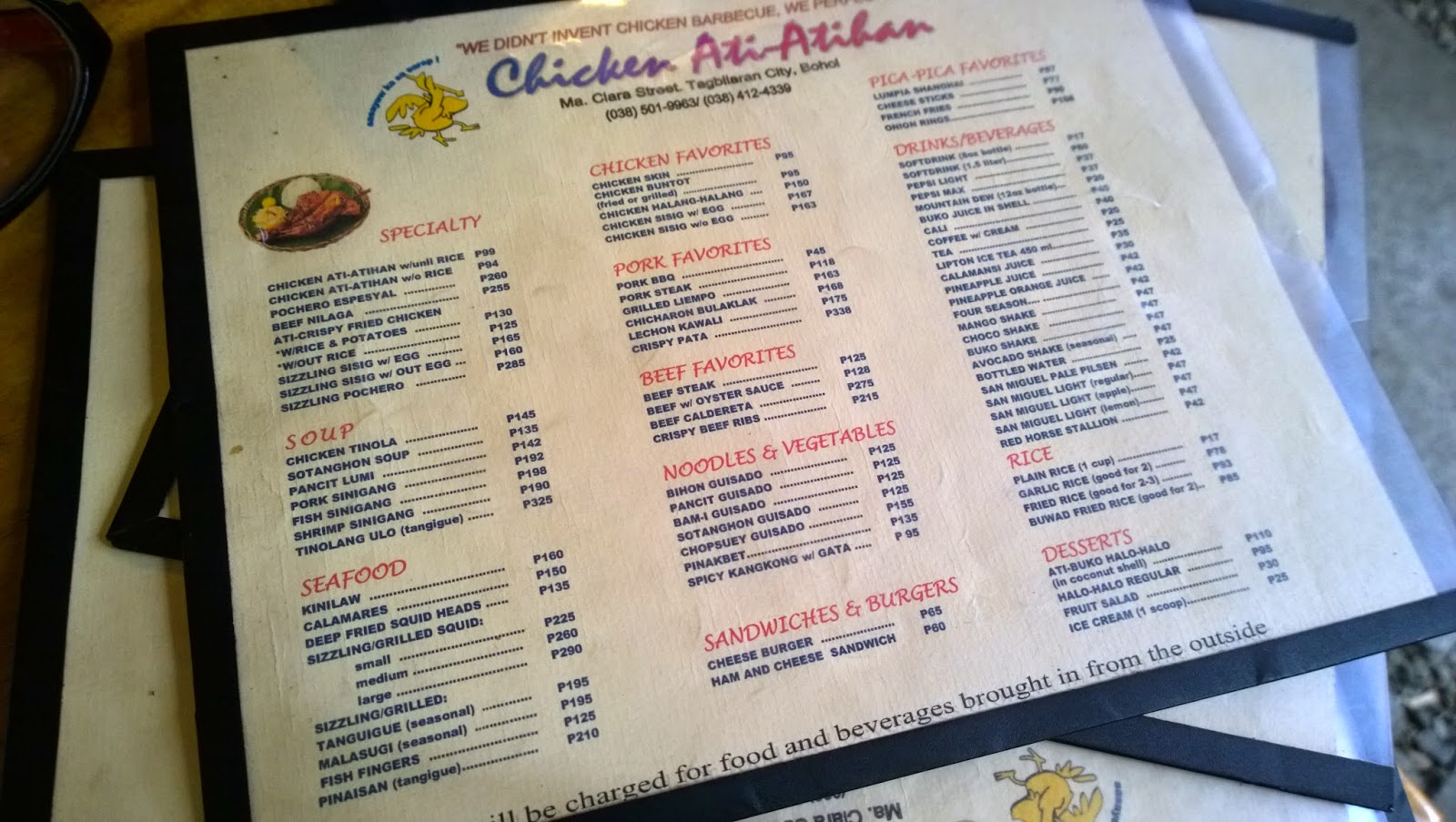 Aside from the specialty which is sinugba or grilled dishes, there are quite a number of choices from the menu.  Including the ever popular crispy pata, pancit, bistek and tinola which is really sinigang, done the Visayan way. 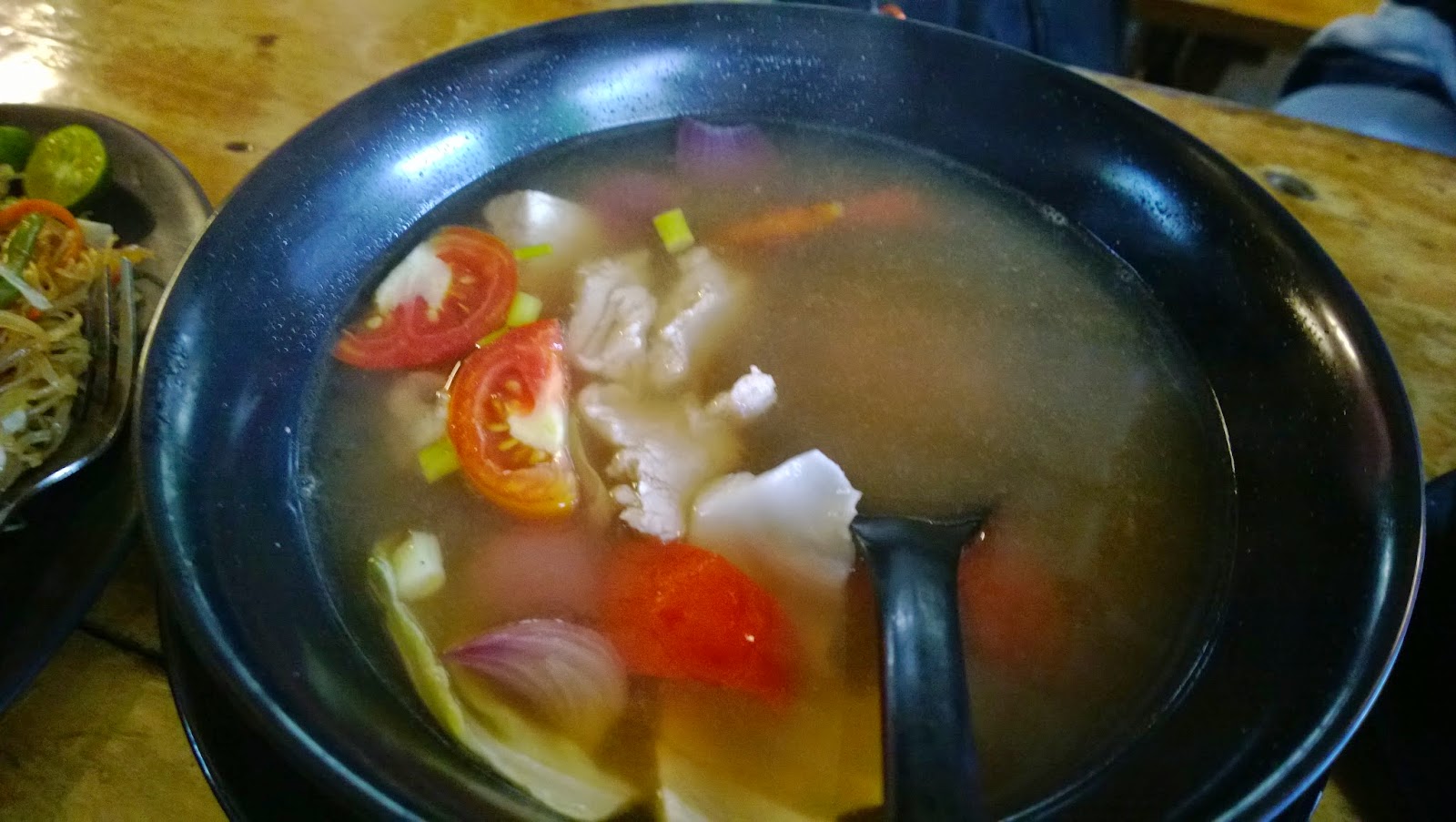 Our fish tinola was a good generous serving and refreshingly tart and gingery.   One order was big enough for all six of us to enjoy. 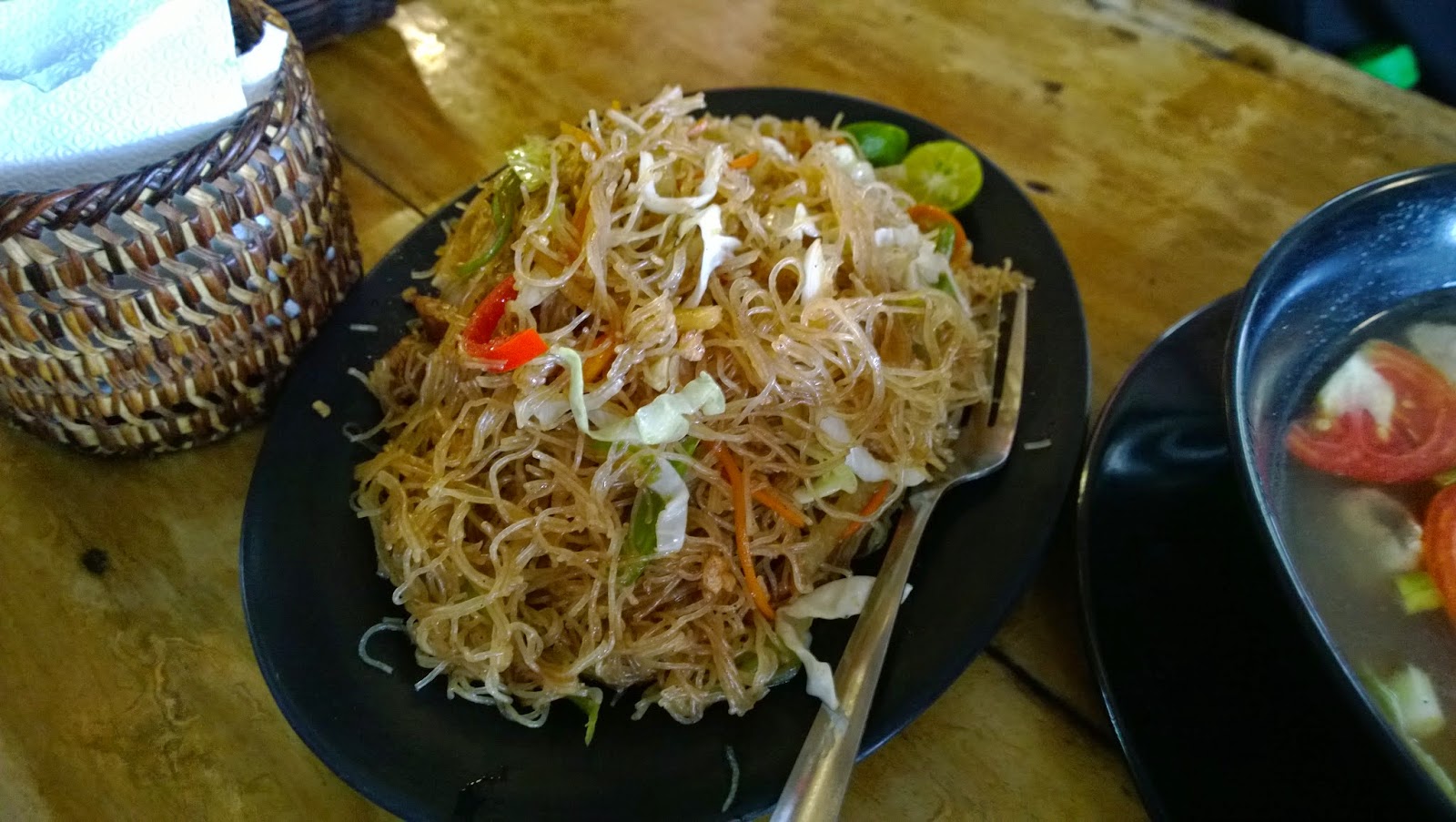 It wasn't anyone's birthday but I invariably order pancit bihon guisado. For me, a good cook will always know how to serve good pancit.  Sinugba ni Abdul served a more than decent version -- the noodles were neither oily nor dry but well cooked and tasty.  Like the tinola, it was a generous serving and we had to take the rest of it in a bag "for later". 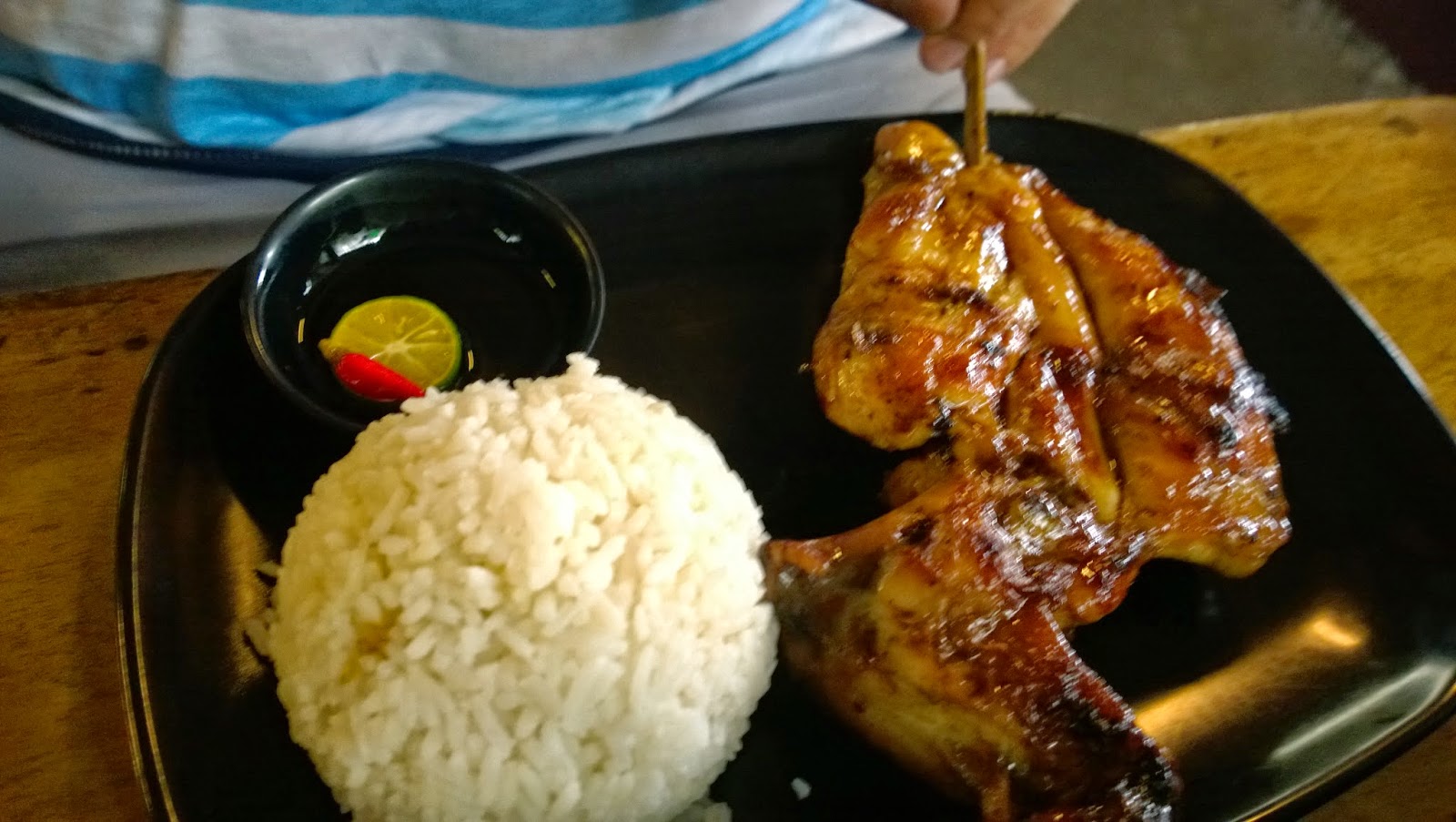 My son ordered his favourite "pecho with garlic rice".  According to him, it was far better than the usual inasal available in Manila -  marinated with the right blend of sinamak or native coconut vinegar and other seasonings like lemongrass, ginger and black pepper,  it was served hot off the grill, fragrant and juicy. Like a popular nationwide chicken chain, the inasal comes with unlimited rice. 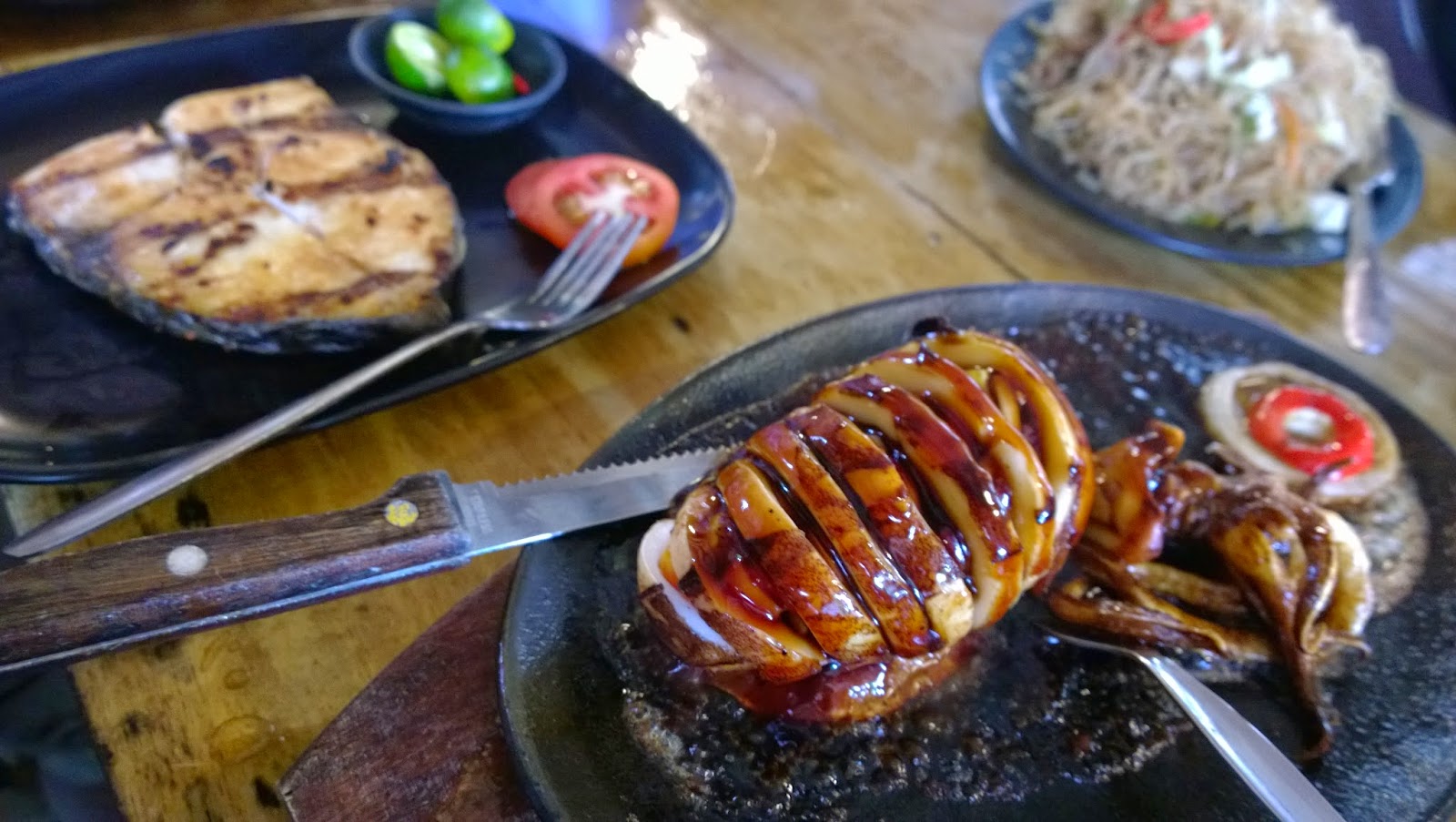 To round off our orders, we also had a  fresh slice of tanigue which was perfectly grilled and a hot plate of sizzling stuffed squid.
Every dish we ordered at Sinugba ni Abdul was good, every thing was delicious.  Satisfied and full from a delicious lunch,  we were now ready to discover the other wonders of Bohol!

"It was a dark and stormy night" at Ted's La Paz Batchoy, SM Bicutan

On our way home a few rainy weeks ago, we decided to get in out of the storm and have dinner at SM Bicutan.  There are not too many options aside from fast food outlets in this mall but there is one unpretentious spot in the basement that serves reliably good comfort food. 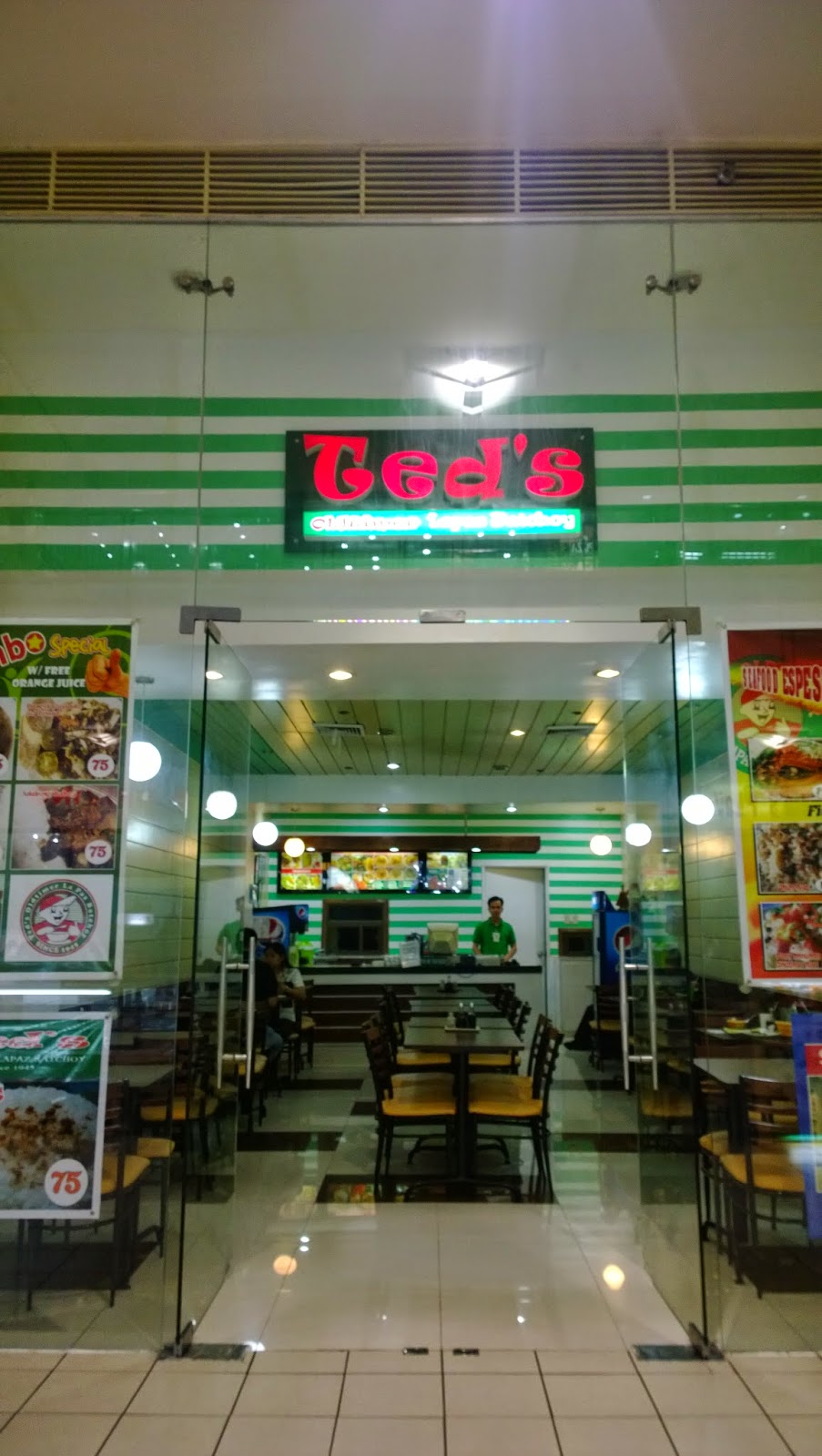 It's a strange but revealing name -- Ted's Oldtimer Lapaz Batchoy tells it like it is.  Yes, it's quite old, yes it's from Lapaz in Iloilo and yes, the specialty is that very simple, traditional Ilonggo noodle soup, batchoy.  Just the perfect comfort food for a "dark and stormy night". 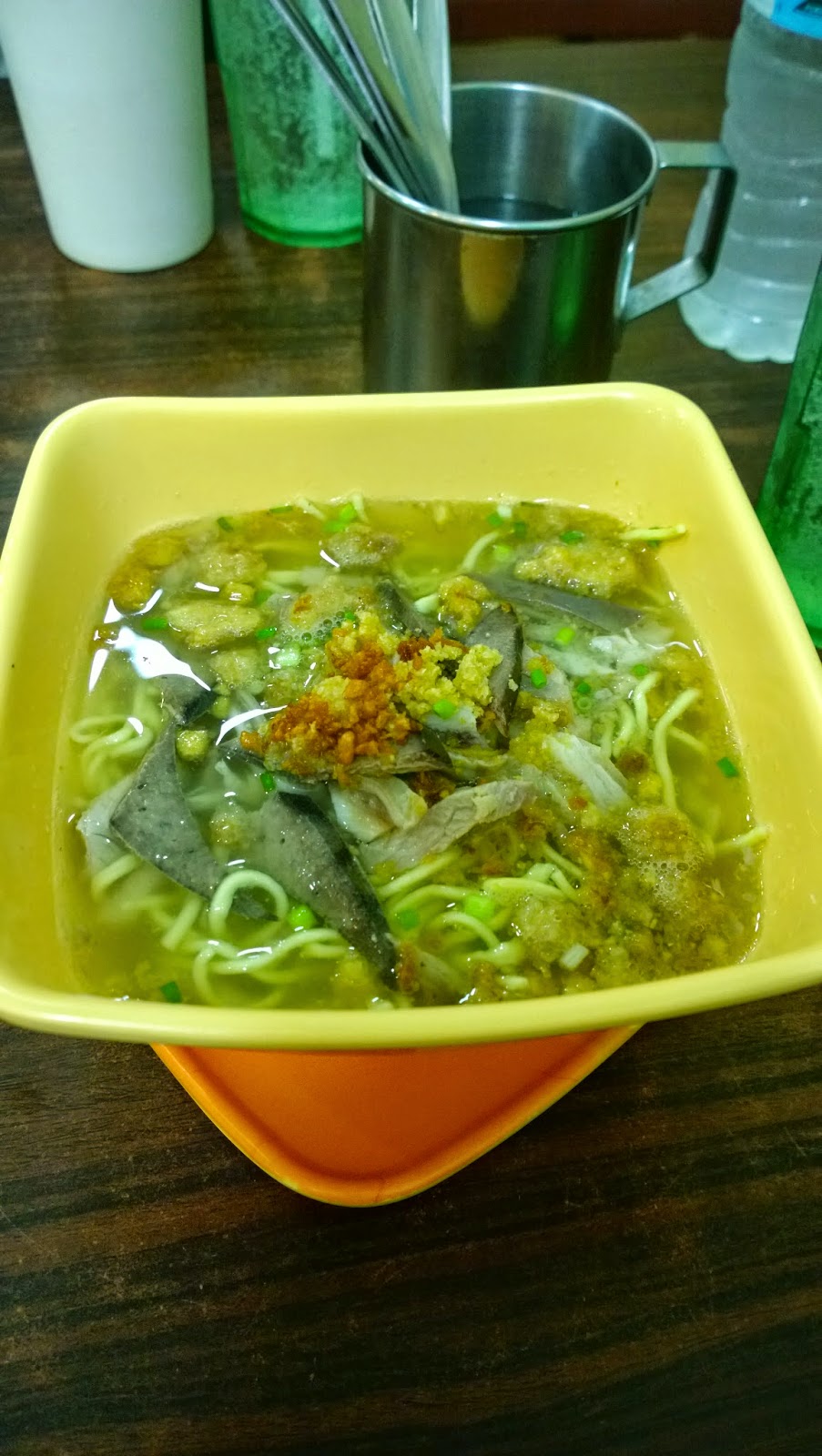 I prefer my batchoy with yellow egg noodles although Ted's also has thin, rice noodles or bihon.
We ordered the "special", which is a good sized serving.
Their batchoy broth is clear but the flavour runs deep.  I presume like home made batchoy broth,
it is made of pork and or chicken bones, slow cooked over a low fire and seasoned with that very Visayan ingredient -- guinamos.
Guinamos is made with either anchovies,  herring or other small fish that has been  brined, aged and fermented.  Authentic Ilonggo batchoy includes  guinamos -- which adds a complex saltiness to the soup.  It reminds me of the use of bonito flakes in dashi -- that quintessential ingredient in good Japanese soups.
What makes Ted's batchoy even more hearty is the generous addition of chopped chicharon  or pork crackling and slices of pork meat and pork liver.
If all these ingredients are a bit much, order some puto or pandesal to help cut through the richness. 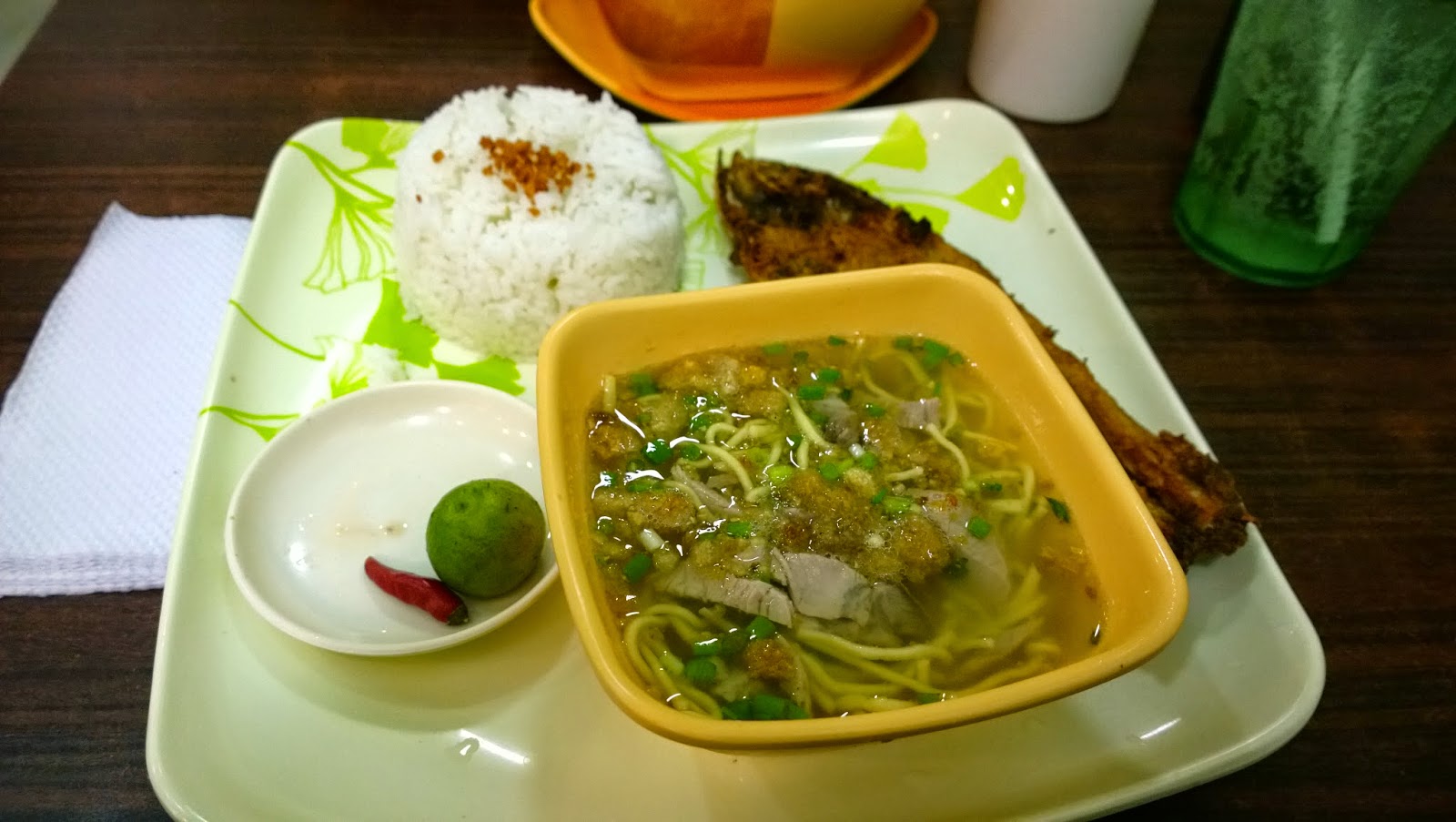 If you need a bit more sustenance than a bowl of fragrant steaming hot batchoy, Ted's has value meals that pair a mini bowl with viands like daing na bangus, grilled pork chop, even sisig and chicken, inasal or fried. 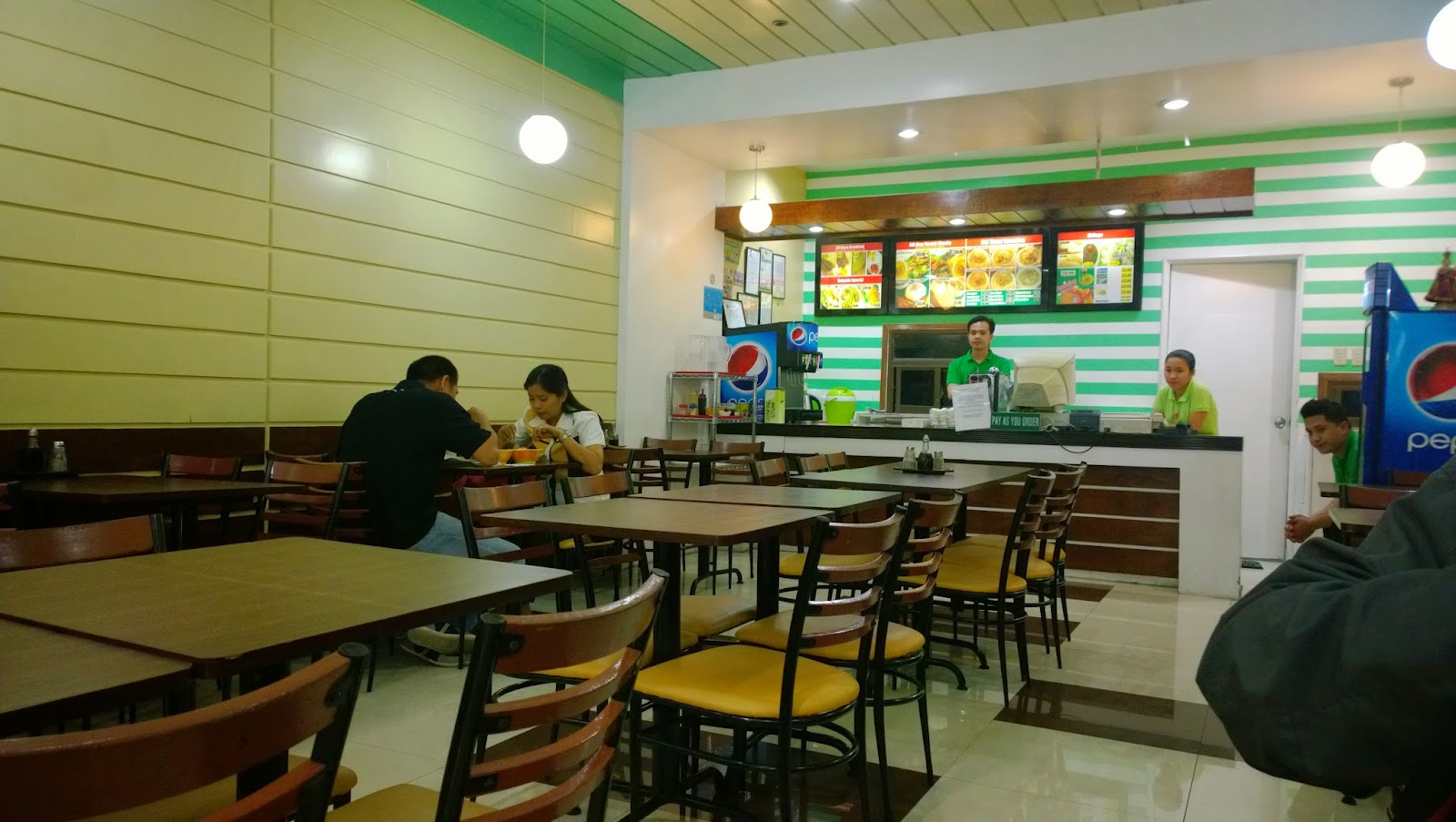 We enjoyed our unsophisticated, no frills dinner at Ted's.  It was a straightforward, honest to goodness taste of Ilonggo cooking.
Posted by Labrador Lady at 6:07 PM 1 comment:

A Return to my food roots -- Sincerity Restaurant in Binondo

Whenever I see an old style Chinese restaurant, I invariably remember my father and his penchant for comida china and hole in the wall panciterias.  Growing up in Malabon, he and I would often hop on a jeep and ride all the way to Sta. Cruz in Manila where we would get off and walk through Tomas Pinpin,  Salazar, Florentino Torres, Carvajal, Ongpin, Quintin Paredes, Escolta, Marquina, Nueva ... and just stop in his various favourites.
He had a special panciteria just for lomi, another one for chami, still another one for machang, and so on and so forth.
If we were celebrating something, a birthday or a promotion or yes, good grades on my part, we would always have a meal at Moderna, right across Sta. Cruz church where the owner was also a family friend.
Most  of our old haunts have disappeared, some have moved out of Chinatown but some are still there, surviving and thriving through changing food trends and tastes. 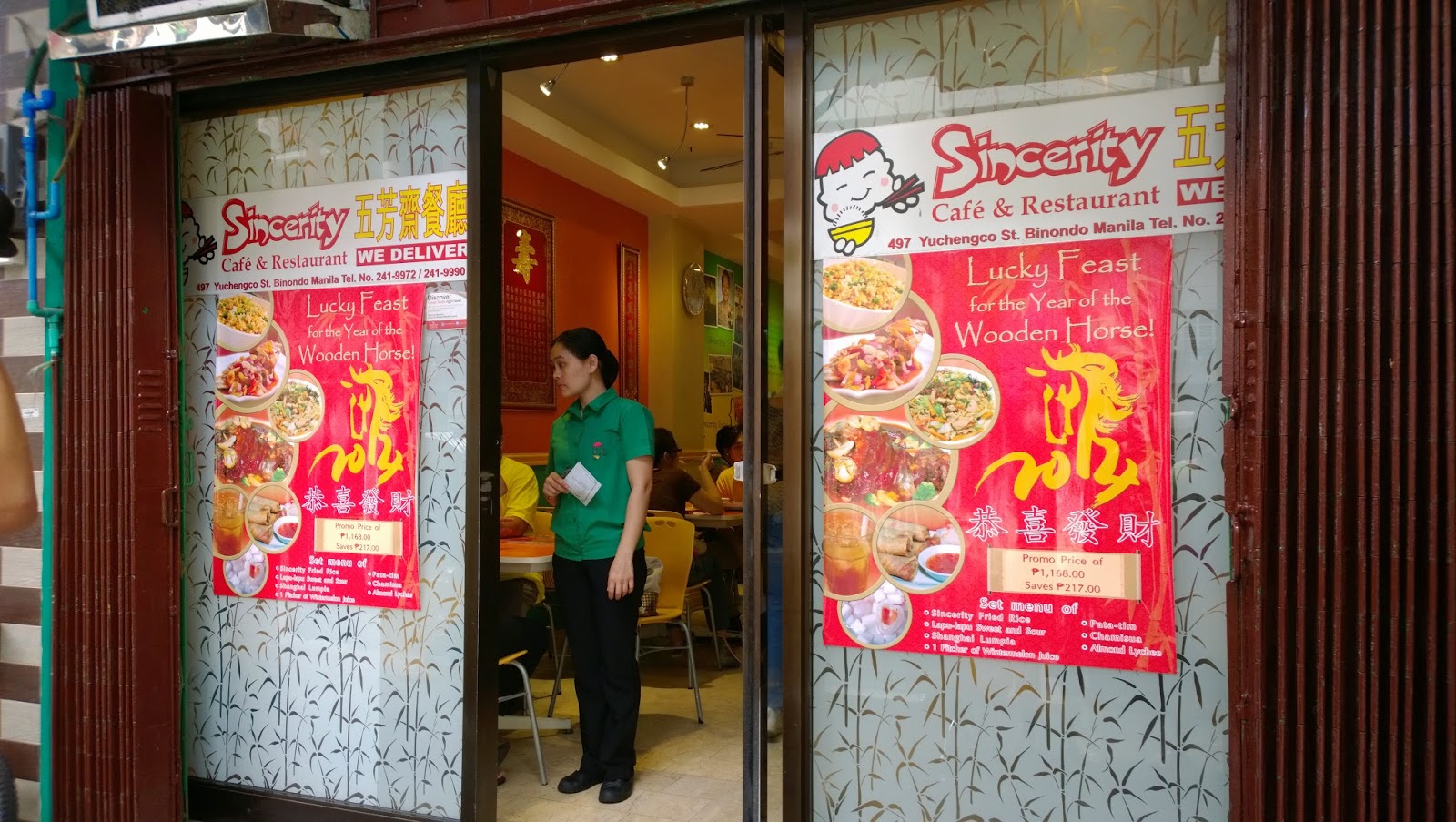 One of our favourite restaurants was Sincerity, which I am happy to say can still be found along Nueva Street.  A bit of personal trivia -- Sincerity and I were both born in the same year so I have a particular affinity for it -- not to mention its famous oyster omelet and fried chicken! 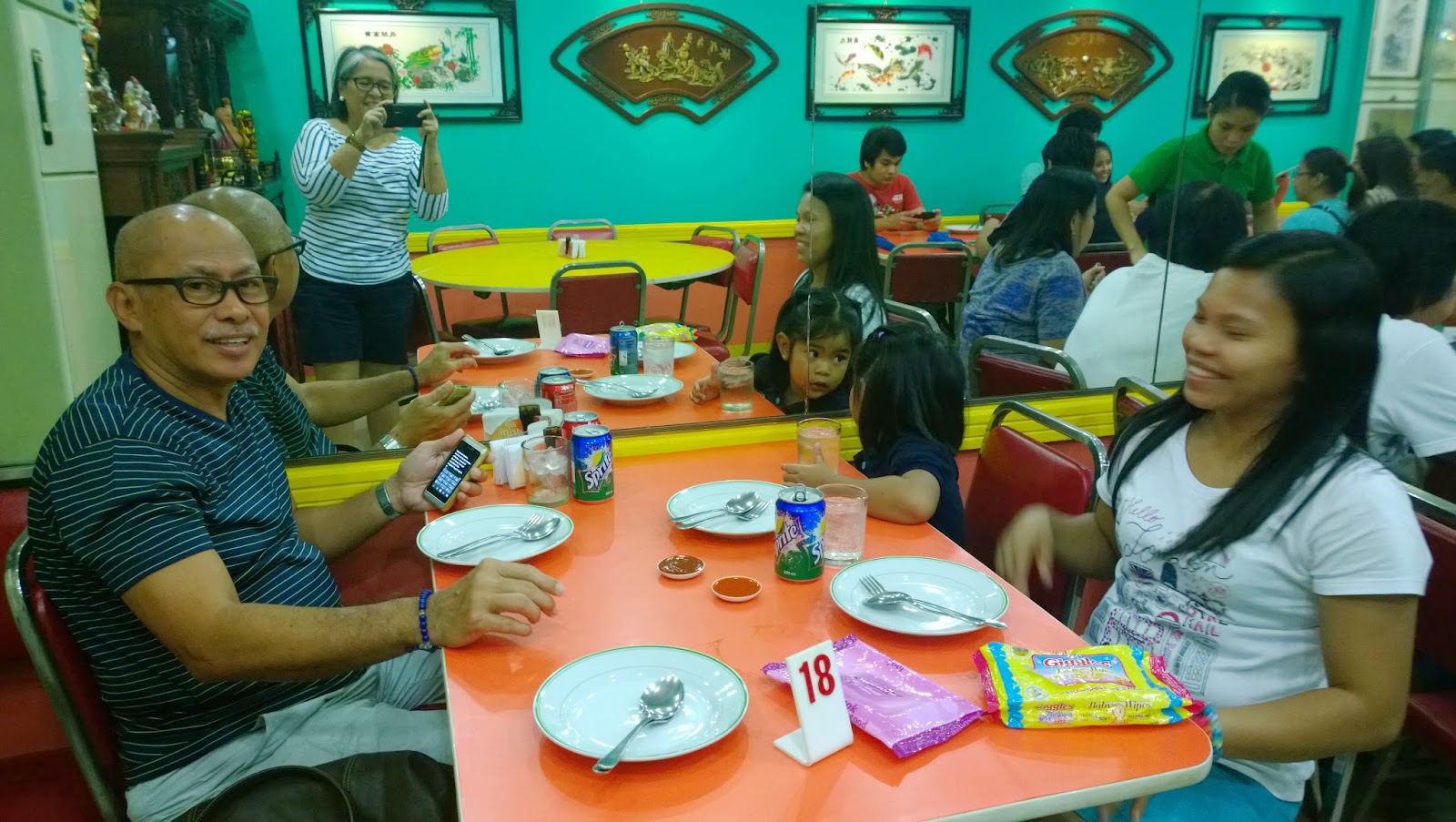 Last week-end, I decided to haul the family to Sincerity for a nostalgic (on my part) lunch.  We arrived just before noontime and had to take a table on the second floor - I was happy to see that despite the many fast food choices in the area, Sincerity still packs the crowds in. 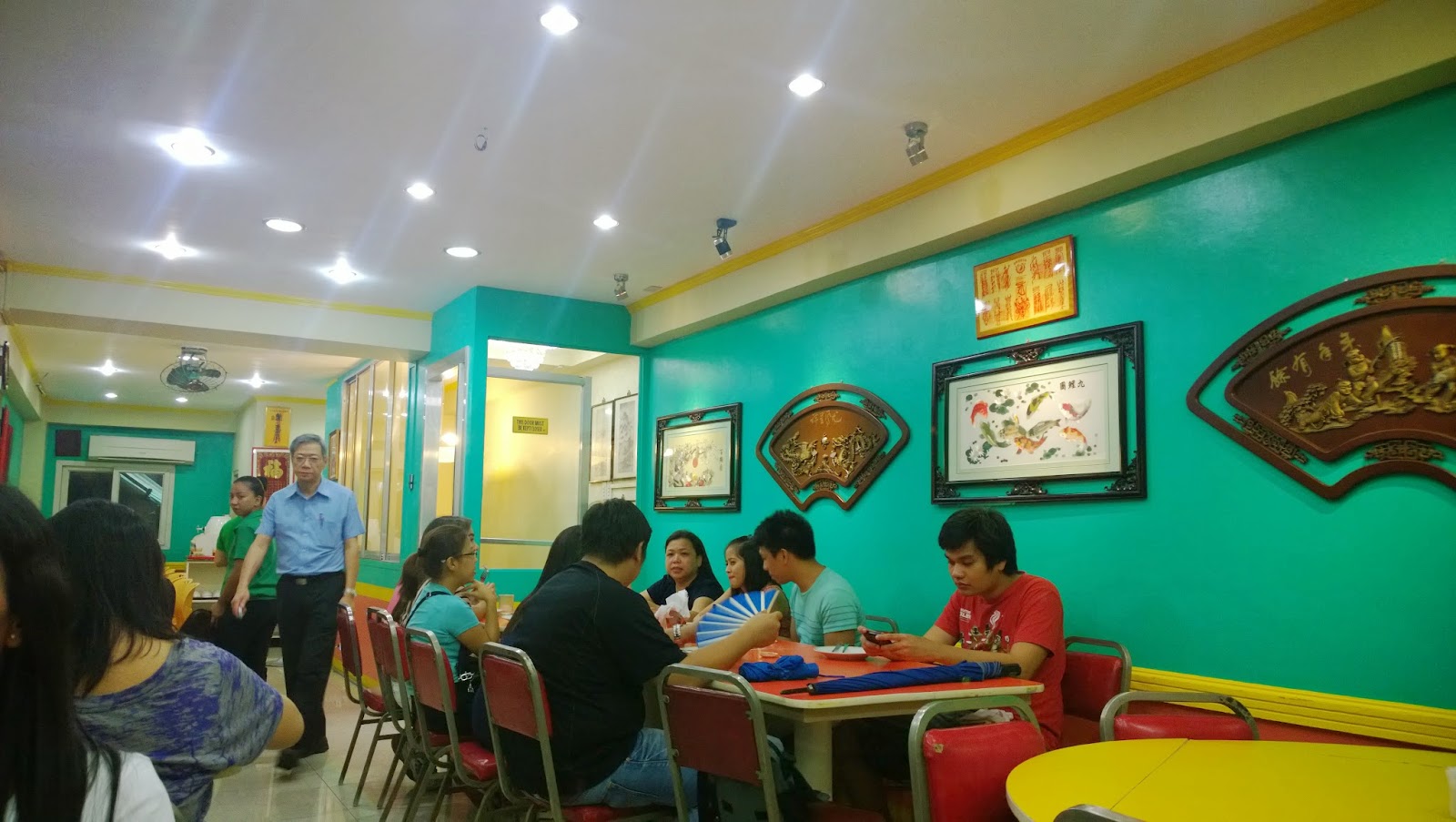 The second floor is actually less crowded and busy than the first floor, where the cramped kitchen is.
Most of the tables are occupied by big groups -- most likely officemates working in the Chinatown area. 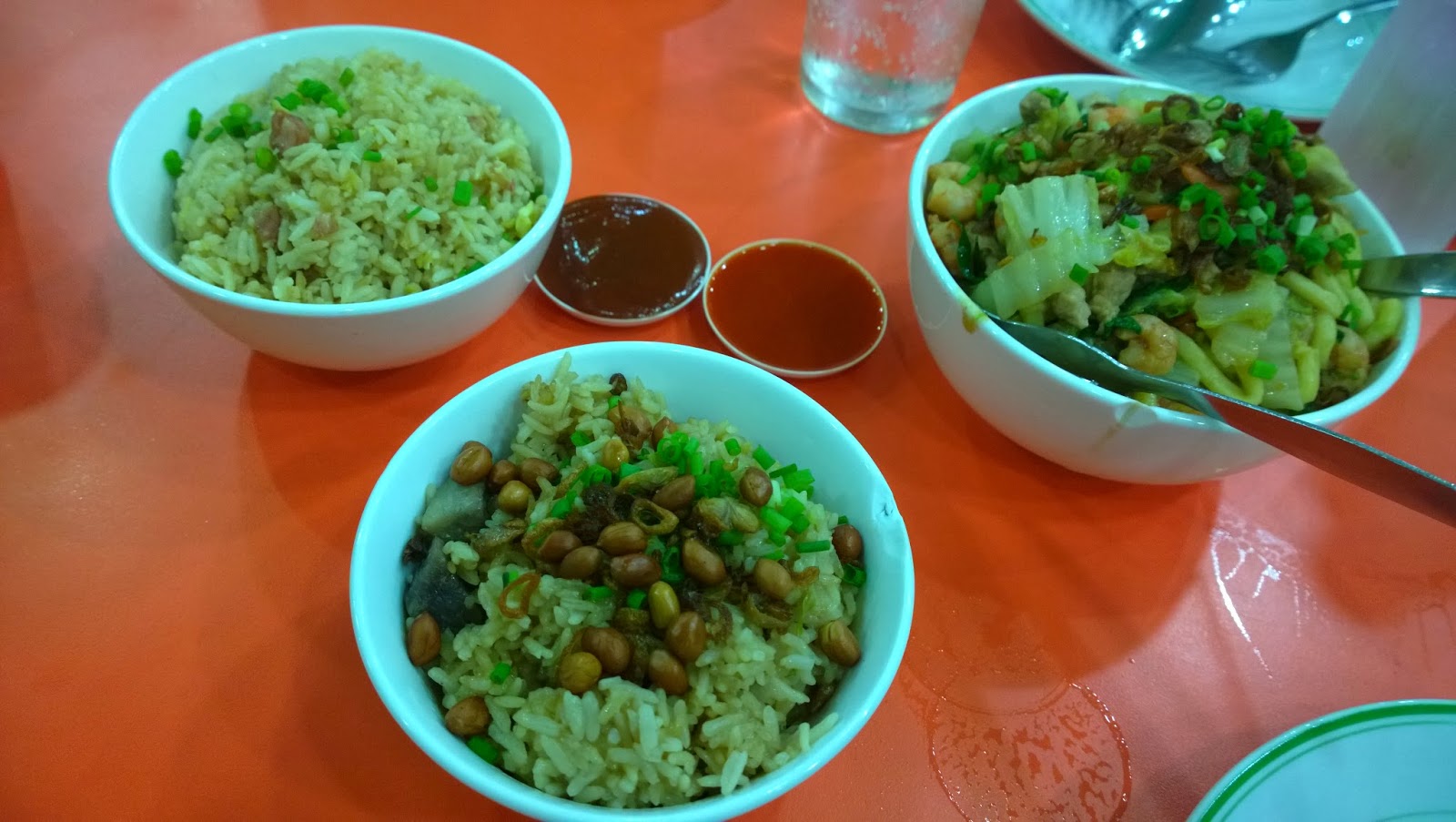 Since Jay is allergic to oysters, I couldn't order Sincerity's best selling dish.  I did get two kinds of rice -- a small cup each of kiampong and Sincerity fried rice. 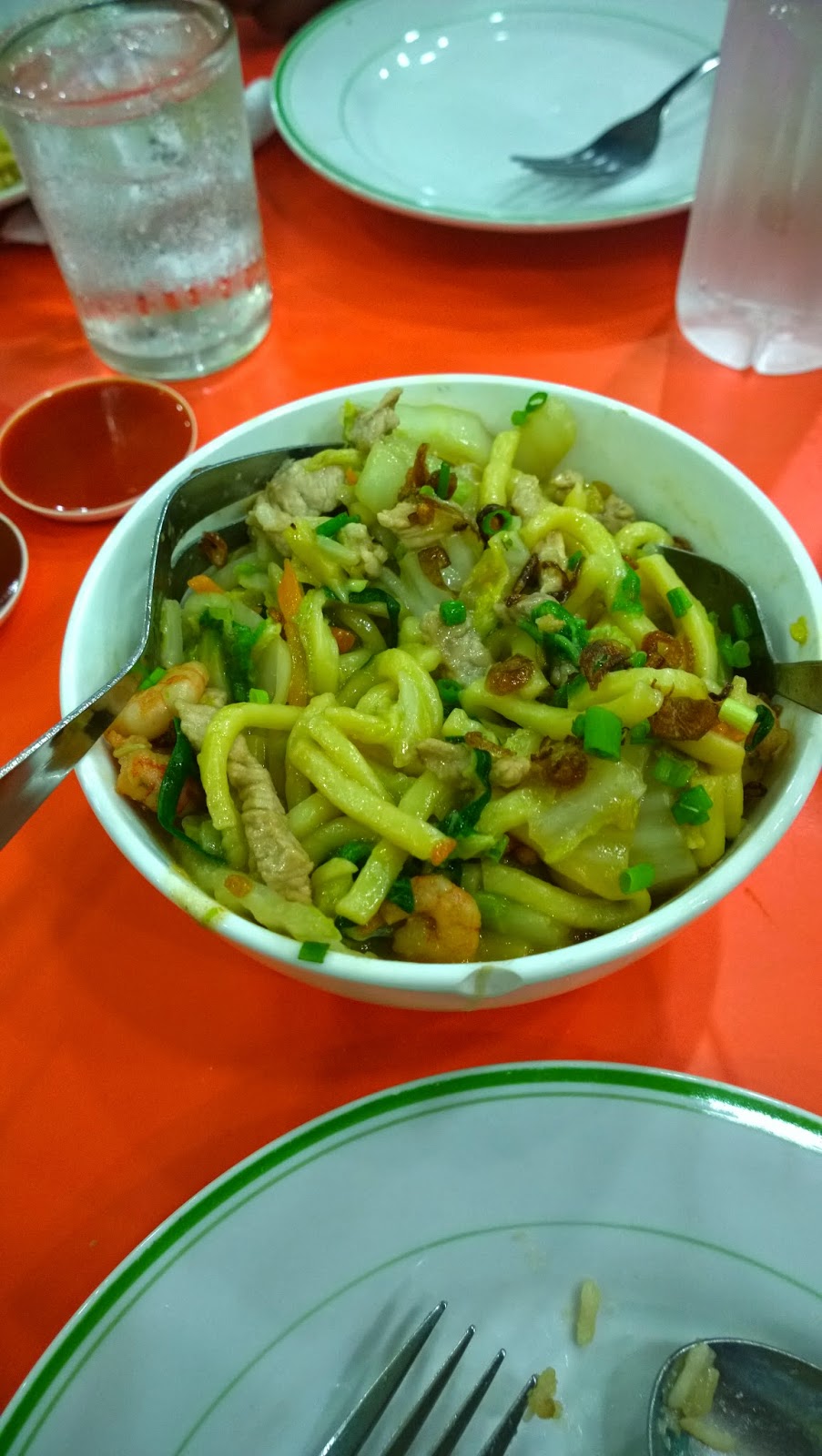 Sincerity makes very good chami guisado -- a very savoury noodle dish that uses fresh fat, yellow noodles.  It's like lomi without the soup.  My father and I used to eat chami in Chinatown -- for merienda, for lunch or dinner.
Sometimes, not content with having eaten our fill, we'd even take an order home, wrapped in banana leaves and thick wax paper.
Sincerity's chami has that old time familiar taste -- rich from all the meat and shrimp and heavy with the aroma of toasted garlic. 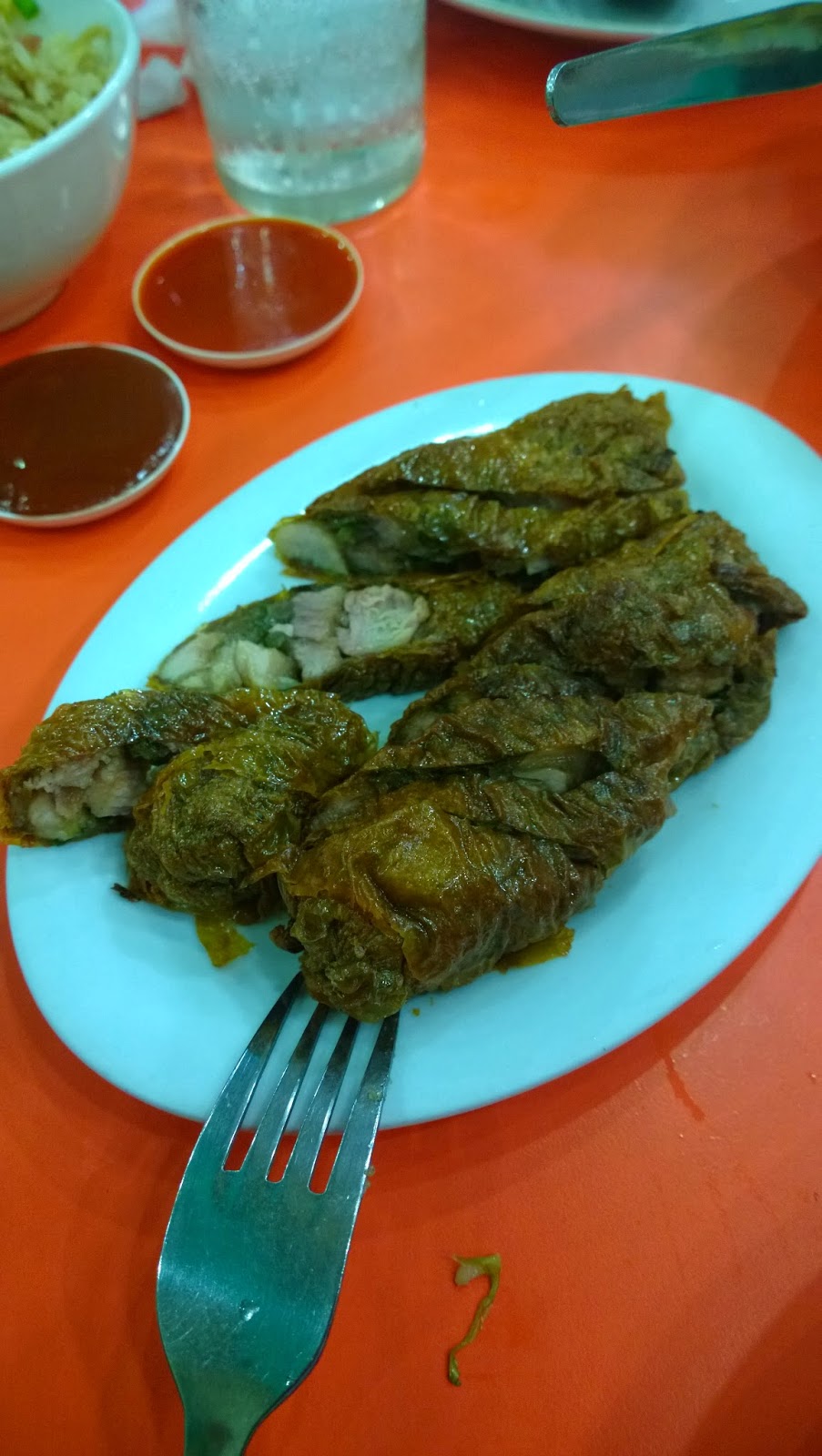 We also ordered que kiam or kikiam.   Unlike the minced mystery meat version sold along with fish balls in street corners, this is the real thing.  Chopped recognisable bits of pork and ham, wrapped in bean curd sheets and deep fried.  It was so delicious! 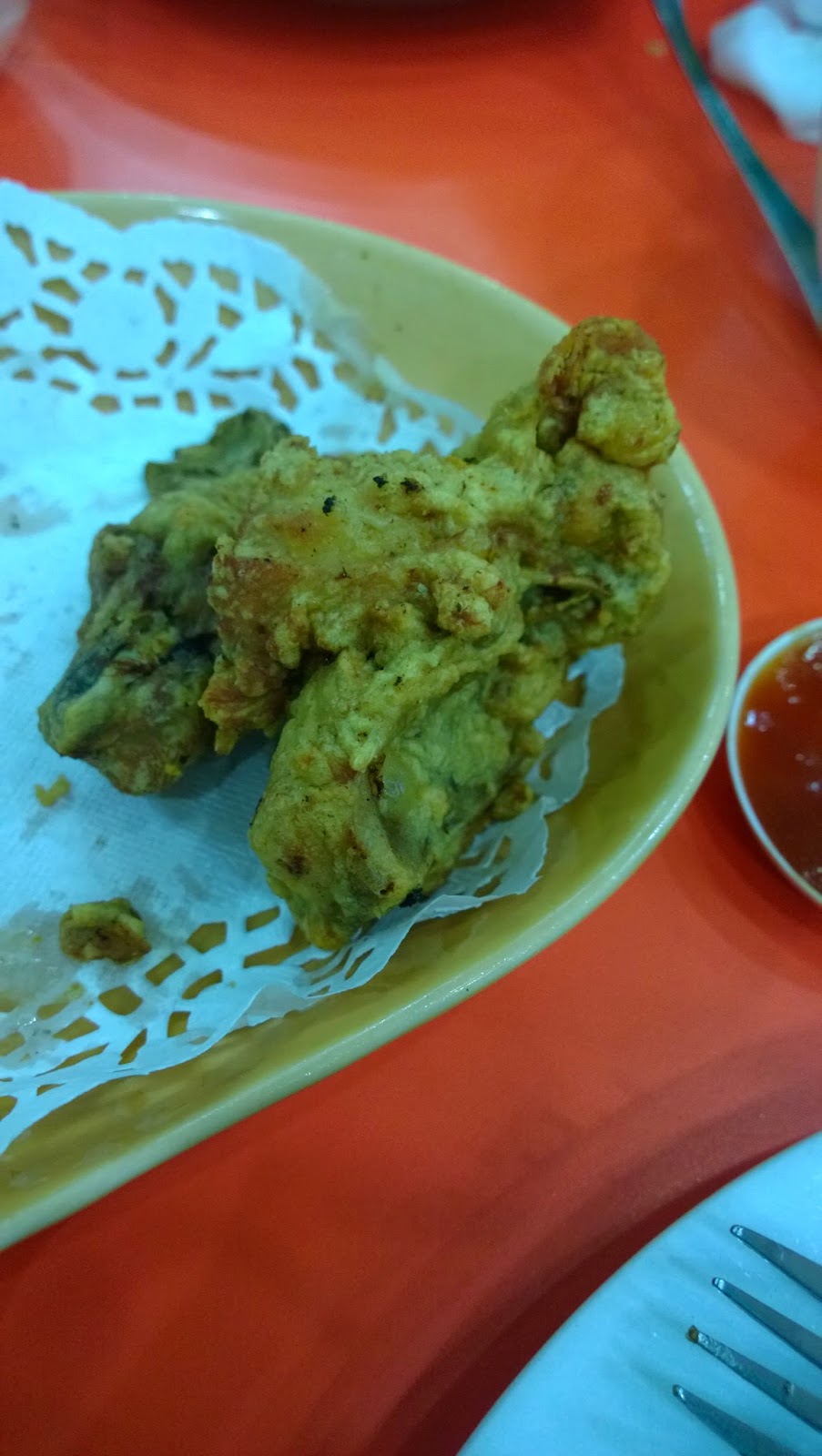 A meal at Sincerity is not complete without the star of the show -- the fried chicken.
Since it is freshly made and cooked when you order, it also is the last dish to be served at the table.  We had eaten most of our food when our half order of chicken arrived.
I am sorry to say that we lost all control and grabbed what we could -- thus, this is a pretty sad photo of the one piece which survived the onslaught.
It does not do justice whatsoever to this crisp, juicy, extremely flavourful fried chicken -- you can say that it tastes like home made, if you can cook as well as they do, at Sincerity Restaurant.
Posted by Labrador Lady at 8:41 PM 1 comment: