Pancit for Breakfast at Awi's in Chinatown

One morning a couple of weeks ago, I found myself in Binondo on an errand (food related of course, what else would I travel through heat and traffic for?) at the unholy hour of eight o clock in the morning.  First thought upon arriving ... where would I have breakfast? 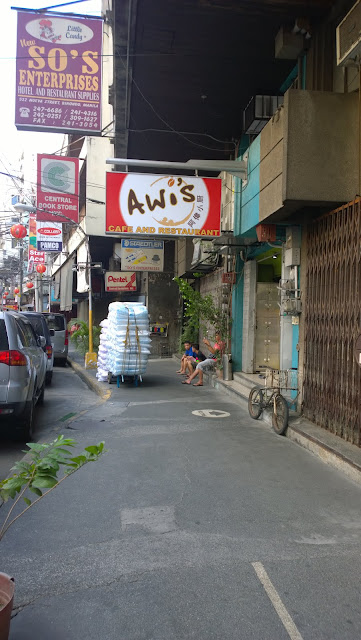 I shunned the usual fast food joints,  already busy with lines of office workers and headed towards Ongpin.  I wanted to find somewhere new -- where I had not eaten before and that is perhaps why
my feet, guided by the food gods,  led me to Awi's along Nueva Street. 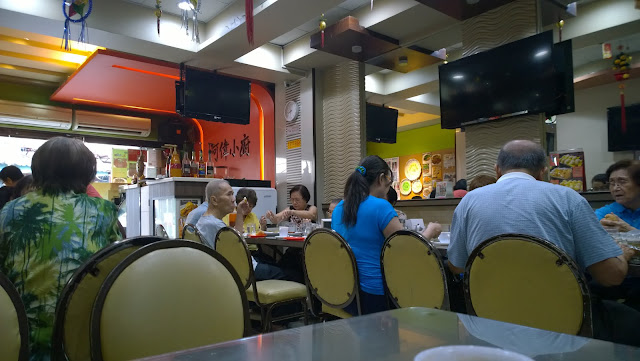 I was not surprised to see that the place was nearly full (I got the last empty table).  Since it's open
so early, I guess Awi's must have a pretty regular breakfast crowd.  Everyone seemed to know everyone else. 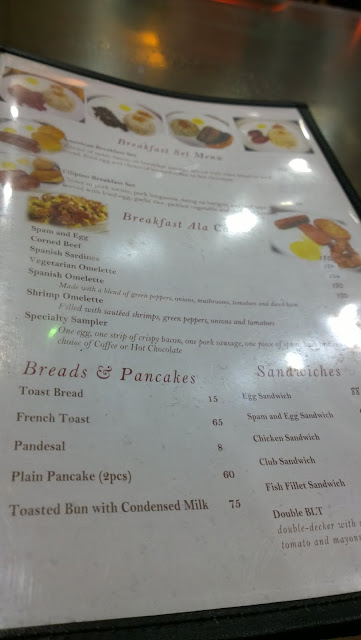 The breakfast menu was so ordinary and uninspired that I had a brief urge to bolt out.  Thankfully,
the friendly waitress said that I could order anything from the menu ("huwag lang siopao ma'm, wala pa kasi"). 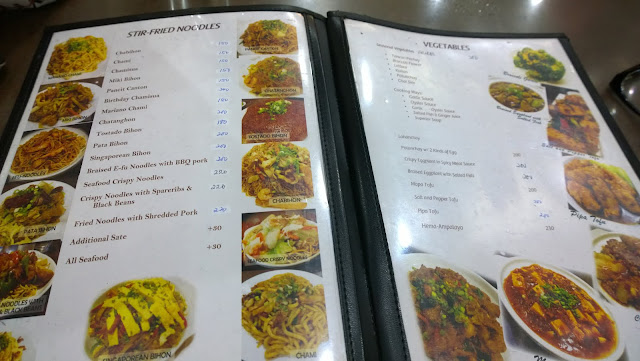 I was not in the mood for a lauriat for breakfast but the noodles section of Awi's had quite a long list of very appetising looking pancit dishes.  And this is just the page for the stir fried pancit,  there is another whole page devoted to noodle soups.
I could not make up my mind -- would I have bihon or canton?  Chami, sotanghon or chatanghon?  How about Singaporean noodles? Birthday chamisua?  But it wasn't my birthday yet! 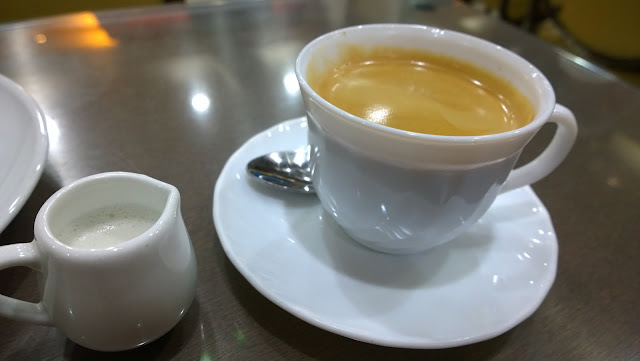 I could have sat there the whole morning procrastinating with my coffee but my waitress gently and firmly told  me  "Mariano's chami, special namin yan!  Kasi first timer ka, kaya tikman mo ang aming special".  What would I have done without her? 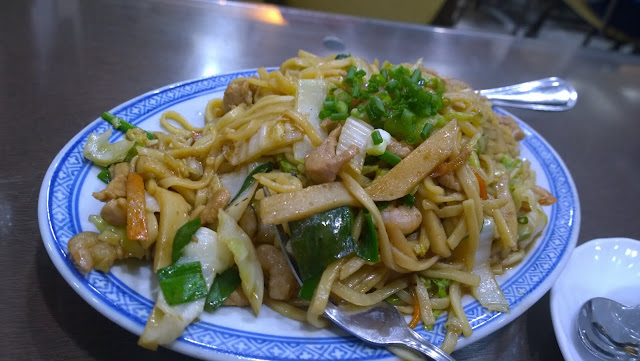 My Mariano Chami finally arrived (who is Mariano and why is the chami named after him?  I forgot to ask)  Fragrant with the essences of the wok it was just cooked in, this chami embodied everything that is so delicious about Binondo and Chinatown.   Every spoonful and (slightly) greasy but tasty bite brought me back to all the platters of pancit I had enjoyed before -- growing up and wandering around Chinatown with my father.  This was like my history of pancit in a plate. 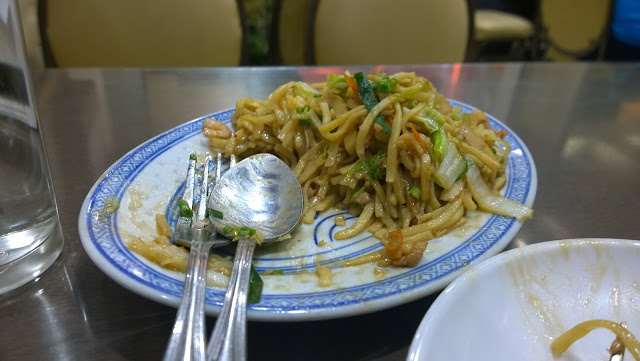 Dear reader, let me disabuse you of my special powers -- I could not finish the entire order.
It was good for two or even three people.  But I did justice to exactly half and took the rest home
(to be enjoyed for merienda later).
The nice ladies sitting at the table next to me said that next time, I should go on a Monday as
Awi's serves a very special lumpia only on that day.  I will definitely remember that! 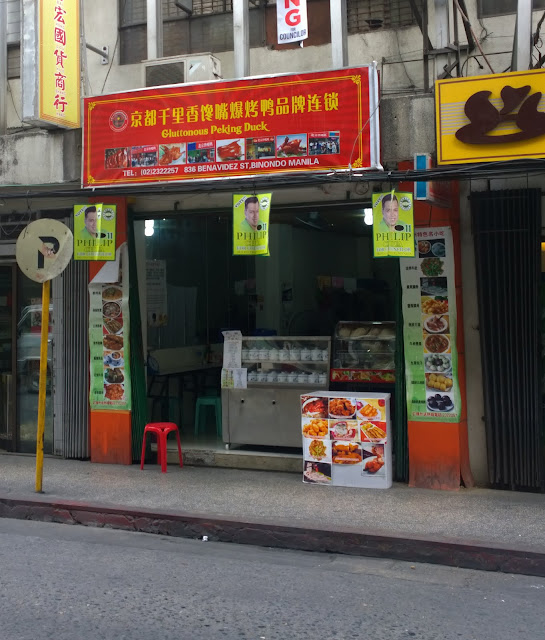 After doing my errands, I walked around Chinatown for a while and saw this sign.  Does it really say "Gluttonous Peking Duck"?  That's what I call targeted marketing!  I shall definitely be headed back to Binondo soon.

Posted by Labrador Lady at 12:26 AM No comments:

So much has been written about #squadgoals or #friendshipgoals, I thought I'd write about the long standing friendship shared between college buddies over the past 40 years.
2016 marks the 40th year of our graduation from the Ateneo de Manila.  It was a good excuse as
any to try and get as many of the "old" (literally and figuratively) gang together for merienda cena.   Our former department chair and beloved mentor  Fr. Alberto Ampil SJ,  had also just celebrated his 82nd birthday so it was both a reunion and a belated celebration at the same time. 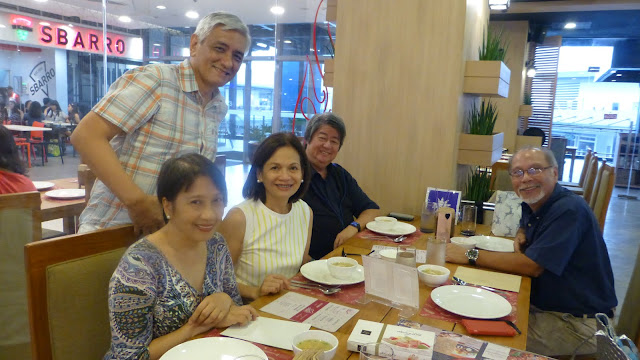 While some of us have kept in touch through the years, most of us had not seen each other since
we left the Ateneo.  I am happy to report that our friendship has survived the onslaught of years --
and while I did notice a few small changes, I think time has treated my friends quite well. 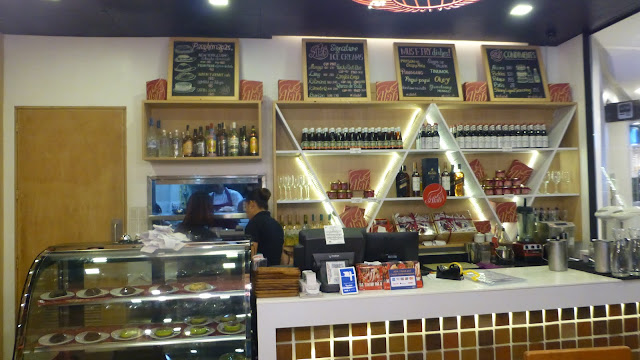 Friends from the Quezon City area suggested that we meet and eat at Alab, a Pinoy restaurant by
Chef Myke Sarthou popularly known as Chef Tatung. Well known in the local food scene,
Chef Tatung hosts cooking segments on t.v., is a frequent resource person on Filipino cuisine and
has a number of popular  restaurants. 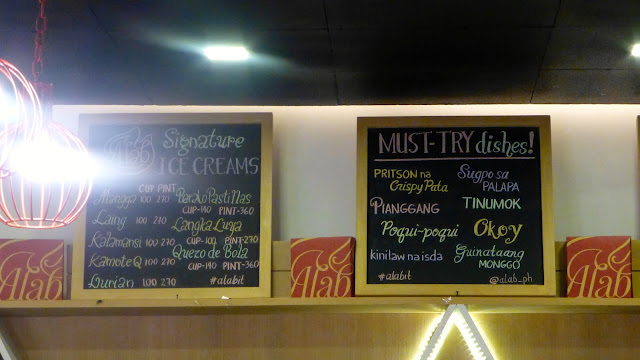 I first met Chef Tatung at a food forum a few years ago and again when he was celebrity judge at
a culinary competition we held for a client.  He is extremely passionate about Filipino food and
Alab is the perfect name for a restaurant that showcases this passion.
I was happy to see that his list of must try dishes was like a mini food tour around the various regions of the Philippines. 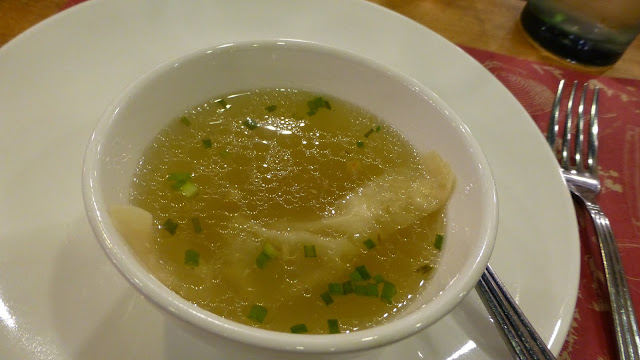 The early birds had ordered from the menu by the time I got to the restaurant.  First up was a
clear and clean tasting molo soup -- a bit salty for my rather bland palate. 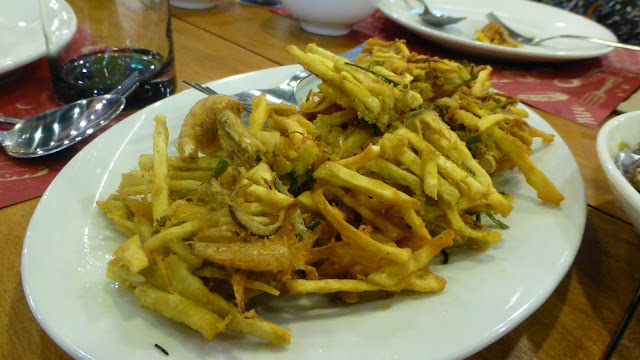 For appetizers, we ordered the waiter's recommendation -- okoy or vegetable  fritters.
They were so huge we had them sent back to the kitchen to be snipped into smaller pieces ...
not just once but twice!
Alab's okoy had large pieces of shrimp and instead of using the traditional green papaya and
kalabasa -- it had kamote sticks and togue shoots instead. Crisp crunchy and quite a delicious mouthful. 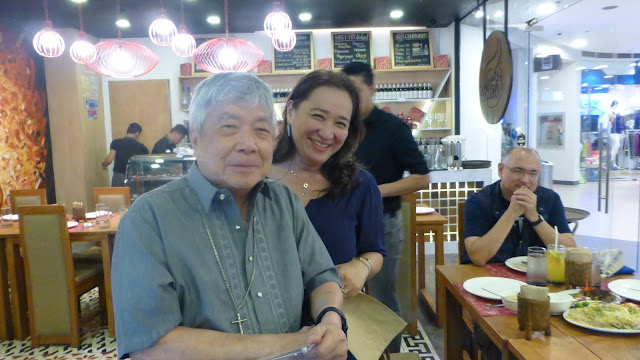 As you can see, we probably carried over some of our uncouth undergrad manners by starting to
eat even before our guest of honour had arrived.  Fr. Bert, as we all fondly call him, had been held
up by a meeting and came in as most of the food was already on the table (and some of it, in our mouths). 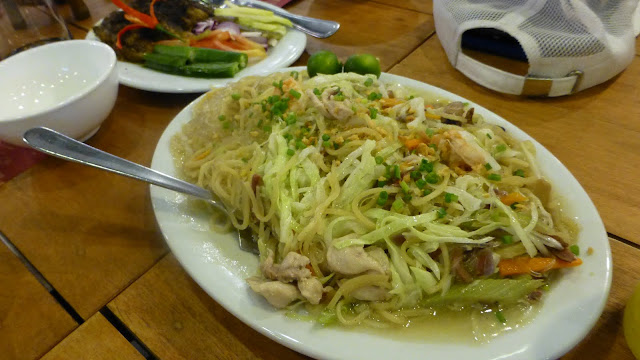 Because it was a belated birthday merienda cena, we had to have noodles for Fr. Bert's continued long, happy and healthy life.  Bam-i is a Visayan pancit that uses both bihon (rice noodles) and sotanghon (vermicelli) and cooks them together with meat and seafood and vegetables. 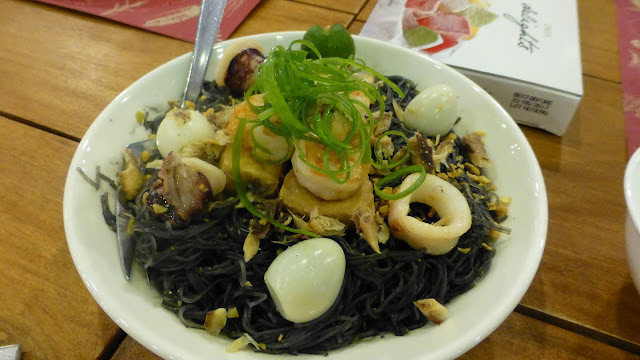 Alab's Palabok Negra is Chef Tatung's spin on the usual orange coloured noodle dish.  Definitely squid ink is involved plus a garnish of plump shrimp, garlic chips, calamari rings and quail eggs.
It even came with  the requisite calamansi.  Did it taste like palabok -- I closed my eyes and chewed thoughtfully .... hmmm not quite but it was good nonetheless. 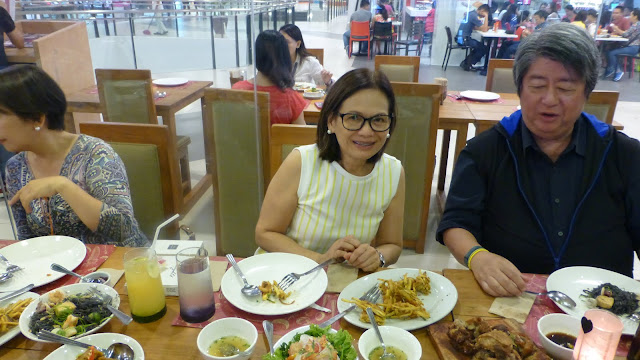 There's always one or two in a group -- but in our case, it seemed that all of us  had the tendency to over order!  It must also be proof of the appetising pull of Chef Tatung's dishes ... there was just so much we wanted to try. 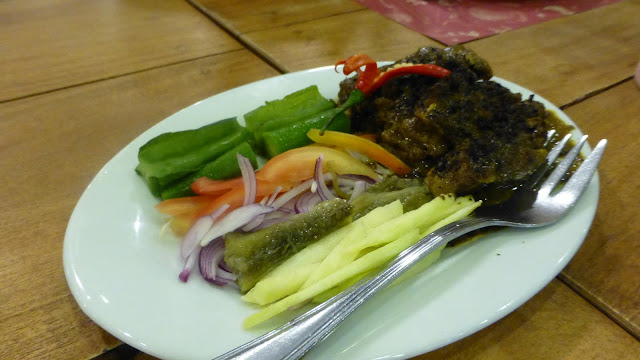 One of the dishes was so intriguing, we just had to order it. This is Pianggang,  a Tausug dish.
Chicken is cooked in coconut cream and native spices until tender.  It may not look very appetising but it was a creamy and tasty dish.  A few strips of green mangoes and boiled vegetables helped
cut the richness of the gata or coconut cream. 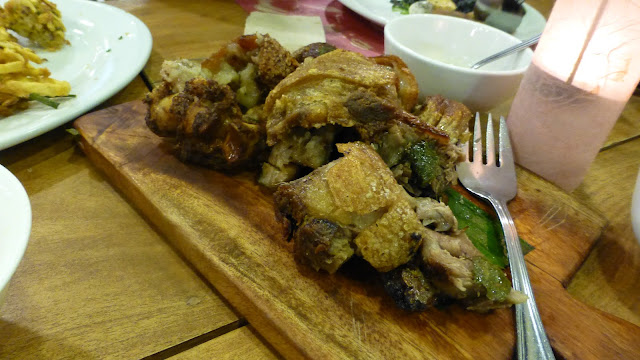 I'm glad that not everyone was watching their cholesterol that afternoon.  Or if they were, they
made an exception for this Lechon na Crispy Pata.  As they would say, "lechon na, crispy pata pa!".  The pork leg is first roasted then fried to a sinful crackling state.  I assure you, a bite is worth a statin or two. 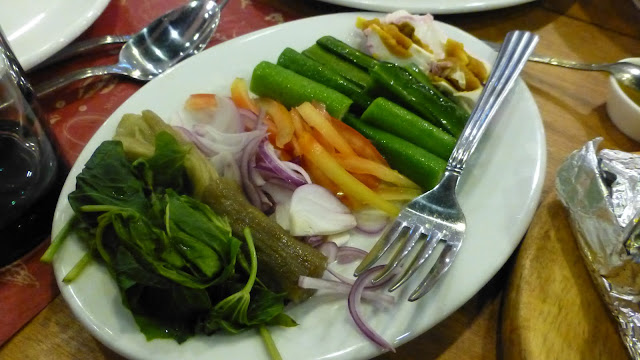 A typical ensalada of boiled vegetables -- kangkong, talbos, talong, okra, ampalaya with a dipping sauce of fish bagoong --  was our concession to healthy eating. 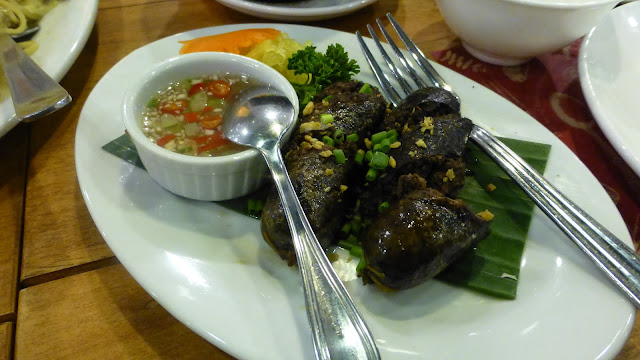 I am a fan of blood sausage so I just had to try Chef Tatung's Penuneng -- an Ilocano dish made of pork meat, innards and pork blood.   It was excellent and probably one dish I will travel all the way
back to Alab for. 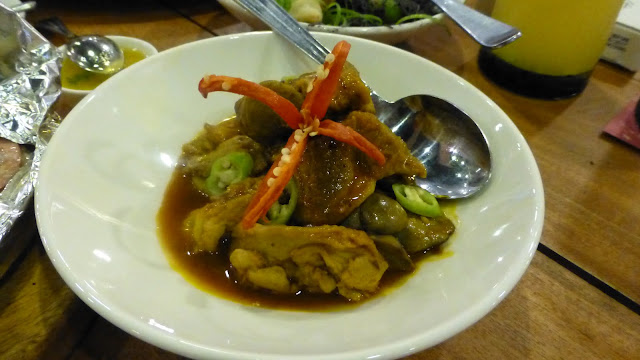 Perhaps you are all familiar with adobong puti and even adobong dilaw.   Alab has a dish called Adobong Pula which uses vinegar but no toyo or soy sauce.  It came with generous chunks of chicken, chicken liver and pork and a reddish sauce ... due perhaps to achuete?  Or maybe some paprika? 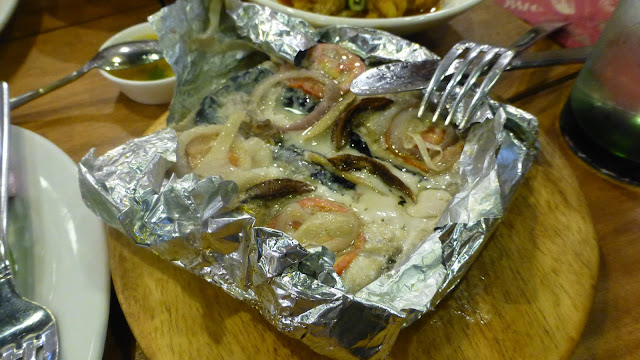 Somebody suddenly remembered that perhaps all the pork dishes were not quite the right stuff to
feed our  82 year old guest -- so we ordered Pinaputok na Bangus Belly, purportedly for Fr. Bert's dietary concerns, not that he had any.  Wrapped in foil and steamed, the belly was cooked with tomatoes, onions and something different -- strips of dried kamias fruit. 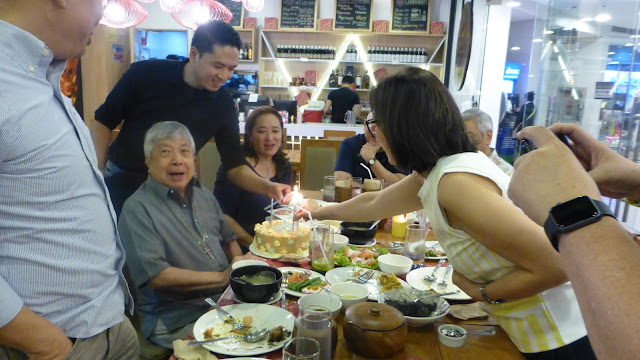 Our friend Ditas had thoughtfully brought a birthday cake for the celebrant so after demolishing much of what was on the table, it was time for Fr. Bert to blow out the candles and make a wish.
We didn't have 82 candles on the cake or we might have set off the sprinkler system. 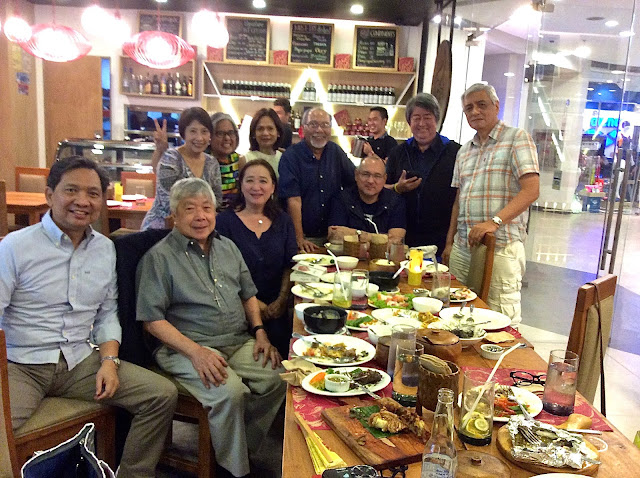 While some friends could not make it to the gathering and some of the barkada are also based abroad,  Fr. Bert was very happy seeing his former students -- most of whom he had not seen
since graduation in 1976! 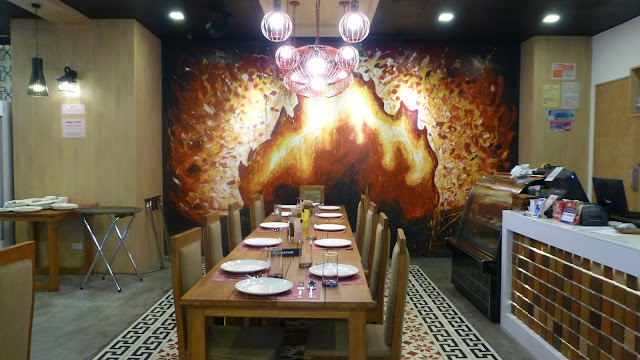 I think it was apt to have this reunion at a restaurant fortuitously called "Alab".  The word after
all means passion, it also means embers, and it means blaze.  Getting together, we found ourselves rekindling the flames of friendship,  which first ignited more than 40 years ago. 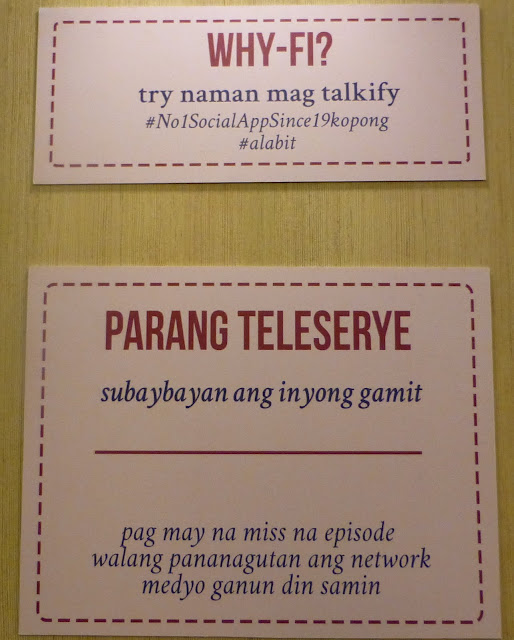 Alab had these witty reminders on the wall -- in today's digital age, it's so easy to be connected virtually but personal communication is still the best way to make one's presence felt. And to paraphrase the second sign ...

Posted by Labrador Lady at 3:09 AM No comments: