A journey of a thousand miles starts with a single step.  In our case, a journey of 350 kilometres started with a casual invitation ... "I'm going to the Imbayah Festival in Banaue next month, why don't you come?" I don't remember hesitating for even a split second before I said yes.
I had never been to Banaue and all of a sudden,  now seemed like the perfect time to go.
So, thank you Harvey for popping the question! 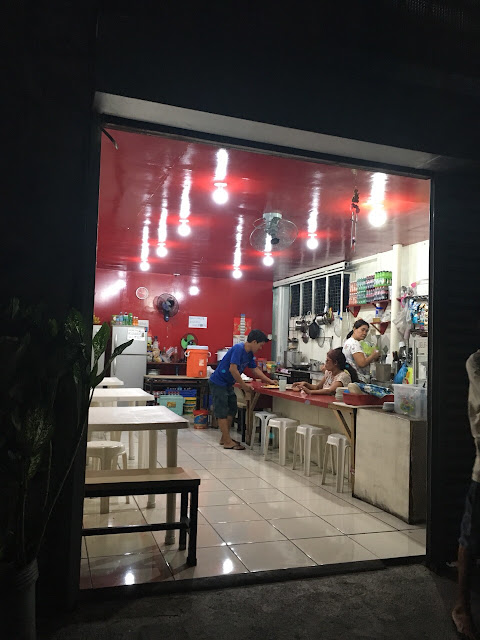 We took the night bus to Banaue, a 9 hour long ride.  A trip that long needed sustenance.
Good thing the area around the bus terminal in Cubao had lots of carinderias -- we were attracted
to the bright red ceiling and wall of this nameless one. 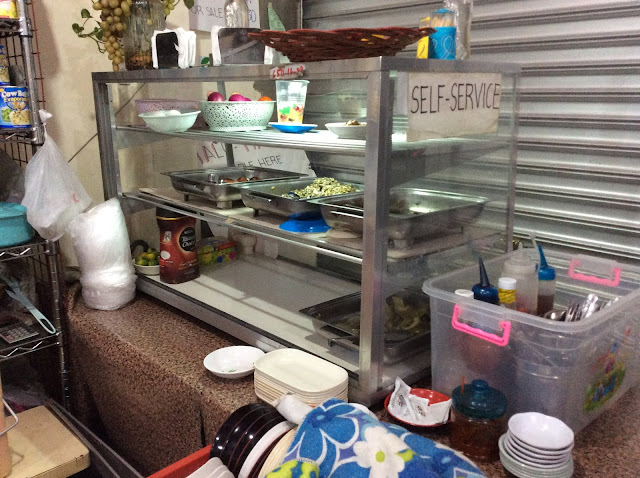 Since it was nearly 10 p.m there was not much food left on the eskaparate (display case).
Just a few pieces of fish, the local sausage longganiza and vegetables.  It would have to do. 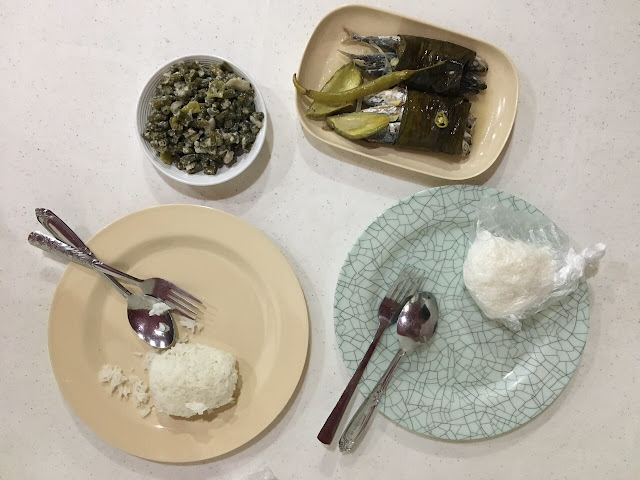 Our  "light" dinner consisted of chopped string beans cooked in a spicy gata or coconut cream and
paksiw na galunggong wrapped in banana leaf.  The fish was fresh and the vegetables were tasty.
A perfect meal combination -- this plain carinderia with its honest, homespun cooking could give more expensive Filipino restaurants a run for their money! 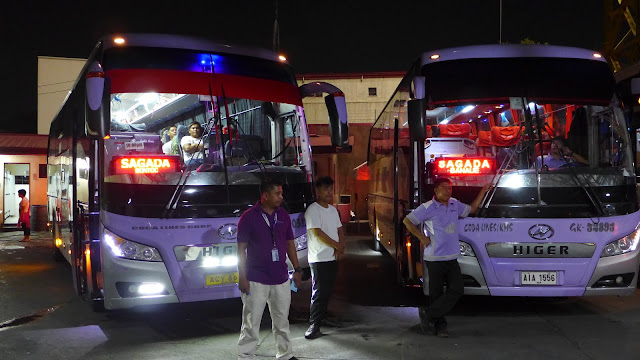 While there are a number of bus lines plying the Manila - Banaue - Sagada route, we decided to take Coda Bus which advertised "super deluxe" buses that came with its own toilet.  The buses were new although I wasn't so keen on the lavender and dark purple colour scheme. 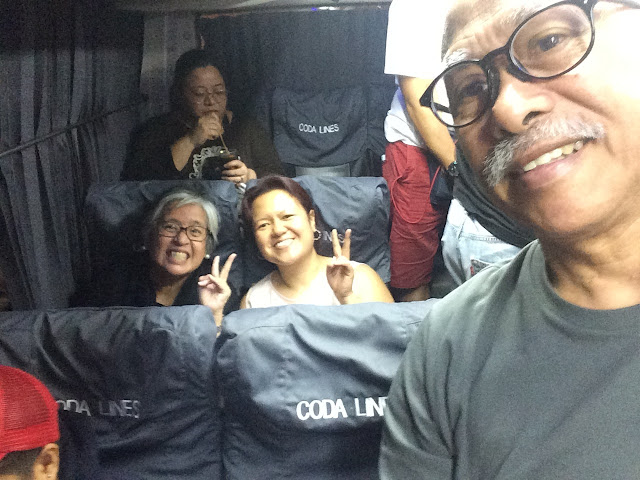 You can buy bus tickets online and choose your seats as well.  Time for a quick selfie before the bus pulled out of the terminal -- just a few minutes past the designated departure time. 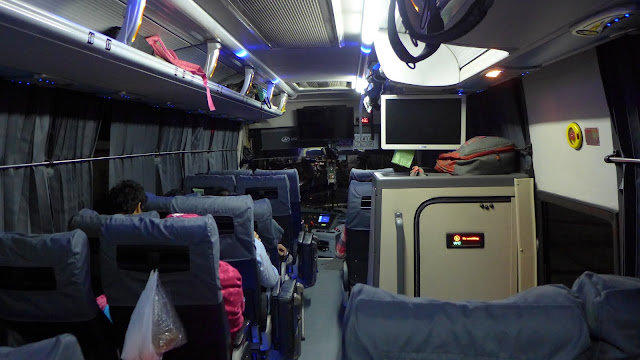 Coda keeps its buses clean and well maintained, I was quite impressed.  I wondered if the toilet would be a bit smelly as it would be in use throughout the trip but I need not have worried at all. 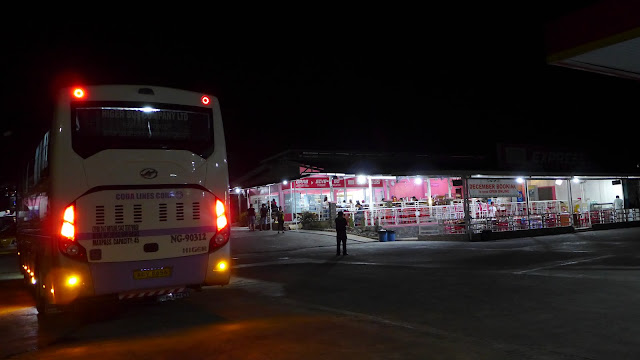 I slept fitfully,  waking up every so often.  The bus drove straight for about 6 hours until it pulled in to a rest stop in Aritao, Nueva Vizcaya.  This is the Pink Pantry -- with a convenience store, a cafeteria and the most important thing for travellers (at least those who did not ride a Coda Bus),  relatively clean pay toilets. 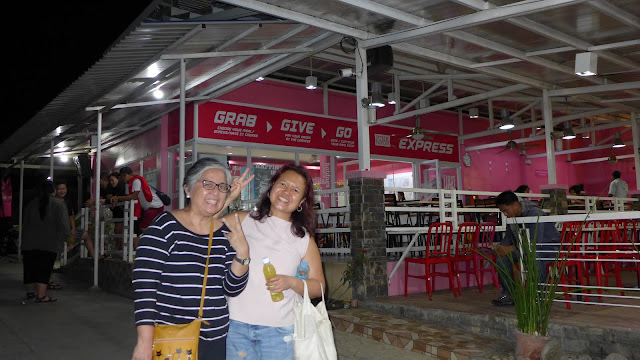 The buses stop for about 20 minutes -- giving the drivers a quick rest and a chance to sit and eat.
We spent our time checking out the convenience store where we were tempted by an array of regional delicacies like silvanas from Nueva Ecija, pastillas de leche from Bulacan even otap from Cebu!  Now that travelled quite a long way. 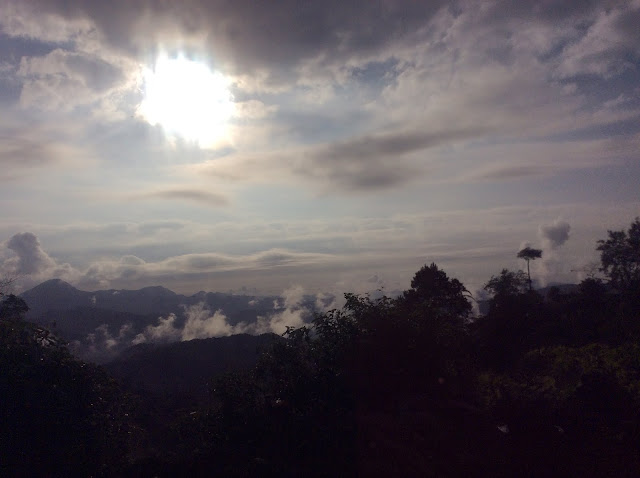 I had planned to stay awake till the bus pulled into Banaue but I must have fallen asleep again.
When I woke up, it was way past sunrise and we were navigating the twists and turns of the mountain road.   In a few minutes, I would finally see Banaue!  The adventure was about to begin.

Posted by Labrador Lady at 12:58 AM No comments:

Tokyo Tales Part 3 - A Haiku in the Park (Hotel)


According to an industry survey, Tokyo has about 100,000 hotel rooms. Thirty of the most interesting and unique ones are at The Park Hotel Tokyo, located in the quiet yet accessible business district of Shiodome.  It is also my favourite hotel -- a refuge in this huge, hectic mega-city. 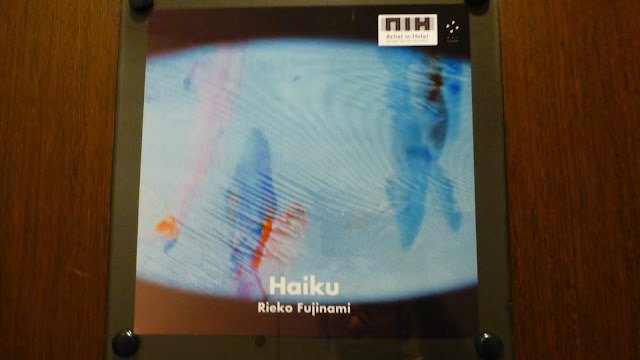 What makes these rooms at the Park Hotel so special? They are called Artist Rooms,
each one designed and done by noted contemporary Japanese artists.
The Artists Rooms used to be spread out in different floors but they are now all clustered on the
31st floor.
The project is not new and has been ongoing for several years now. It is a way for the hotel to bring art and hospitality together, creating unique and lovely spaces for its guests.
On this last visit to Tokyo, I stayed at the Haiku Room by Rieko Fujinami. 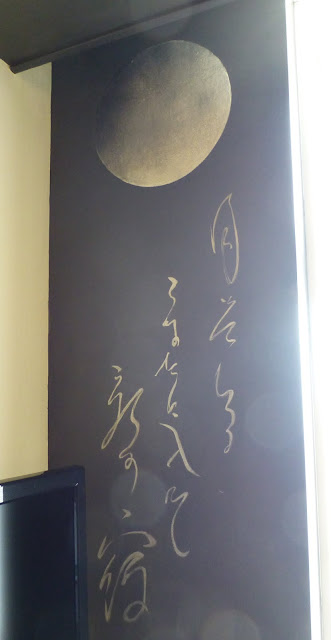 Each room is done in the featured artist's distinctive style and each artist chooses a theme to "play" with.  The theme of my room was "Haiku" with a poem by noted Japanese poet Basho written on a scroll on the wall.  In english, the haiku goes "The moon a sign / this way sir,  to enter / a traveller's inn".  Such an appropriate and elegant way to welcome the guest into the hotel. 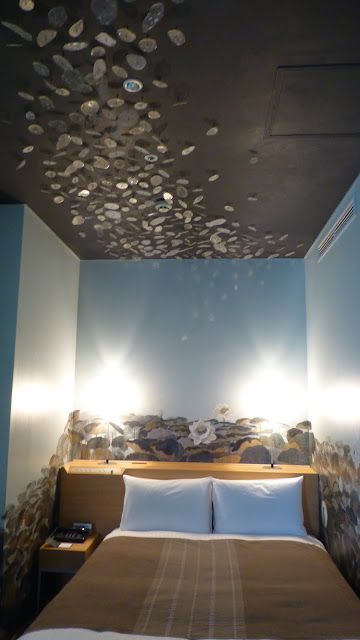 I had stayed in an Artist Room before (see previous post https://porkintheroad.blogspot.com/2015/04/sleeping-under-sakura-tree-park-hotels.html)  but on
this trip had opted for my regular room with a view of Tokyo Tower.  Perhaps because I am a
member of the hotel's loyalty programme and perhaps because I have stayed so many times in the past,  I was upgraded to this single room.
While it was a bit on the smallish side and I hardly had a view but I could sleep surrounded by art --  on the walls and the even on the ceiling. 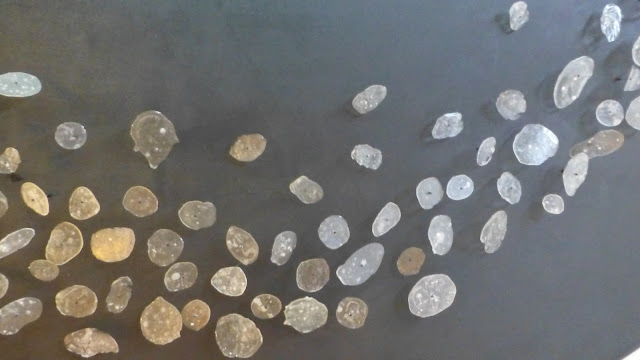 To add texture to her work, the artist Fujinami san had attached irregular shaped discs which symbolised the Milky Way.  It shimmered throughout the length of the black painted ceiling.
I lay in bed and let my thoughts meander among the stars. 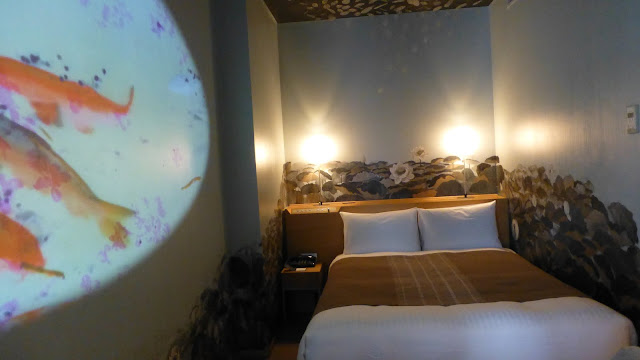 Lotus pads and the occasional blossom encircled the room, painted on the walls around the bed and cascading down to the floor.   On the large blank wall koi in different colours floated lazily in the lotus pond, not in still life but swimming serenely, brought to life via the wonders of a video shown on an LCD projector.    I did not have to hie myself off to a Japanese garden,  the lotus pond had been brought right into my room. 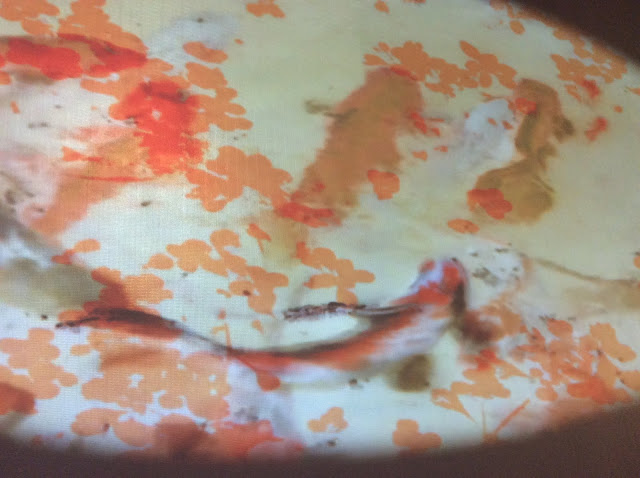 I tried to capture the experience of almost being immersed in the lotus pond via this video.  A part of me wished that I could just stay in my room enjoying the solitude but I had places to go and people to see.  At some point, I had to turn off the projector and step out of the room.  But I knew this tranquility would be waiting for me ... later tonight.
I would make sure that I would hurry back.


I hope you indulge me (and a thousand apologies to the great Basho san for even daring to try)
but I was encouraged to create my own haiku inspired by Fujinami san's lovely Artist Room at the
Park Hotel. . .

My mind drifts, wanders
Through koi noiselessly gliding
Weaving through my dreams.


SaveSave
Posted by Labrador Lady at 12:21 AM No comments: