My Shikoku Henro Tales Part 1 - What does it take to be a Henro?

The immigration officer at Narita Airport looked at my arrival card and asked me why I was going to Tokushima in Shikoku.   And for two weeks at that.
I said I was going to do part of the Shikoku 88 Temple Pilgrimage.  He didn't quite understand and asked me to speak slowly.  So I said that I was going to be a henro and walk with Kobo Daishi.
"Hai, so desu!" he beamed and repeated "Kobo Daishi",  stamped my passport and waved me through.
His question did give me pause -- what was I really doing?  I was on my way to visit Shikoku, the smallest of Japan's four major islands and site of one of the country's most famous and important pilgrimages, the Shikoku 88 Temple Pilgrimage.
While I did not have the time  to complete the entire pilgrimage, a trek of 1,400 kilometres around the entire island, I did plan to visit at least ten of the 88 temples.
Perhaps I could not and should not call myself a henro (pilgrim, in Japanese) then. Was I a semi-henro perhaps?  I knew I was not a pseudo-henro since there was nothing false about my feelings or intentions.
Doing a portion of the 88 Temple Pilgrimage had always been a long held dream, now it was about
to be fulfilled. 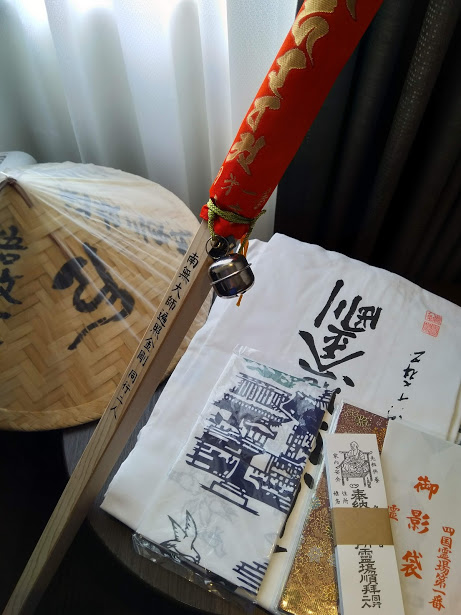 I came to Shikoku armed with my walking plan, a detailed itinerary, confirmed bookings for our accommodations but there were a few things that I could only do once I arrived in the city of Tokushima in Tokushima prefecture where we would spend the first half of our stay in the island.
If I was going to be a henro -- I would have to look and act like one. To do this, I had to visit a
store specialising in the requisite items that I needed for the pilgrimage.
A henro is normally decked out in pilgrim's attire.  This includes but is not limited to the wide brimmed hat called the sugegasa which also has the sanskrit symbol for Kobo Daishi
written in front.
A pilgrim  wears a white jacket called a hakui and carries a wooden staff called the kongozue which they say is the symbol of Kobo Daishi who walks with all pilgrims.
One also carries a nokyocho, a book  stamped with the seal of the temples that one visits, plus
osame-fuda slips which serve as name cards.
These are the essential items of the henro's kit -- I bought all these at Ryozenji  which is Temple 1.
The kind lady spoke some english so when I mentioned that I was embarrassed that I was only doing a small portion of the pilgrimage, she assured me that it was perfectly all right -- this was to be my pilgrimage and there were no rules to follow.
Kobo Daishi is very understanding, she smilingly said. 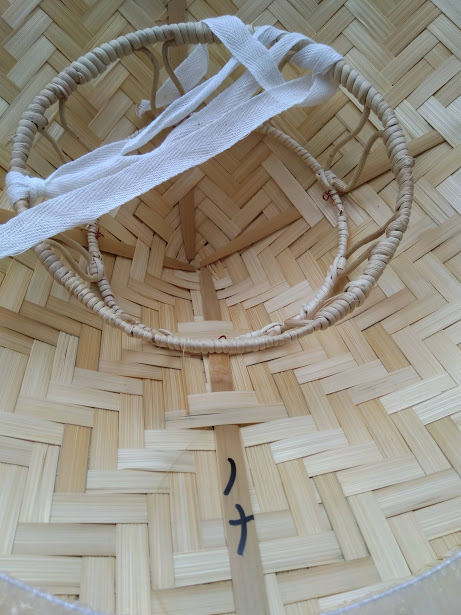 The lady asked me to write my name inside my hat -- and was surprised and pleased when I wrote my name in katakana. 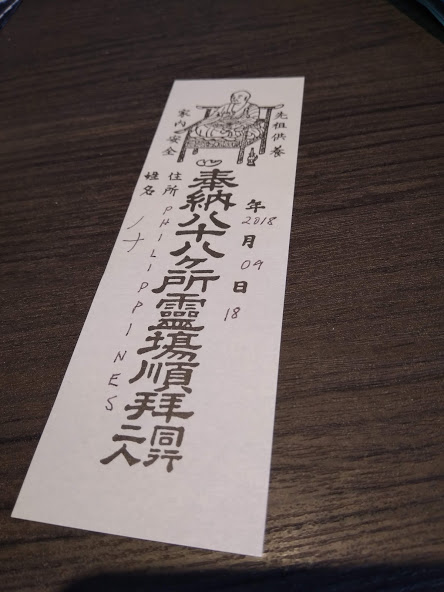 This is my filled up osame-fuda slip.  They come in various colors signifying how many times one has done the pilgrimage.  White is for those who are walking it for the first up to the fourth time.  On one side you write your name and address and on the other side, you put the date of your visit.
Now I am all set to start my very own journey as a henro.

Posted by Labrador Lady at 4:18 AM No comments: