I learned the hard way -- two things that won't work together:  a first time visit to Banaue and the Imabayah Festival.  One has to give way to the other ... unless you have more than a weekend to spare. 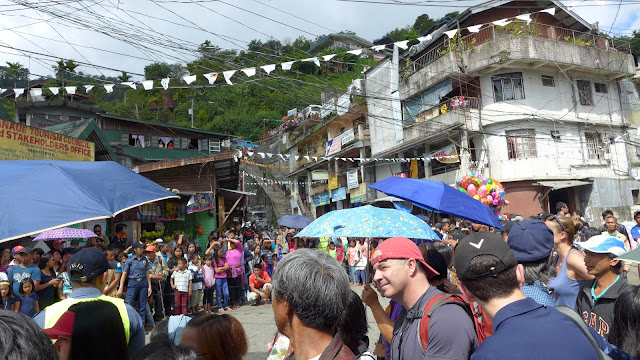 Imbayah -- Ifugao Province's biggest and grandest festival is held annually and this year, it happened from April 26 to 29.  Imbayah was ostensibly our main reason for visiting Banaue but it did not
quite work out as planned.
However, we made it just in time to catch the starting ceremonies held at the town plaza. 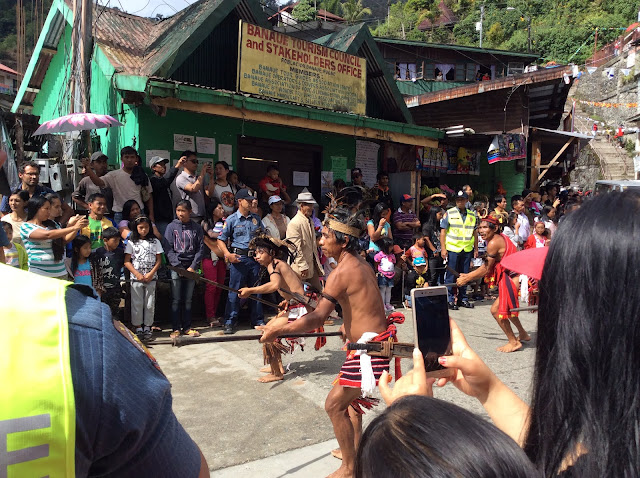 I  squeezed myself to the front of the crowd, massed three deep on each side and thus had a good view of the parade as it passed by. 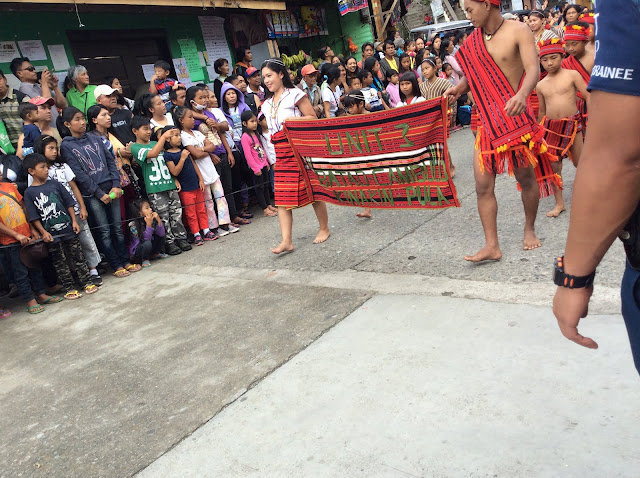 Participants came from the different barangays  in Ifugao province.  Grouped into clusters, they each showed off the richness of the Ifugao culture and heritage. 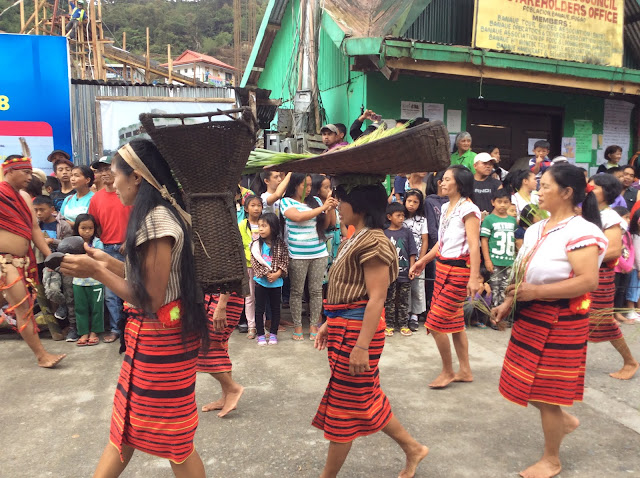 These ladies showed off the traditional produce from their farms -- aside from the rice stalks that one is holding, I saw onions or leeks in the basket perched atop the lady's head.  She carried the basket with such grace and panache -- and would have put any beauty pageant contestant to shame. 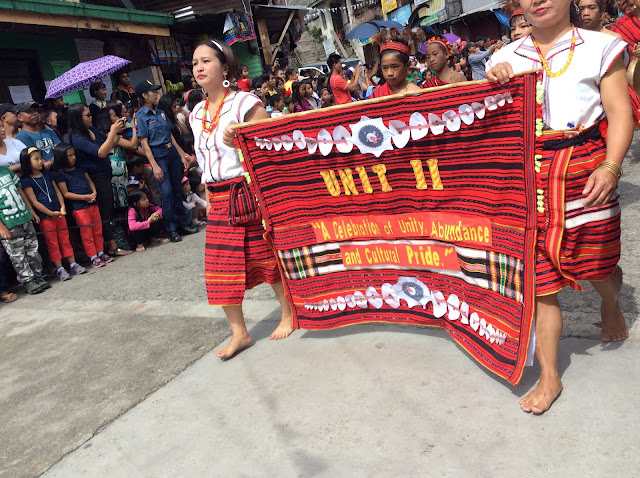 I did not know it before but the handwoven cloth that the Ifugao wear show their status in the tribe.
The red cloth with black stripes that you see on the left is  worn by ordinary folk while the cloth with the white stripes on the right signifies that the wearer belongs to a higher, wealthier class. 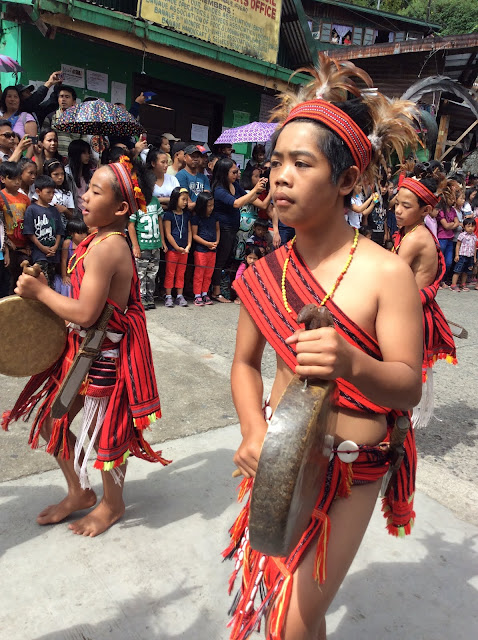 It was heartening to see young people participate in the festival, a sign that their culture is alive and well and will continue on to the next generations. 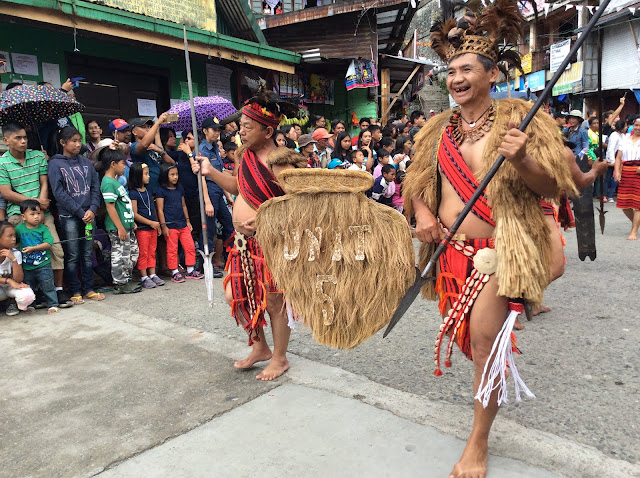 Imbayah is a happy occasion,  where everyone comes together and puts aside differences to celebrate and show off their kinship and solidarity. 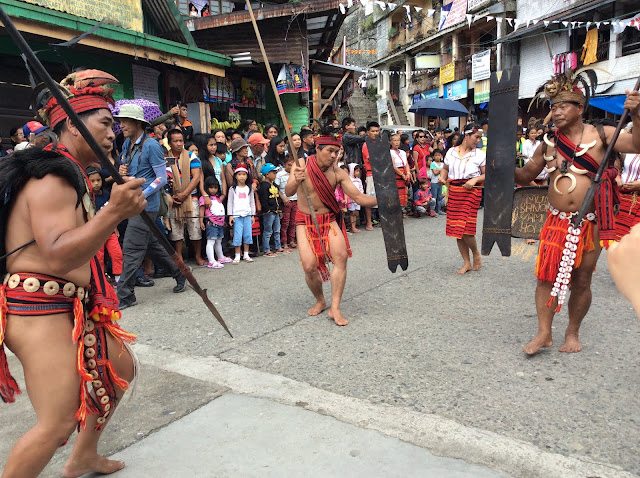 It was entertaining to watch the different tribal dances, the staged "fights" and battles.  People whooped and hollered with every imaginary thrust and feint.  What great fun! 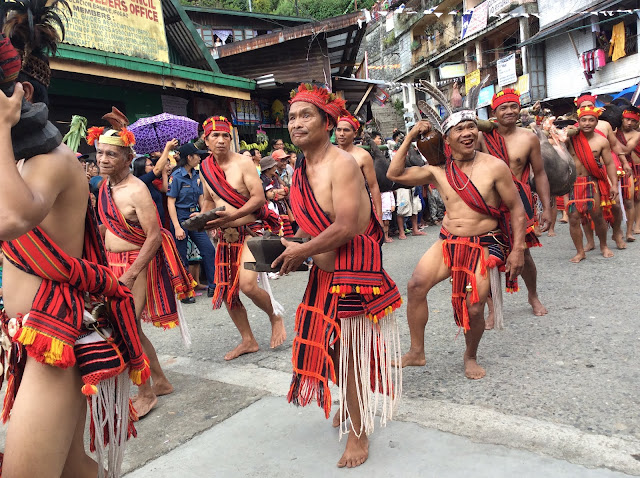 This last group carried a poor hog, slung on bamboo poles.  I knew it was about to be slaughtered right there,  for the traditional canao where animals are killed and roasted as a sacrificial offering. Canaos are typically held during festivals, weddings and funerals.
I did not want to witness this gruesome (to my mind) tradition so I quickly walked through the crowds -- however, I was not able to escape the piercing albeit short dying squeals of that poor pig. 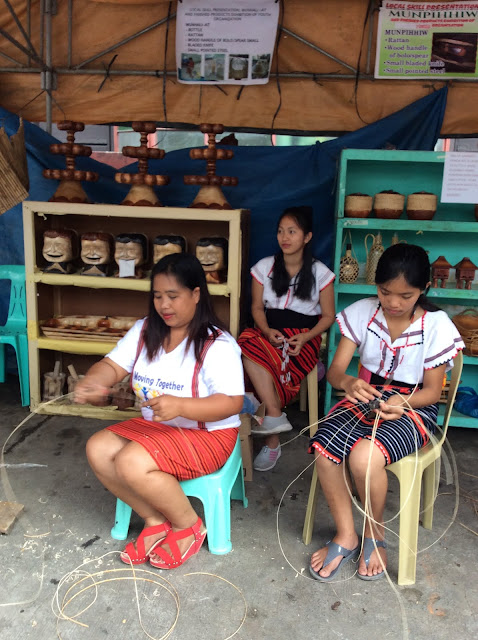 I made my way through the crowd to the other end of the plaza where there were booths showing off the traditional art and crafts.   These young ladies were busy hard at work weaving materials needed for basket making. 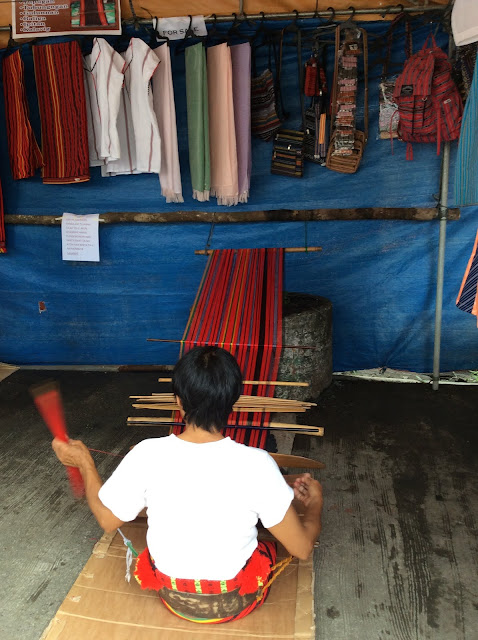 The gorgeous vibrant woven cloth traditionally worn by everyone is worked on this simple loom.
I could not resist and ended up buying a native blouse, you can see it hanging on the rack above. 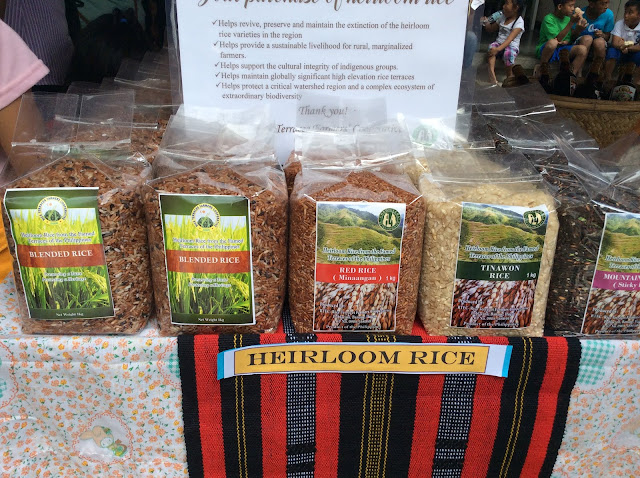 The lady at the booth said that there are now efforts to continue to cultivate and plant the heirloom rice of the terraces.  These come in several varieties -- red or brown rice,  black rice and the tinawon rice with round, small grains. 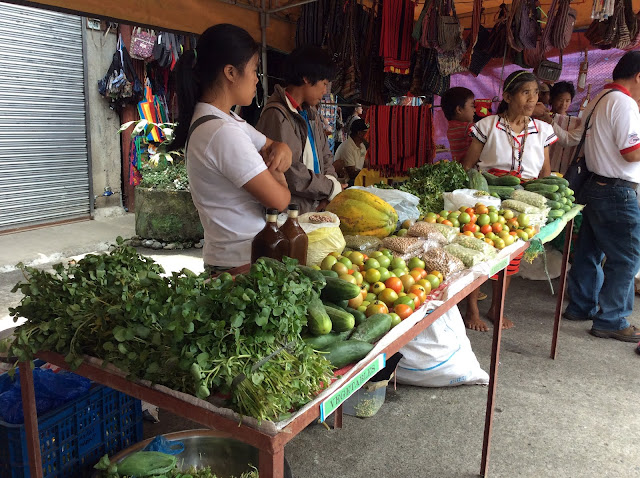 Rice is not the only crop grown in the mountains.  The farmers also brought their locally grown fruits and vegetables and even bottles of wild honey. 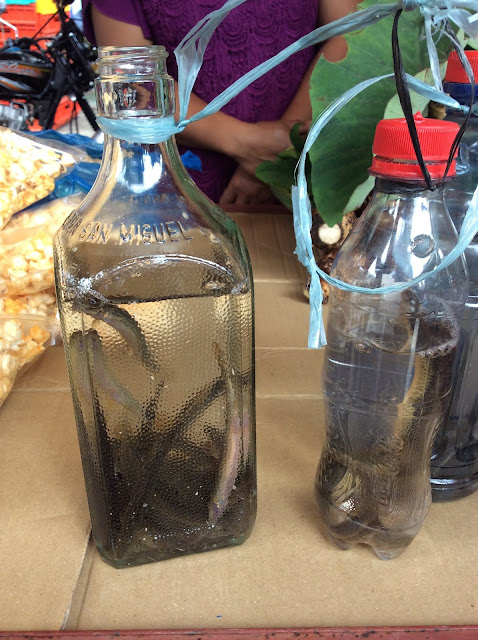 These small fish are found in the terraces and I was told they are considered as a tasty, local delicacy.
These are called "japanese fish" because they were introduced to the terraces by a Japanese scientist.  They reminded me of "talimusak", a particular favorite of my father.  I suppose these would also be delicious cooked in vinegar as "paksiw". 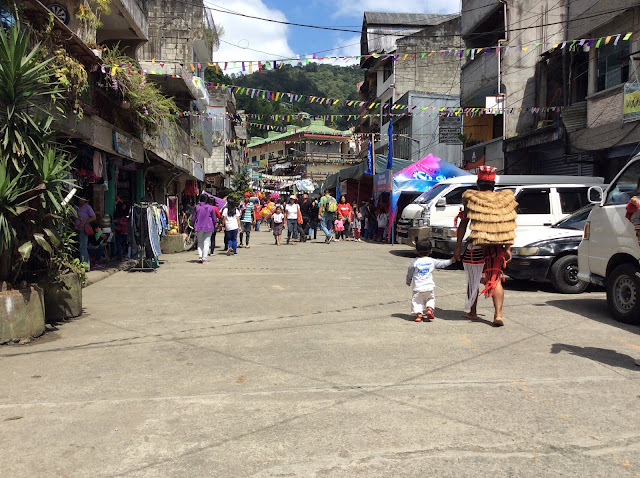 The sounds of the canao had died down so it was time to walk back to the center and catch what was left of the opening ceremonies.
I quietly followed behind this young Igorot father and his son -- I have high hopes that in a few years, the little boy too would be alongside his father, dressed in Ifugao finery, revelling in the proud legacy and heritage of these mountain provinces.
SaveSave
Posted by Labrador Lady at 8:04 PM No comments: