Of a Jesuit church, Frescoes, A Miraculous Well and an Earthquake Survivor -- the Our Lady of Assumption Church in Dauis, Bohol

The massive earthquake that happened in Bohol last October 2013 damaged so many beautiful churches -- most of them are beyond repair.  When I saw these magnificent structures reduced to rubble,  it broke my heart.  I regretted that I had not been to Bohol earlier -- so that I could have seen these centuries old churches while they were still intact. 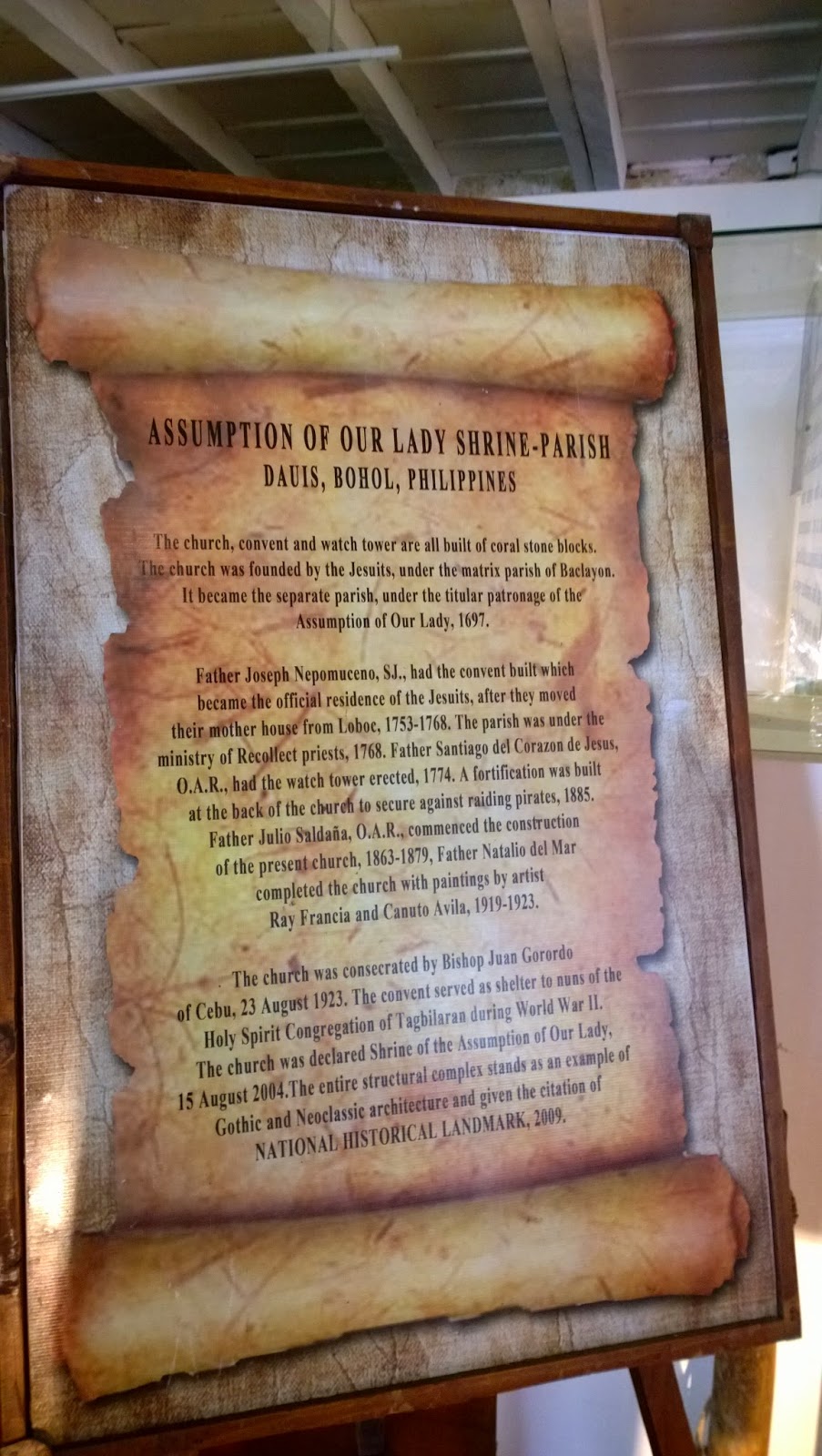 Some of the churches, those farther away from the epicentre and those built perhaps on more solid ground or of sturdier construction avoided complete destruction.
One of these churches is the Assumption of Our Lady Shrine in Dauis in Panglao Island.  Originally established by the Jesuits in the 1700s, it was passed on to the Augustinians when the Jesuits were expelled from the country.
On this last trip to Bohol for work, I purposely stopped off to see the church on my way to the airport. 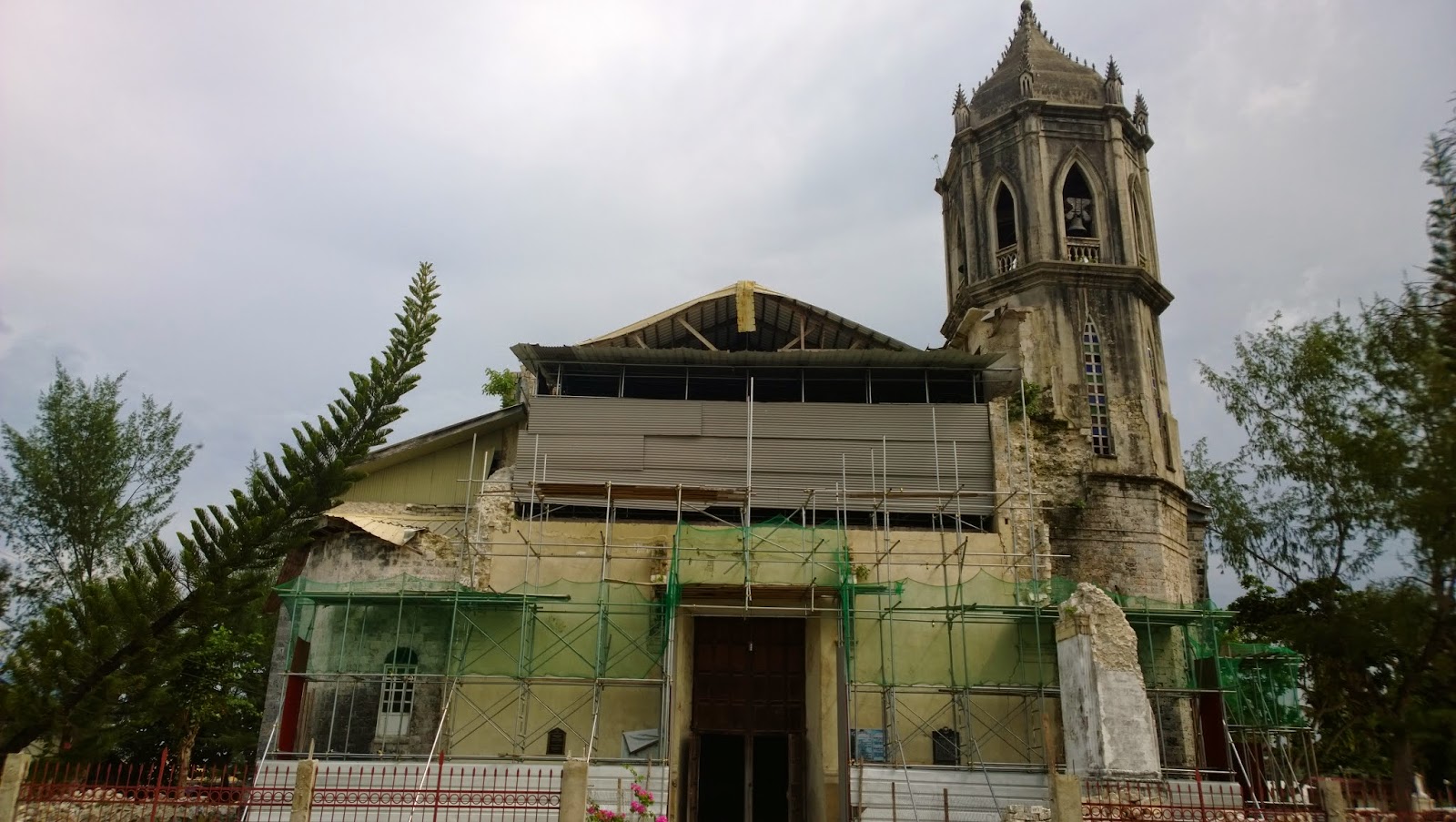 The portico that used to be a significant feature of the church facade had been completely felled by the earthquake and portions of the tall bell tower rising high above the church had also been destroyed.  Despite these, I felt that the Dauis church still fared much better than the church in Loboc where it seems that repair and reconstruction are more daunting, near impossible
tasks. 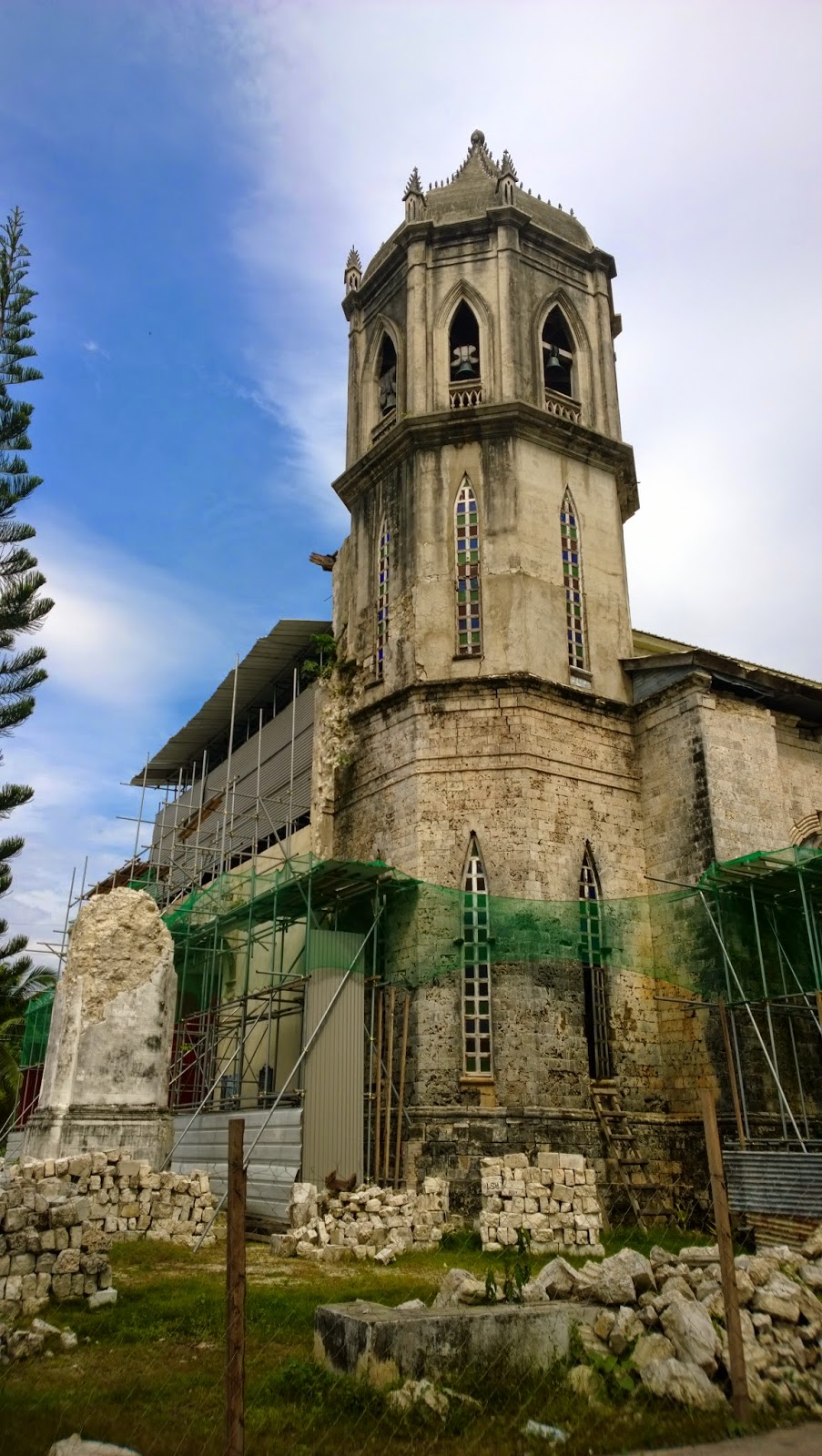 You can see that reconstruction has started on the gothic inspired bell tower. Cream coloured limestone bricks will replace those that were damaged, keeping the overall look of the structure. 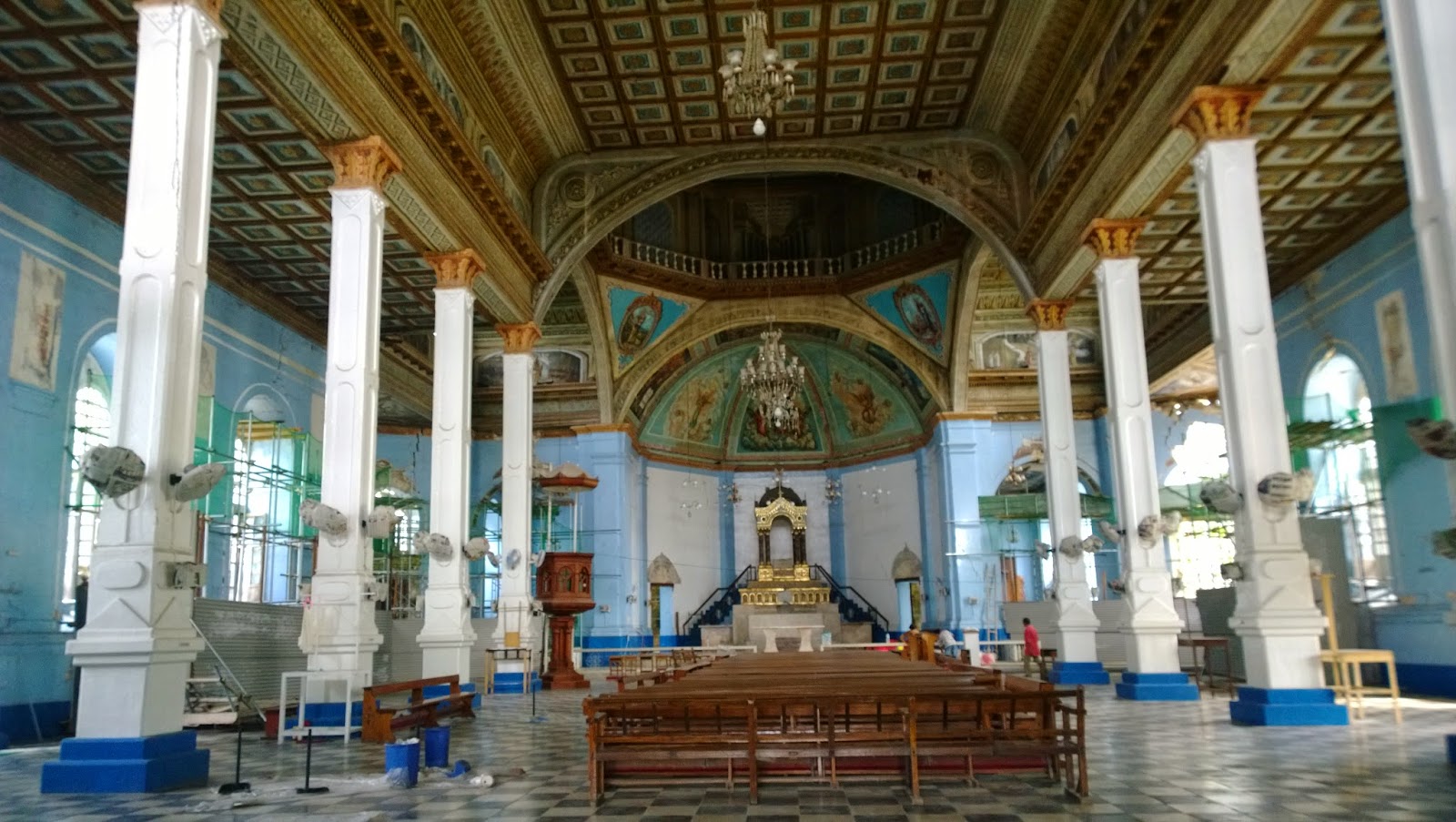 The church interior is graceful and quietly elegant.  It seemed to me that it suffered  less damage than the exterior.  Sunlight streamed in from the windows and the tall white columns and posts add to the spacious and uncluttered feel.
The statues have been removed for protection as the church undergoes repair.
Masses are not held inside the church but outdoors, as precaution from whatever danger could arise from the weakened structure. 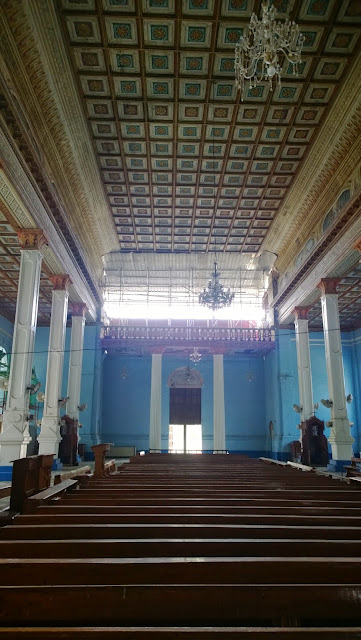 This is a view of the interior taken from the altar.  The massive posts you see in front, flanking the entrance are there to hold up and support the portico, now completely destroyed.
A gaping hole in the ceiling shows where the top of the portico would have been. 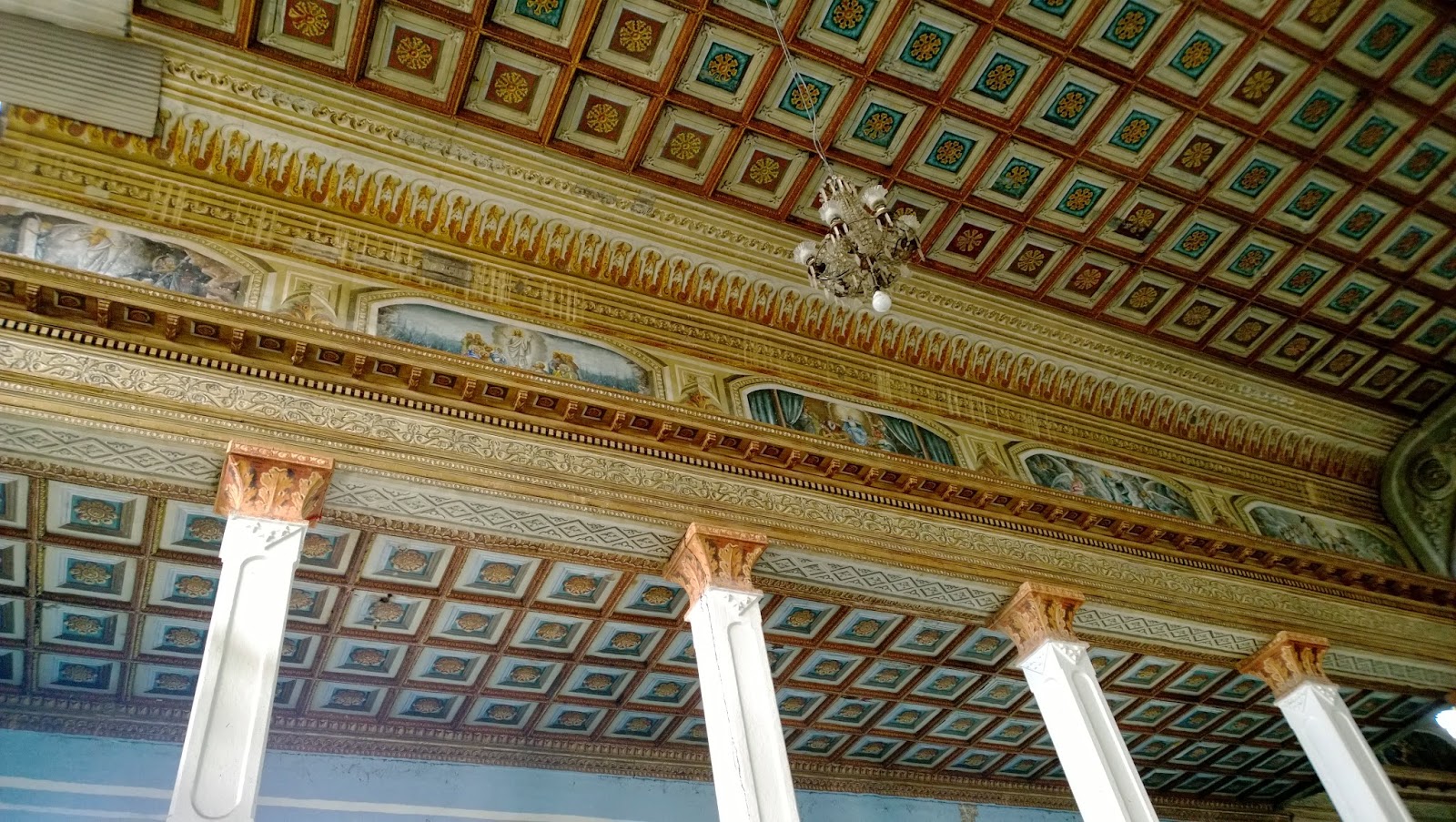 The ceiling all along the central nave and aisles shows not frescoes but woodwork.
Each square frames ornamental non liturgical symbols, in gold and a vivid turquoise blue. 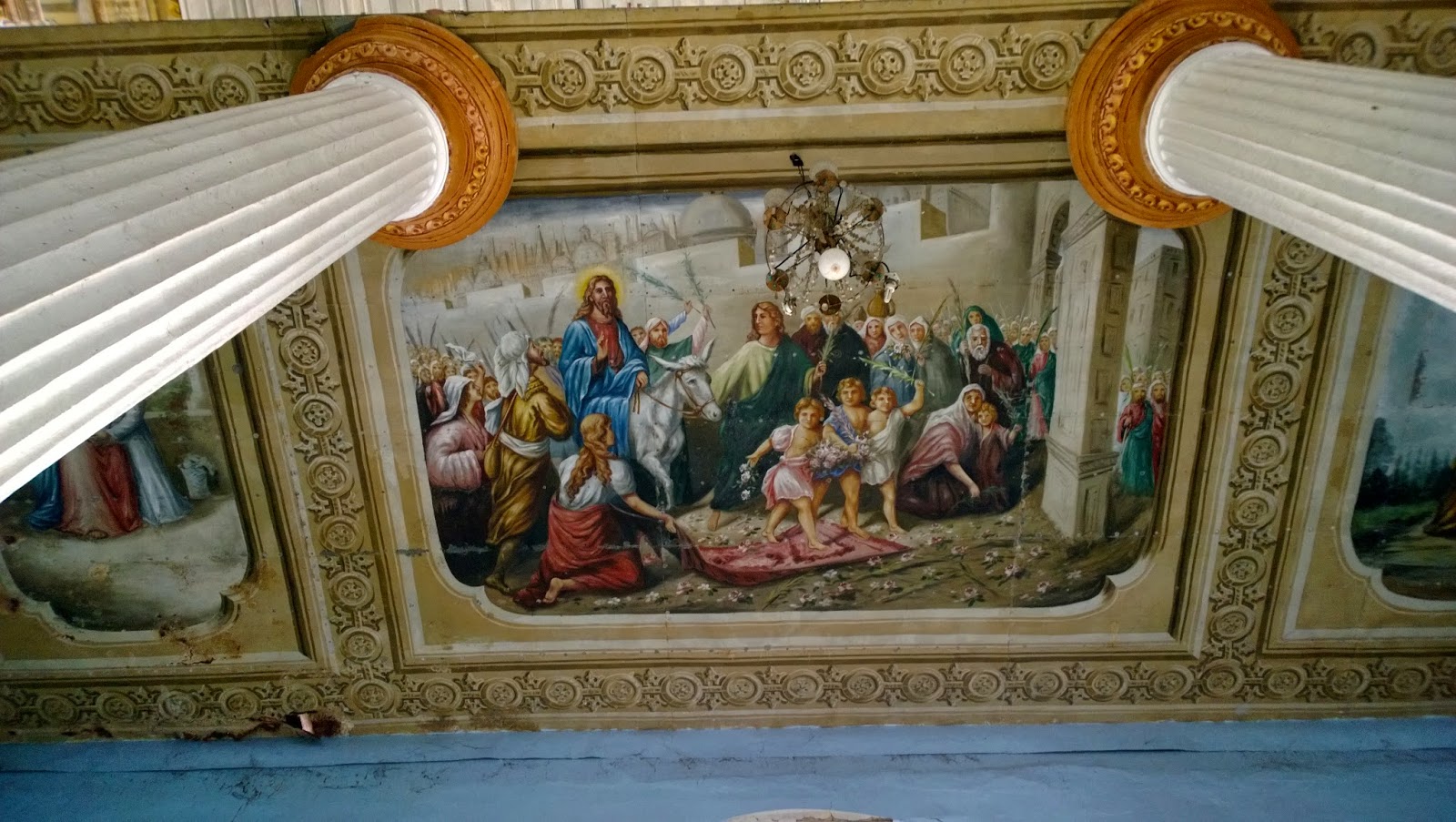 The religious scenes such as this one showing Christ's triumphant entry into Jerusalem, are painted along the sides of the ceiling.  These marvellous frescoes were done in the early 1920s by Ray Francia, a famous Boholano painter. 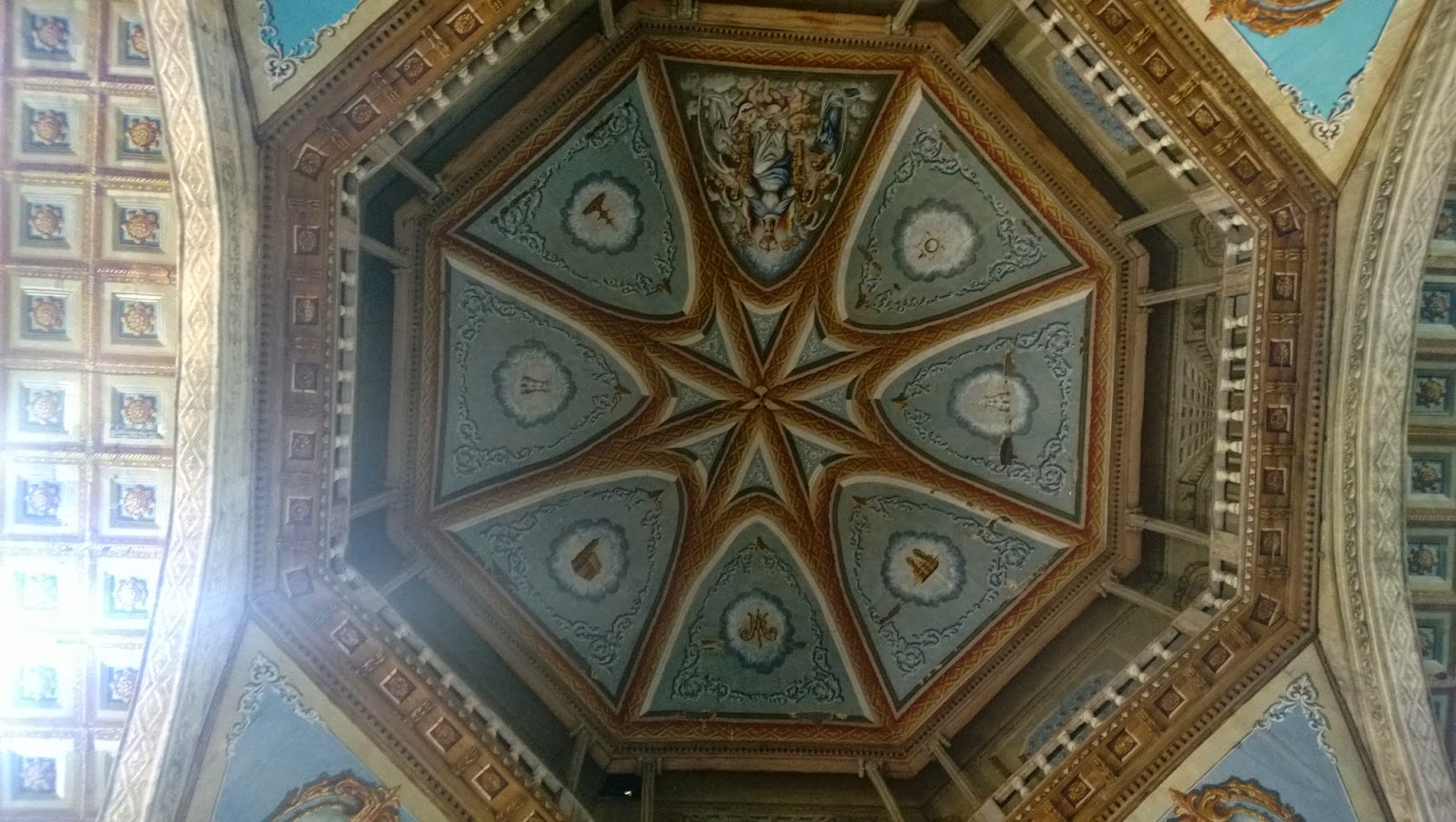 The work of this outstanding artist continues throughout the ceiling of the church.  Right under the dome is this fresco showing the Assumption of Our Lady. 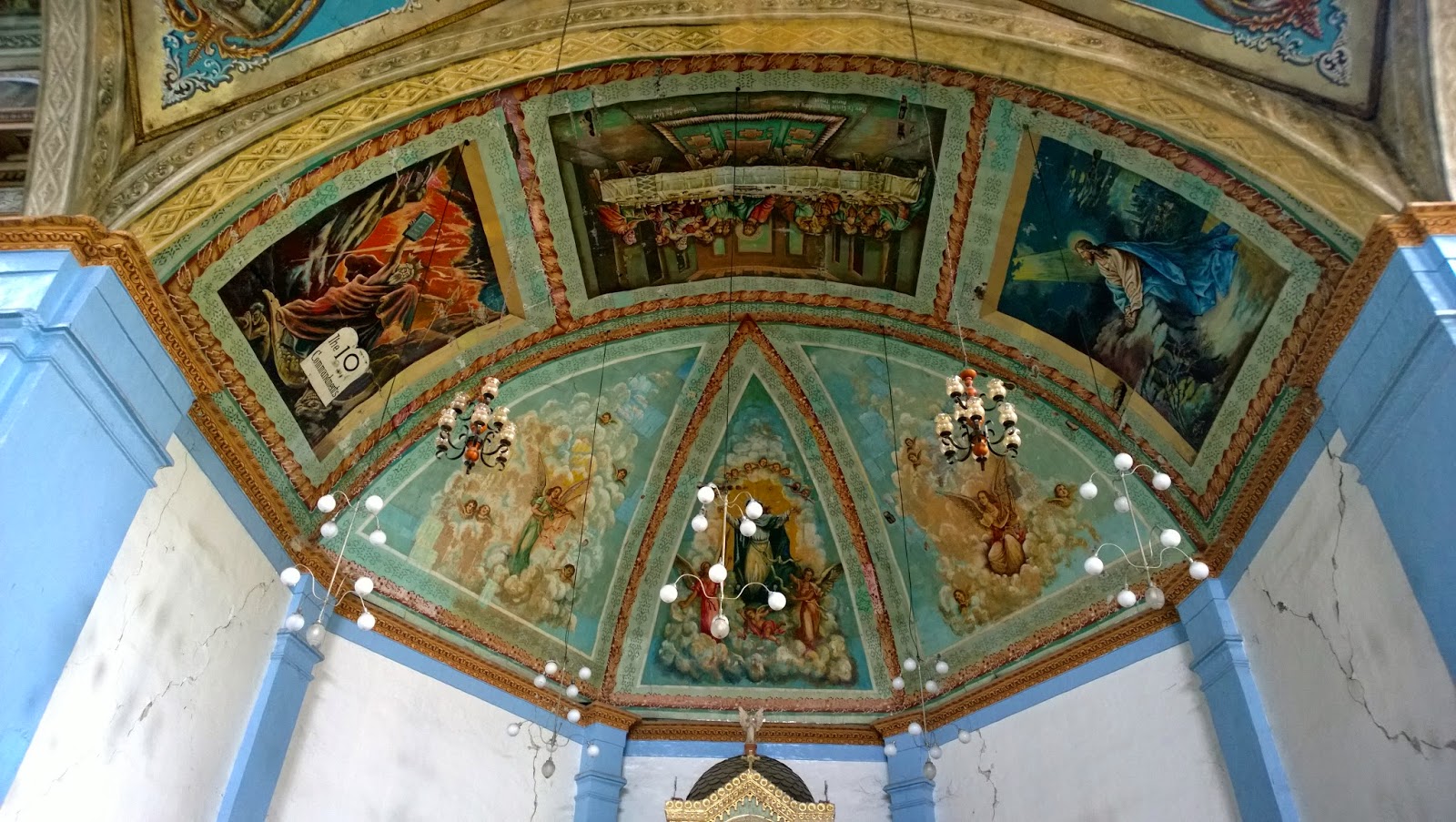 On top of the altar are more frescoes depicting various scenes like the Last Supper and the Agony in the Garden.  These are all beautifully painted and would not look out of place in the grandest of churches anywhere in the world. 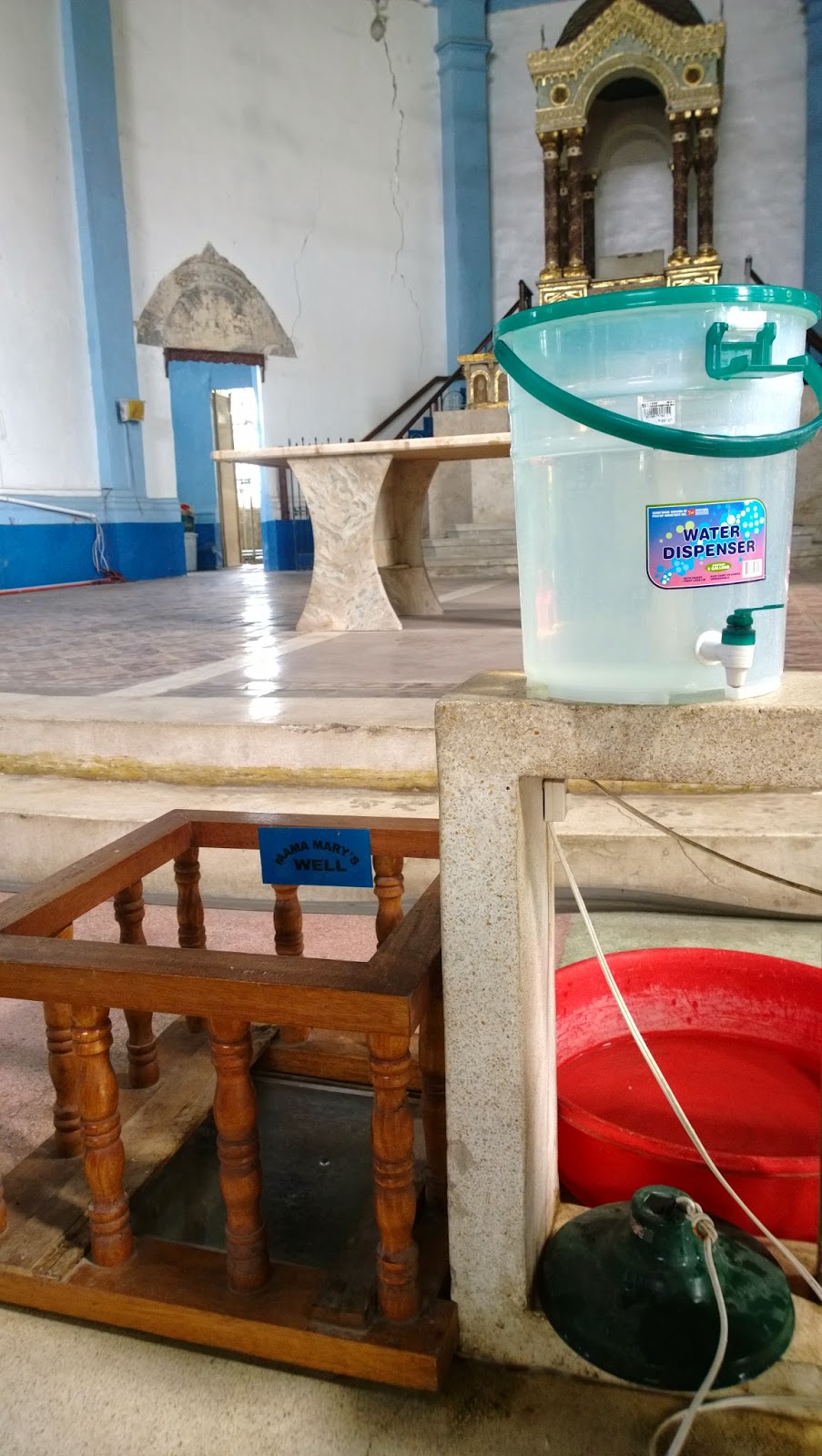 Aside from its striking and impressive appearance, Dauis church is more popular because of the presence of miraculous waters right inside the church, coming from a deep well located just in front of the main altar.
According to local lore, centuries ago, the town was attacked by pirates.  To keep themselves safe, the townspeople locked themselves inside the church as the pirates ransacked the town.  After a while they ran out of food and water.  A well miraculously appeared inside the church and they were able to sustain themselves until it was safe to come out.
To this day, fresh water continues to spring from the well and is available to anyone -- just bring your plastic containers and fill them up.  People have faith that the waters have healing powers. 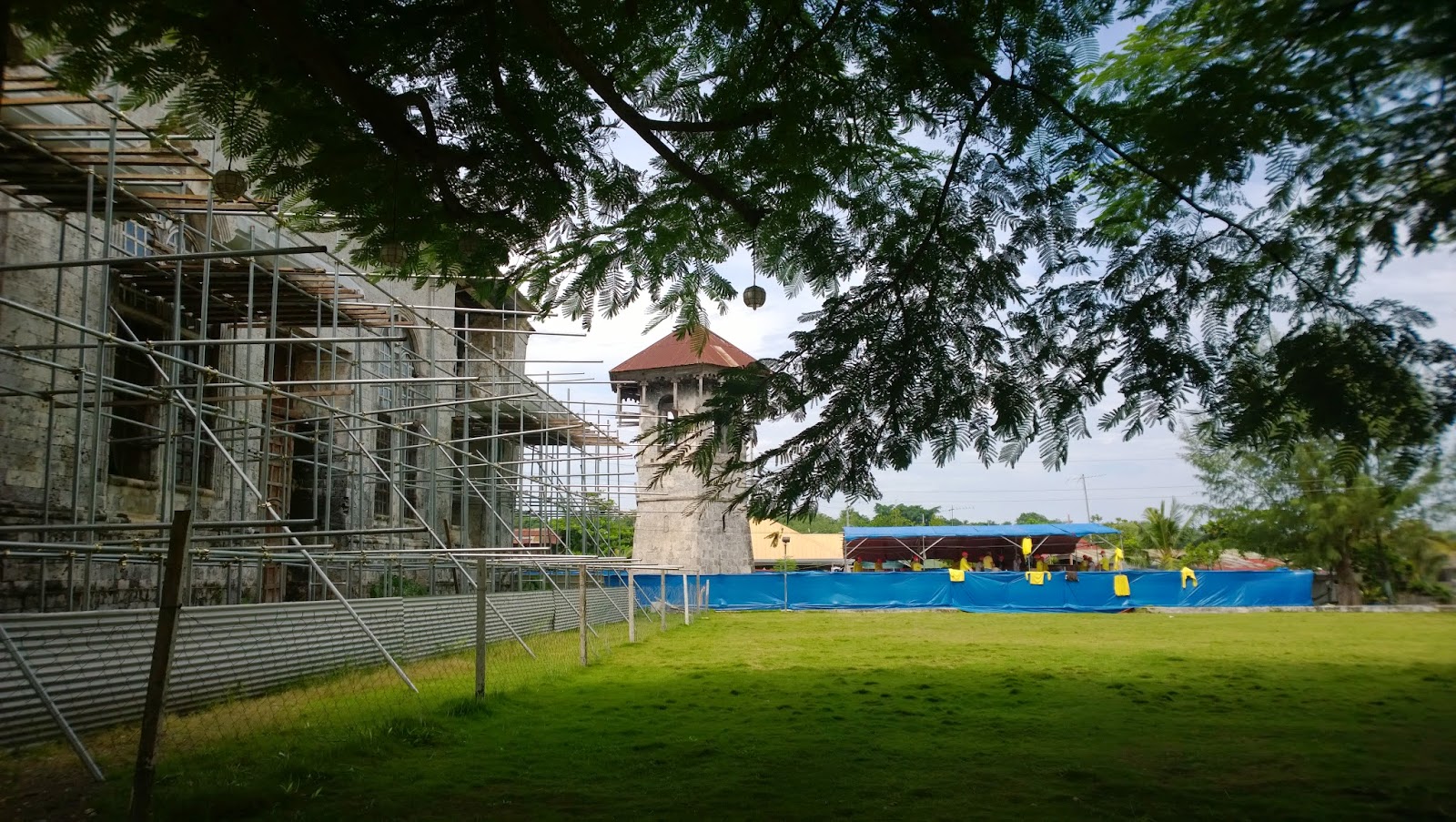 The back of the church has also sustained damage and reconstruction is ongoing.  A squat hexagonal watch tower, dating back to 1774  sits on one side.  In Spanish times, this was used to watch out for Moorish invaders who came by sea.

This is a panoramic shot of the back of the church.  On the left side is the very impressive and large convento -- also made of bricks and limestone.  It is built along the lines of the tradition Philippine bahay na bato.

This is the view that looks out over the sea.  Right now, it is tranquil and calm but I can imagine that centuries ago, when Moors and pirates were a constant threat, being on the edge of open water such as this must have been a constant concern for Dauis and its inhabitants. 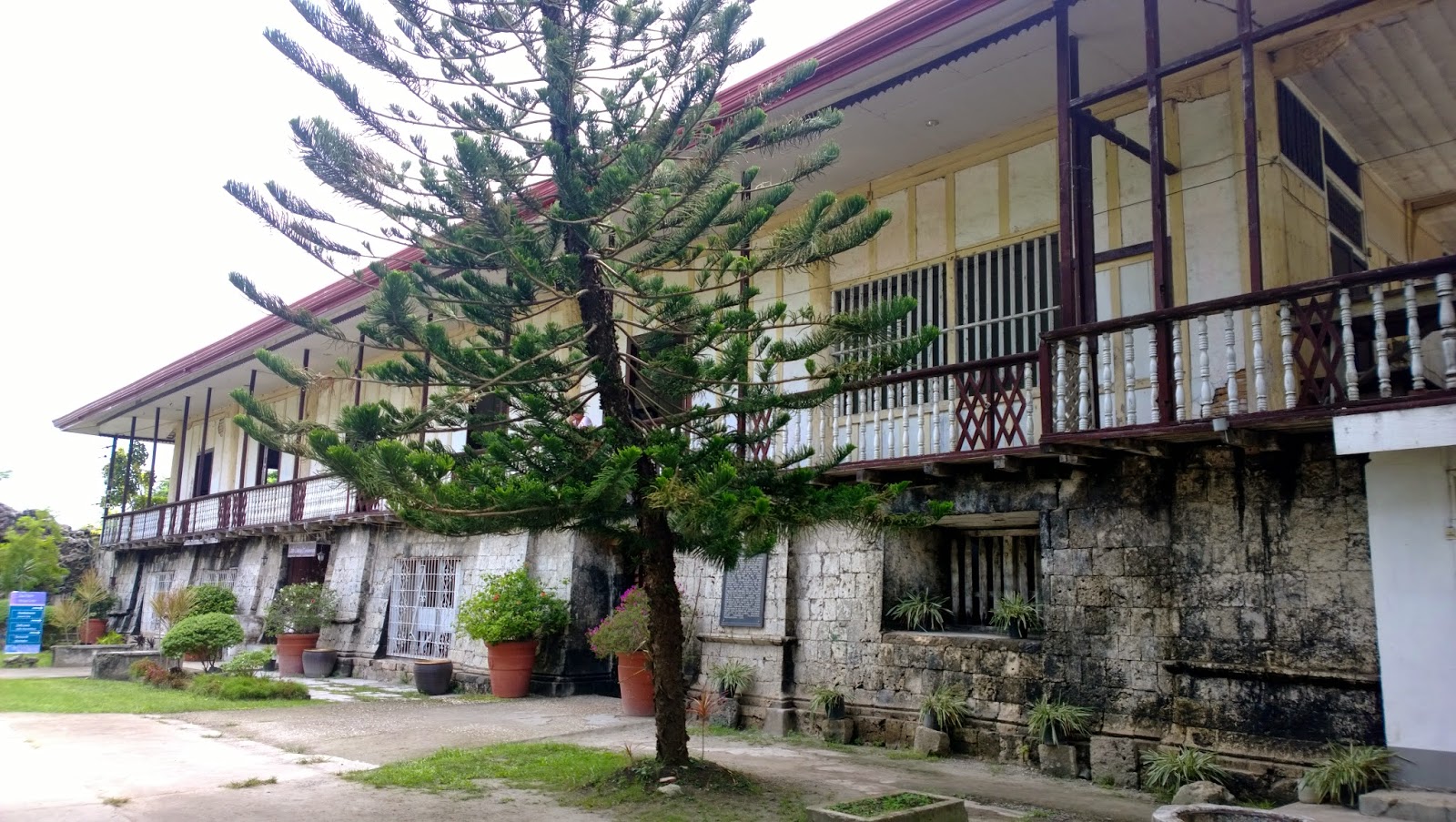 The convento is massive and imposing.  Because it is so wide and squat, it seems to have been spared from the destruction wrought by the earthquake.   I had spent quite a bit of time walking in and around the complex and I felt that I should be on my way to the airport.  But something made me step inside the convento. 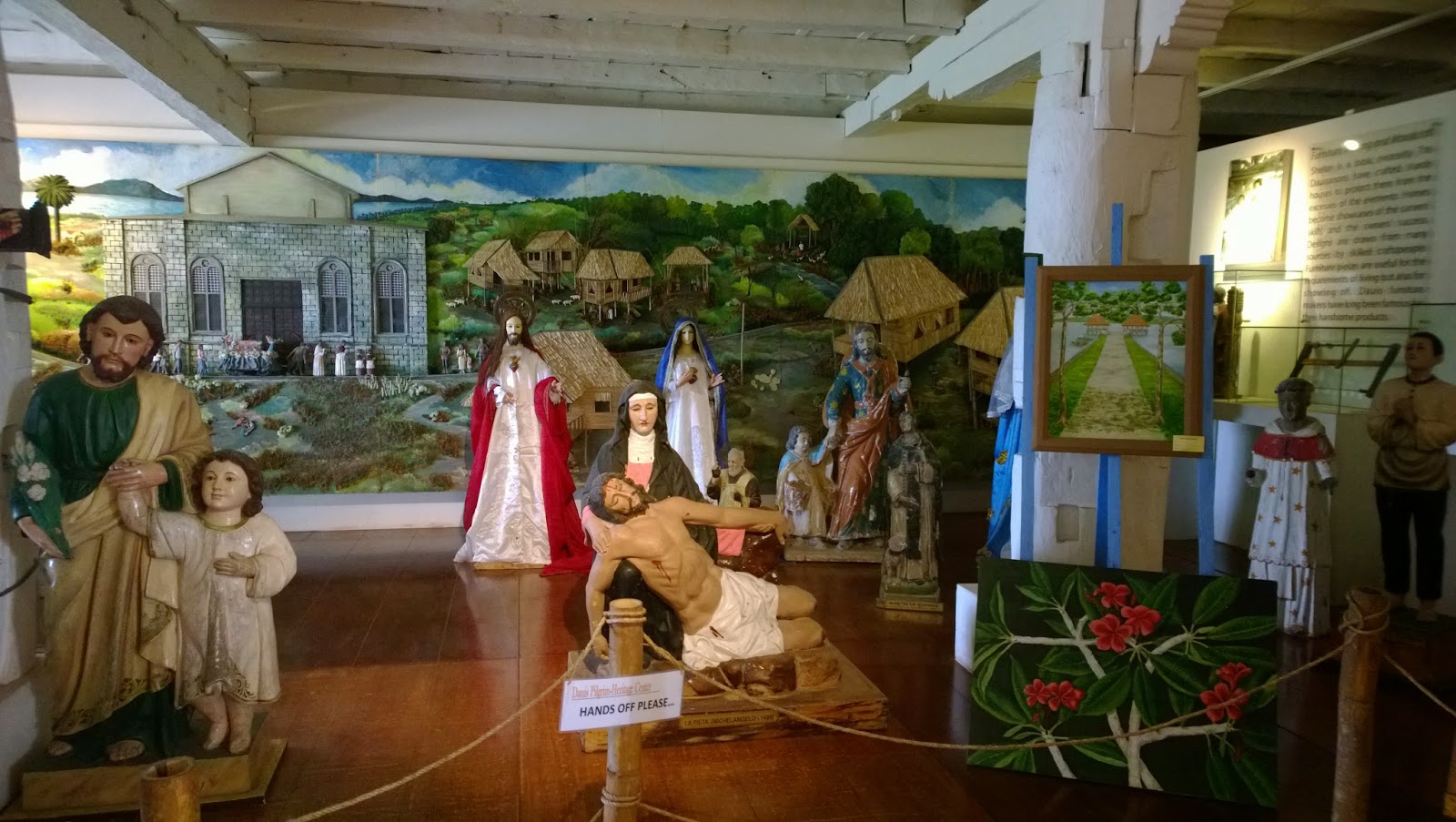 The ground floor houses a small coffee shop and a gift shop selling church and Boholano souvenirs and crafts.  Part of the space is now occupied by these statues, rescued from the church.  Some have lost fingers and limbs and will have to be restored. 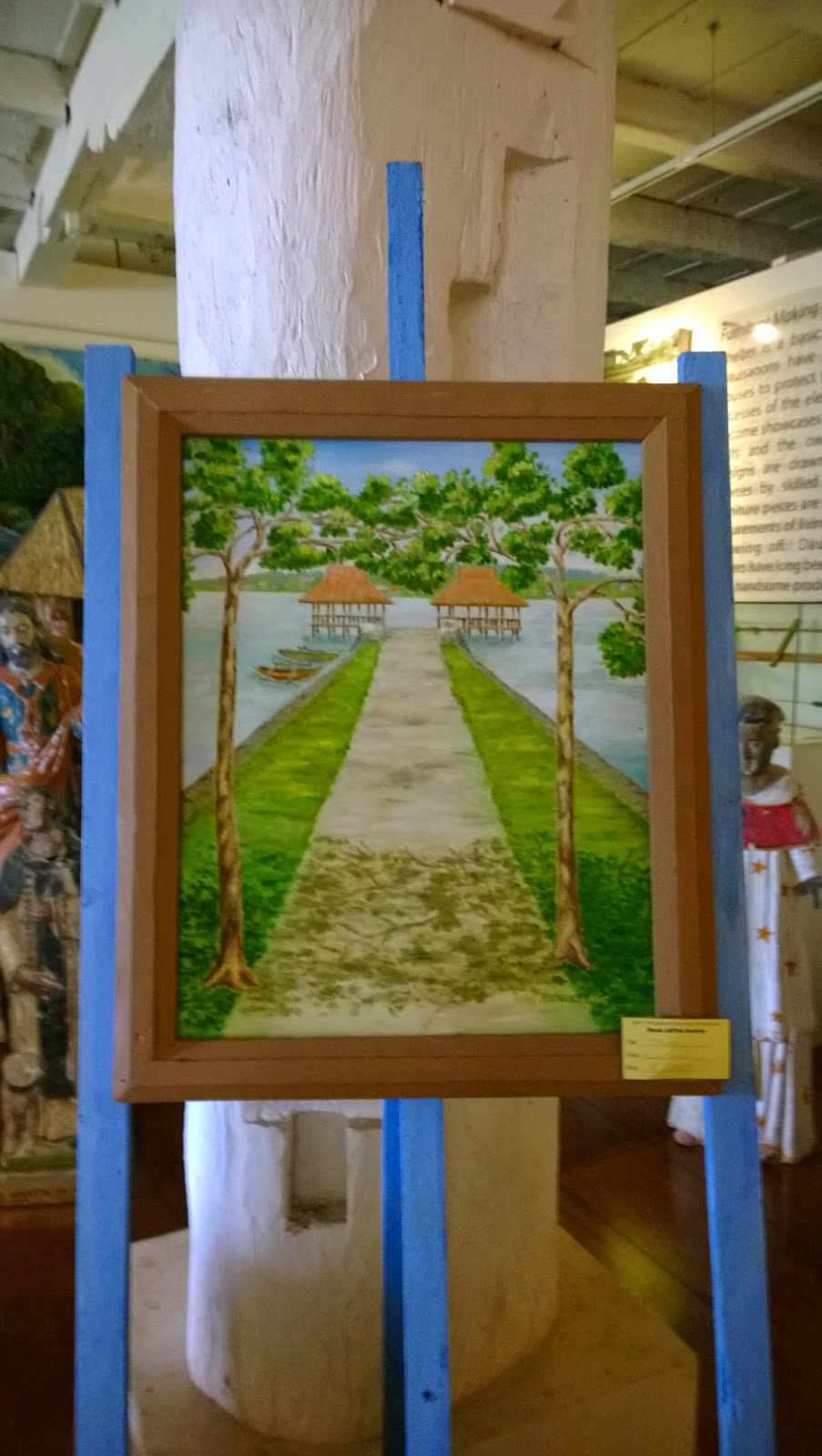 There is a charming painting showing the walkway from the church to the boat shed at the end of the small pier.  I can imagine the people of Bohol, coming to church via banca, tying up their boats at water's edge and attending church services. 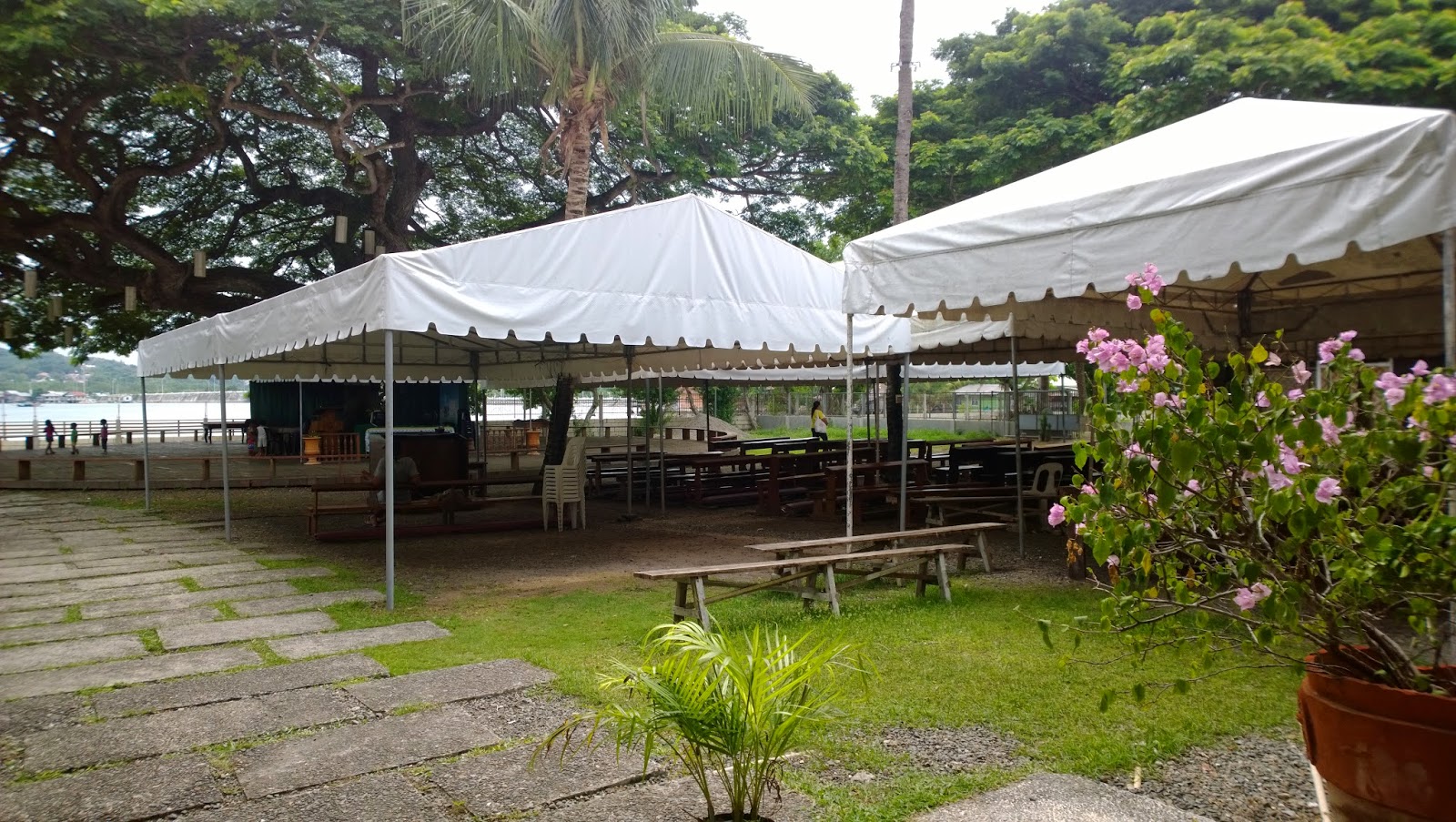 Behind the convento is the open air area where pews have been set up and masses and church services are now held.  It overlooks the sea and is ringed with large old trees -- acacia and narra perhaps.  I can imagine that it is conducive to prayer and meditation. 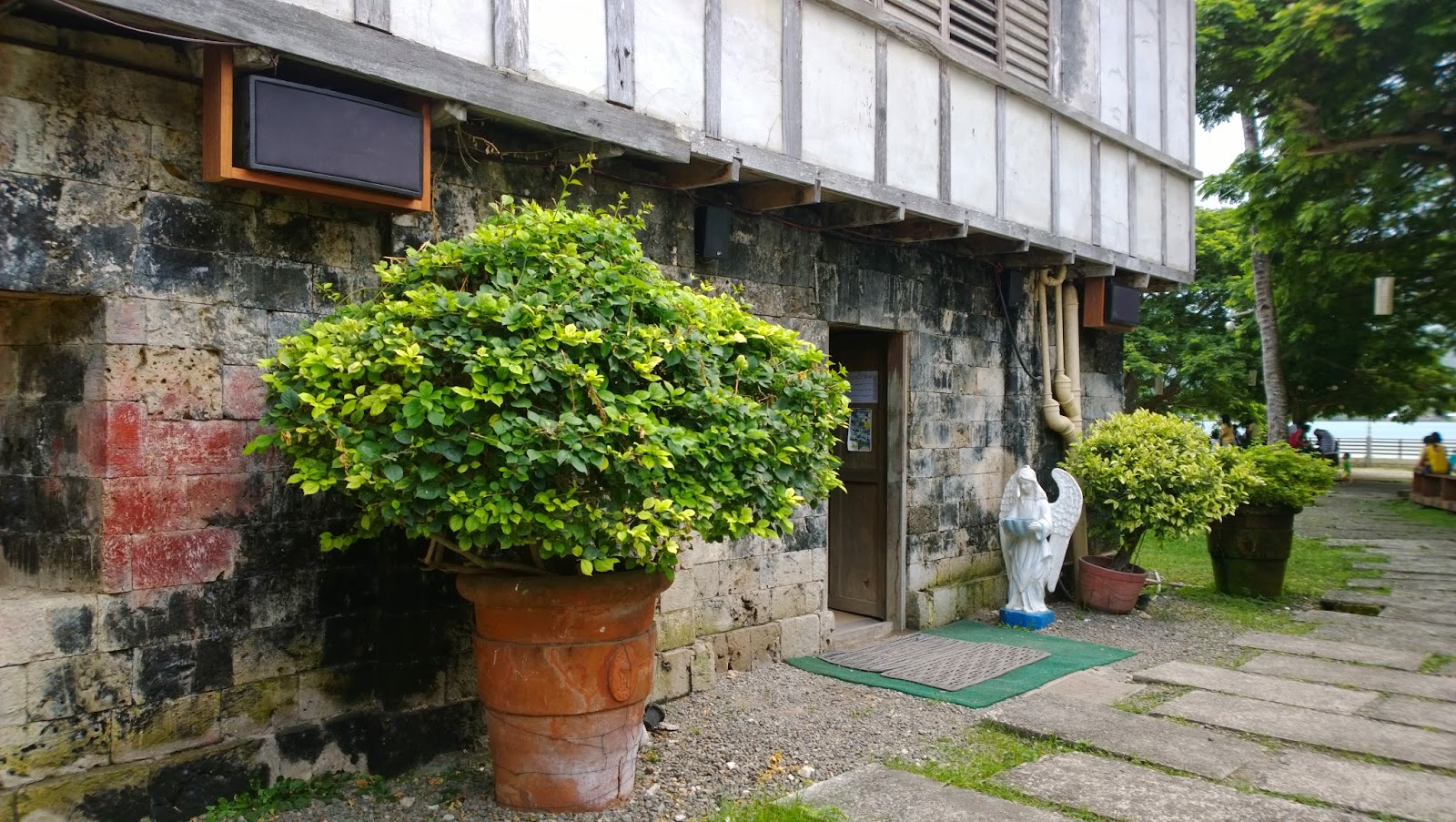 The lady at the gift shop asked me if I wanted to pay a visit to Our Lady of the Assumption. She pointed me to the back of the convento and told me to enter where an angel stood guard at the door. 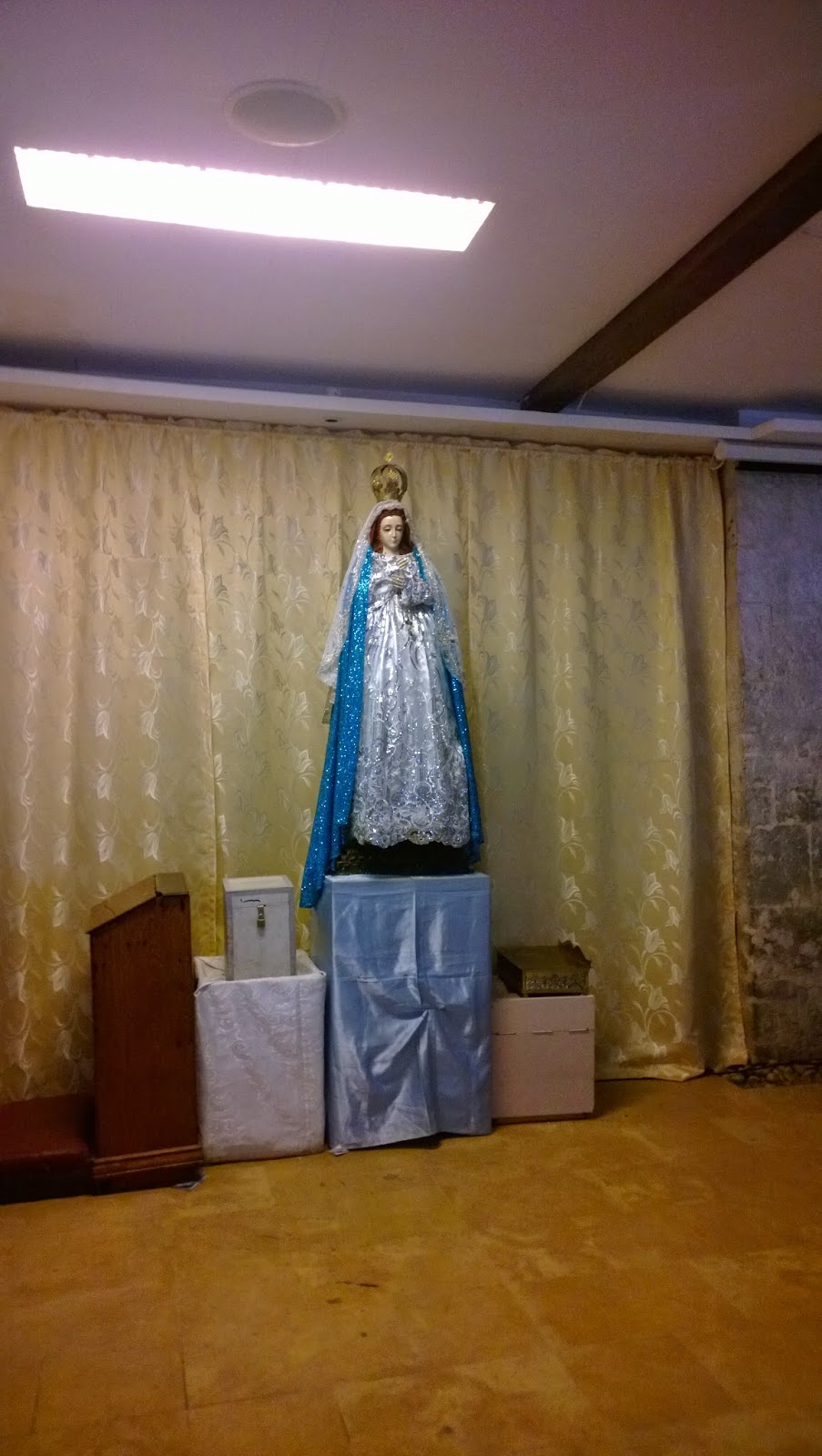 The room had been transformed into a small makeshift chapel.  Our Lady of the Assumption, also proclaimed as miraculous by the people of Bohol who have worshipped her for centuries, stood serenely on an improvised altar covered with blue cloth.
It is far cry from her majestic, gold crowned perch on the main altar.
As I stood before her,  I could feel her strong, loving and protective spirit, lessened not one bit by the simple and humble surroundings she is in.
Now I understood why I was drawn into the convento -- it was Our Lady calling me to visit and
spend some moments with her.

Posted by Labrador Lady at 1:07 AM No comments:

We had been eating so much ramen lately that I thought I'd see what would happen if I added a Pinoy twist to this Japanese staple.  And you know what they say about idle minds ... 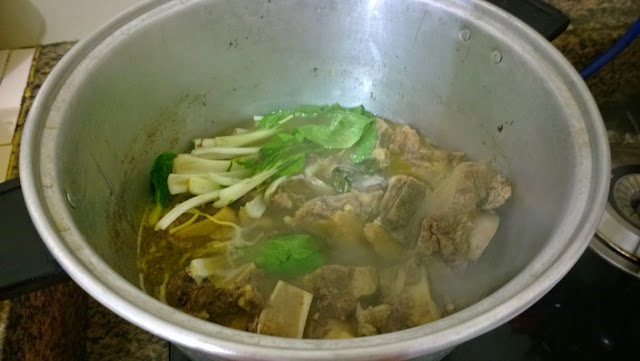 My first experiment with Filipinizing ramen was with a pot of bulalo, remnants of meat and marrow from a rainy Sunday lunch.  The idea of recycling it into bulalo ramen for dinner was my lazy way of coping with left overs. 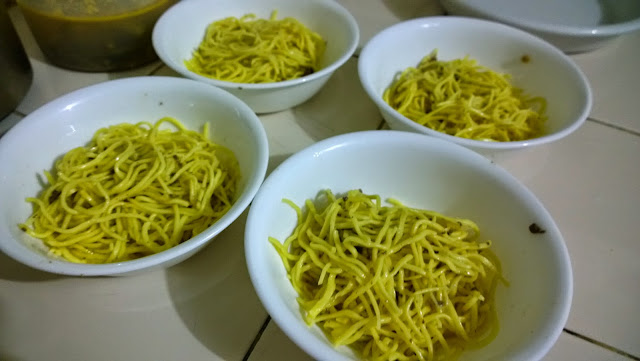 I always keeps packs of fresh egg noodles in the vegetable bin.  These are pre cooked noodles so no need to cook but I do blanch them twice in boiling water just to remove any alkaline smell and taste. 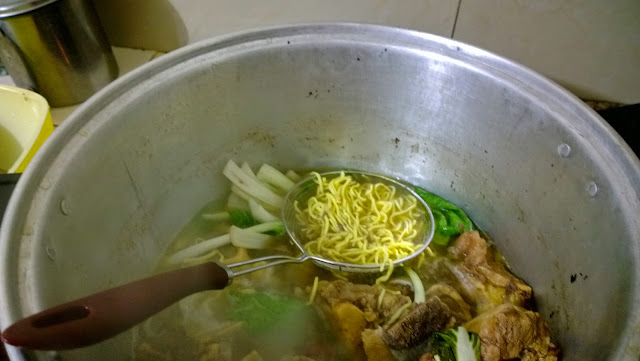 I placed a serving of noodles and dipped them in the simmering bulalo broth so that they could absorb more of the beef flavour. 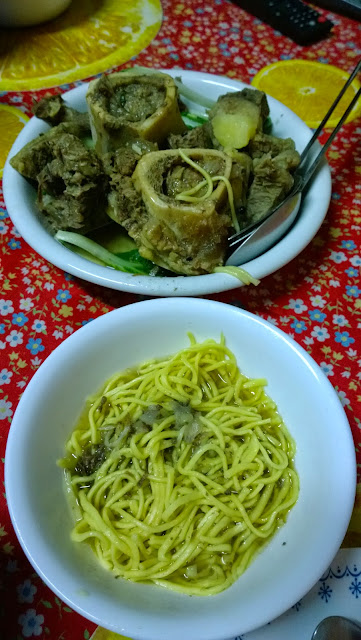 The shin bones, I served on the side.  Marrow on hot soup and noodles may not seem like ramen at all but it was still a delicious one dish dinner! 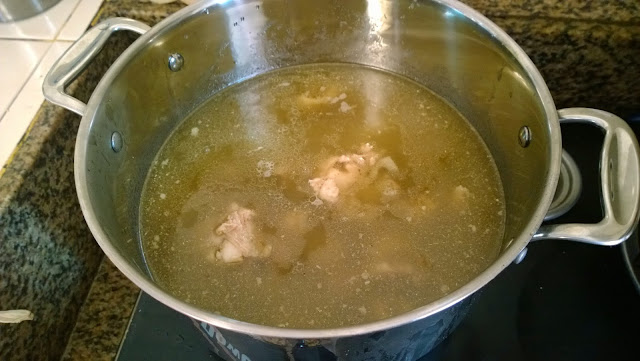 My next experiment involved lechon kawali which I thought would be the Filipino version of chashu. Instead of using recycled broth, this time I made my "ramen" broth from scratch -- using pork bones, dried kelp and niboshi -- ingredients commonly used in the basic ramen base. 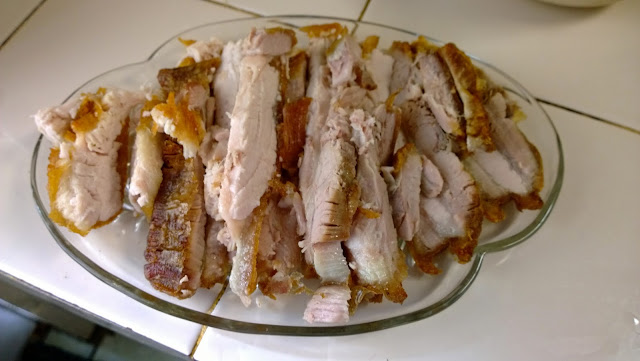 Instead of the usual chunks, I cut up the lechon kawali lengthwise. 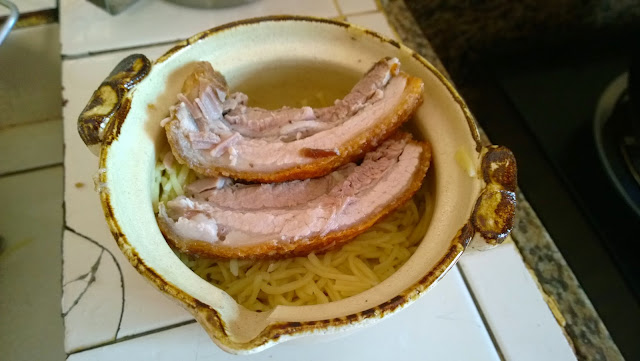 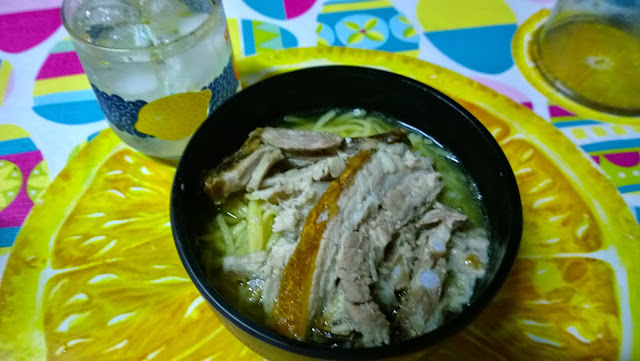 Since I had quickly dipped the lechon kawali in the broth,  the skin retained some of its crisp and crunch.   The broth was flavourful and yet light,  and the lechon kawali definitely transformed my ramen experiment into a Pinoy eating experience.

Posted by Labrador Lady at 12:18 AM No comments: