Hokkaido, the major island where Sapporo is located, is surrounded by cold northern seas and thus there is an abundance of all types of seafood.
For dinner on our first night in Sapporo, my colleagues from Tokyo said that we would go to a  Chinese restaurant specialising in seafood.
This did not sit quite well with me, as I wondered why on earth would I want to eat sweet and sour fish and pancit canton in Sapporo?  They said we would go to Yosuko, highly recommended by Sapporo natives. 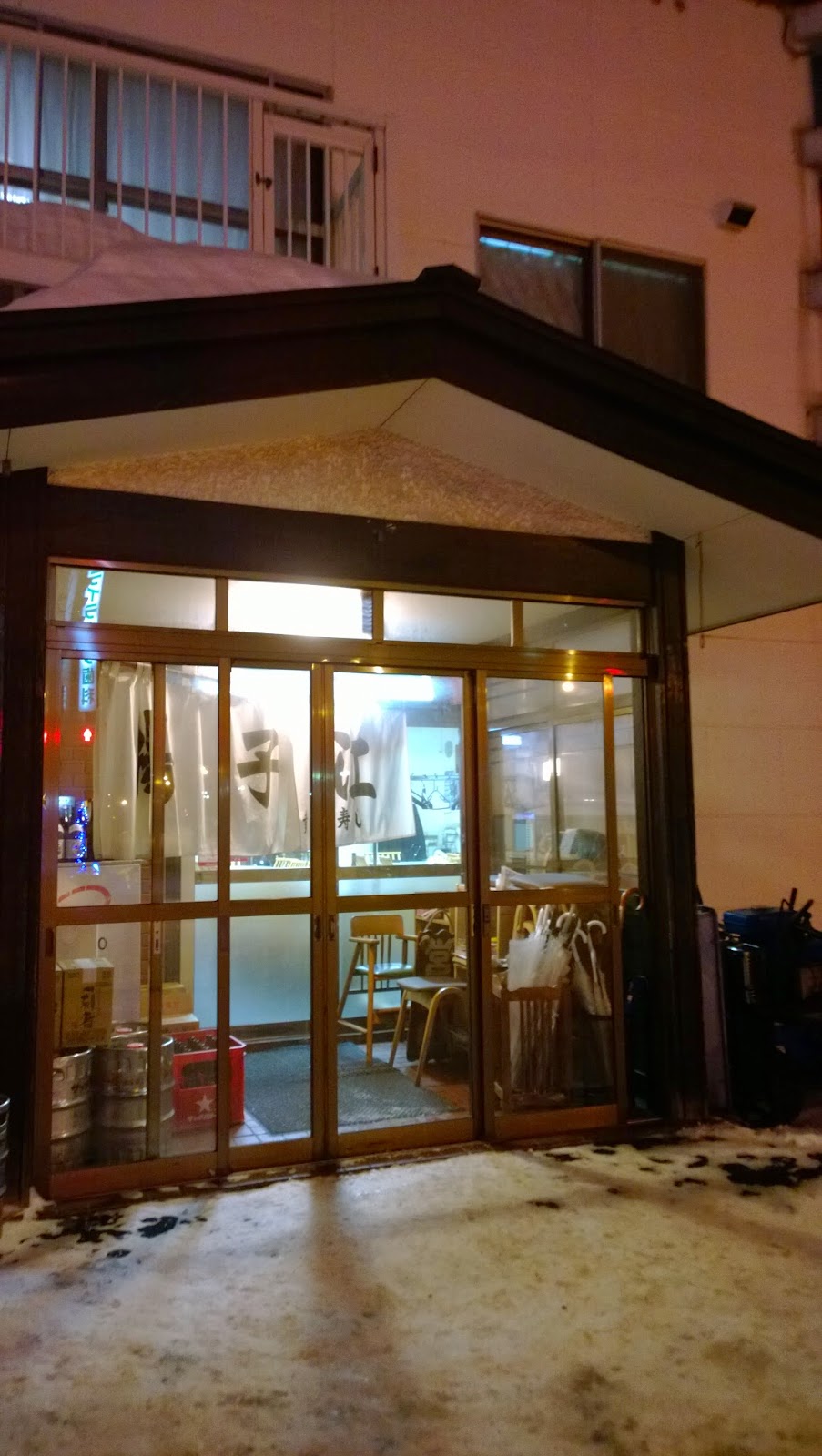 Yosuko  must be really popular -- the cab driver knew where to take us right away.
We traveled through  snow bound streets until we reached this simple, unremarkable building.
The restaurant is located on a street corner in a quiet area.  Note the slippery icy walk  leading to the entrance. 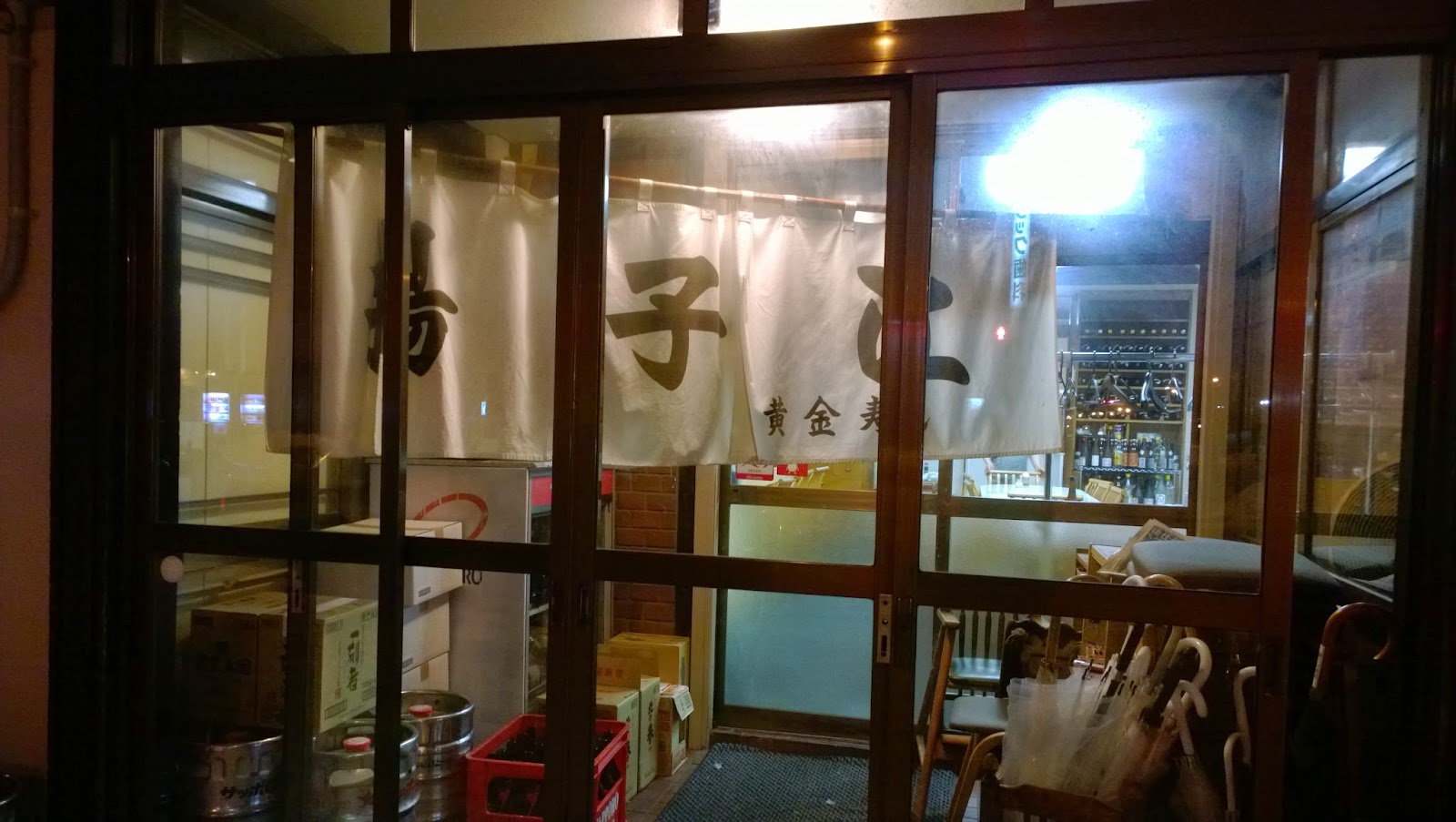 I love these unpretentious, casual eating places where the food and not the ambience is the centre of attention.  I felt much better when I saw that Yosuko did not seem like a typical Chinese  restaurant -- perhaps I wouldn't have to eat sweet and sour fish after all. 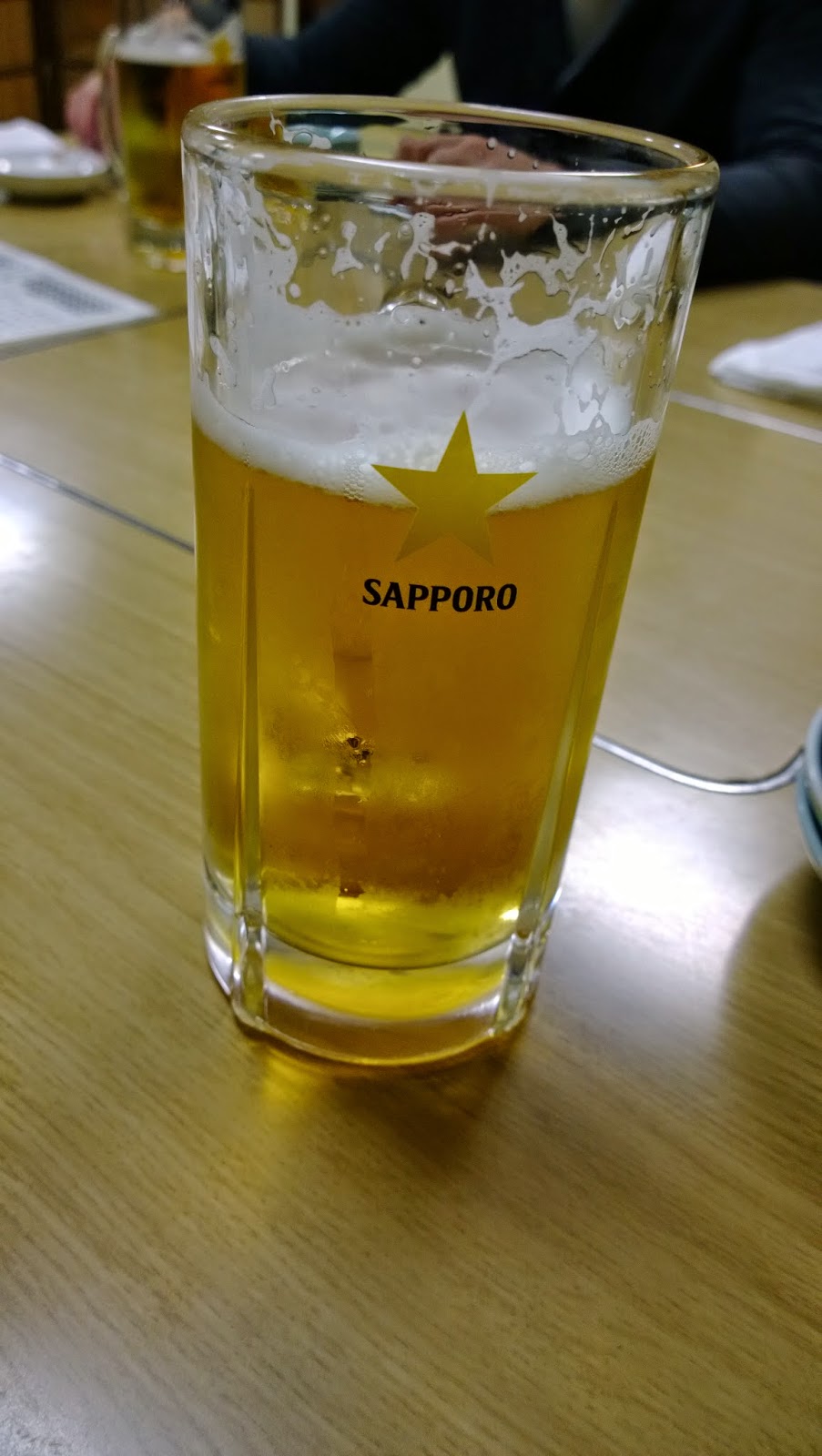 Despite the snow and freezing temperature outside,  cold Sapporo beer was the perfect drink to start with.   While we were enjoying our beer, I told my colleagues about my initial misgivings about eating in a "chinese" restaurant.
They were so amused   -- I needn't have worried they said.   Yosuko is a seafood restaurant with both chinese and japanese dishes.  It's also labelled as a Chinese restaurant because of the name -- Yosuko is a  Japanese name for the Yangtze river.
Hai, so desu ne! 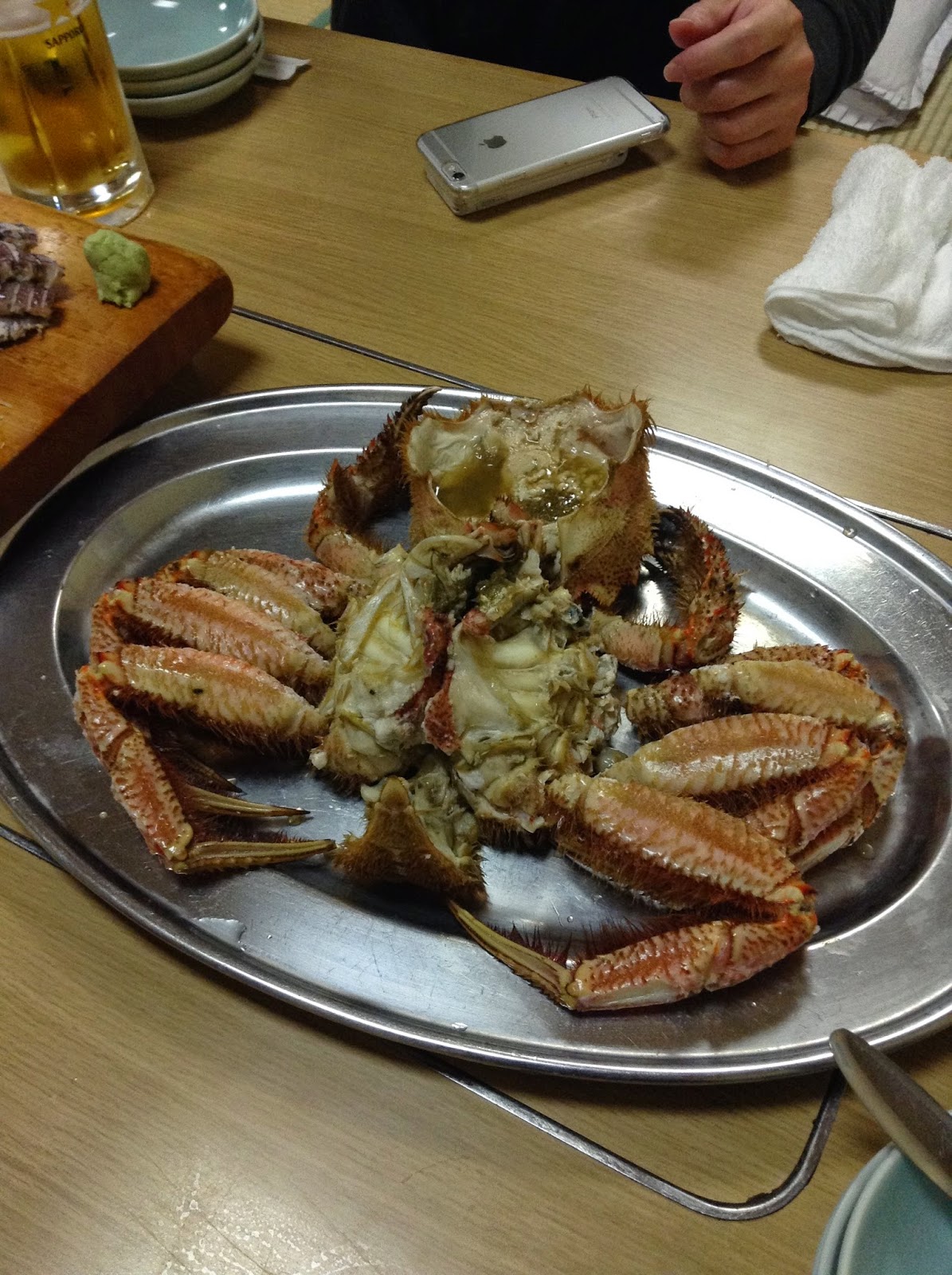 Because it was the season and because it is a Sapporo specialty, it was practically mandatory to order Hokkaido kegani or spiny hairy crab.   One colossal crustacean was big enough to feed all four of us. 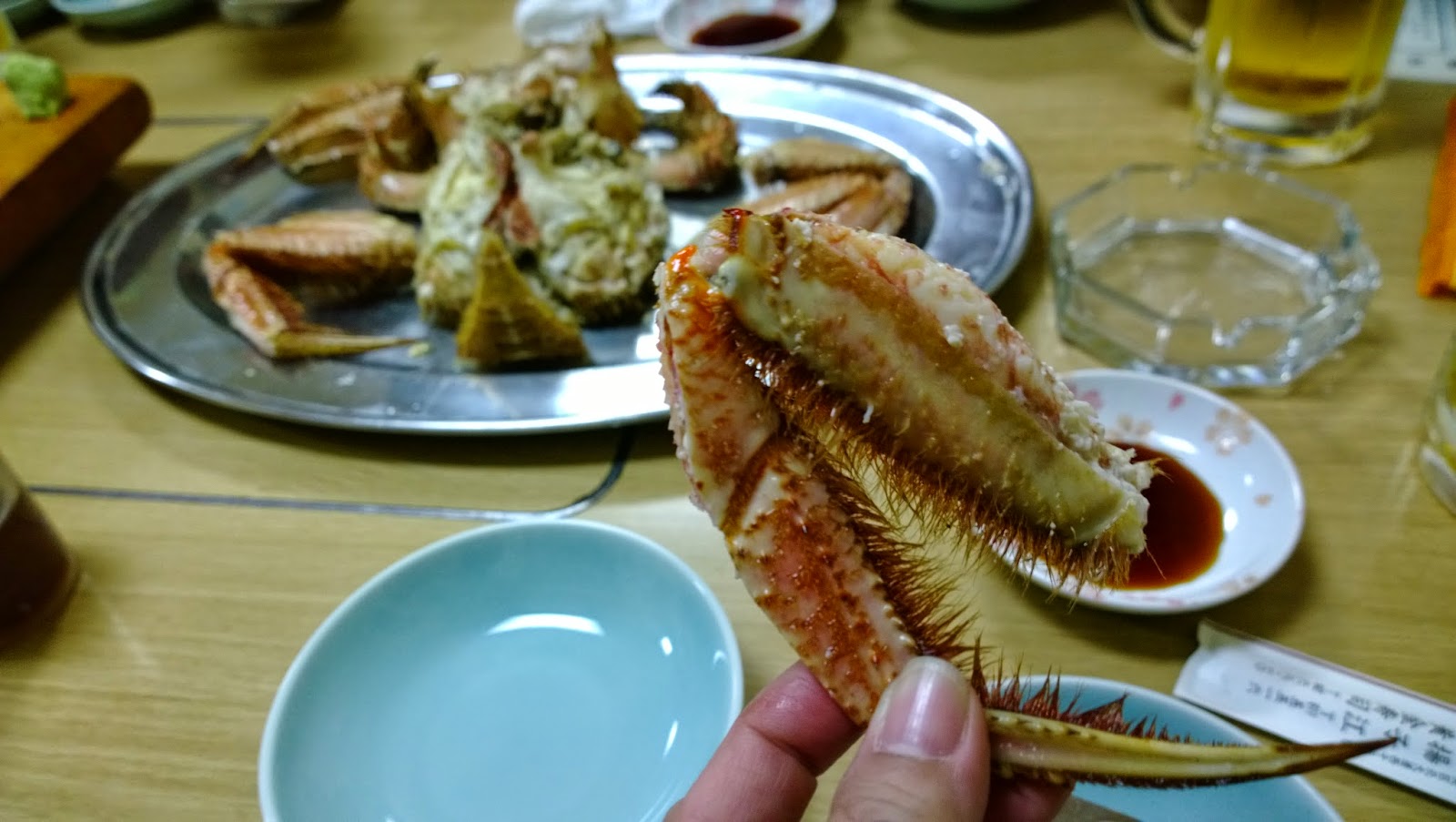 This prodigious crab claw yielded quite a bit of delectable crab meat.  The kitchen had thoughtfully slit the claws open so all I  had to do was to scoop out the sweet delicate flesh. 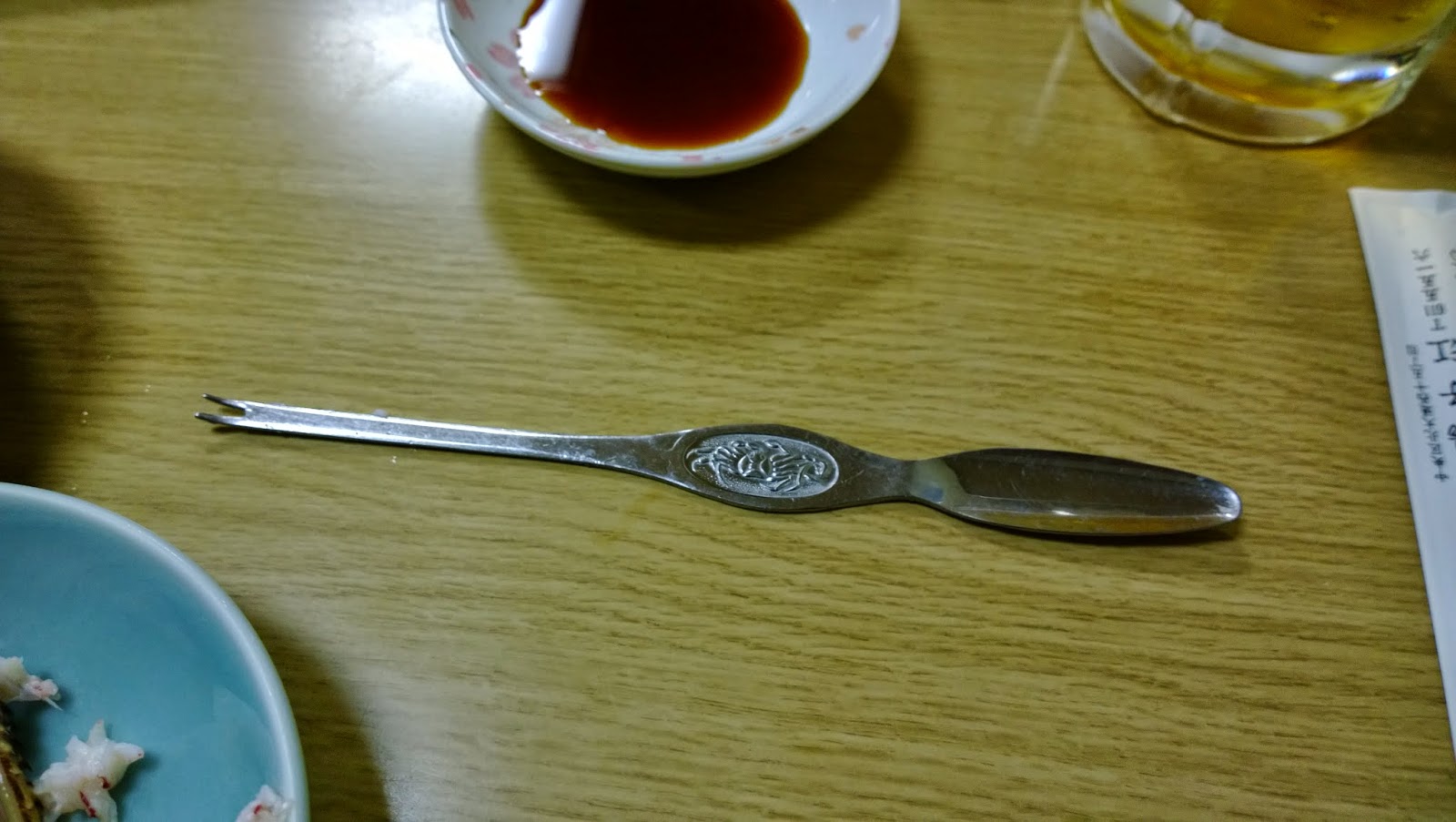 We were all given these little stainless steel utensils to help push out the crabmeat from the claws.   That certainly made it easier and less painful -- those spiny hairy crab legs were no joke. 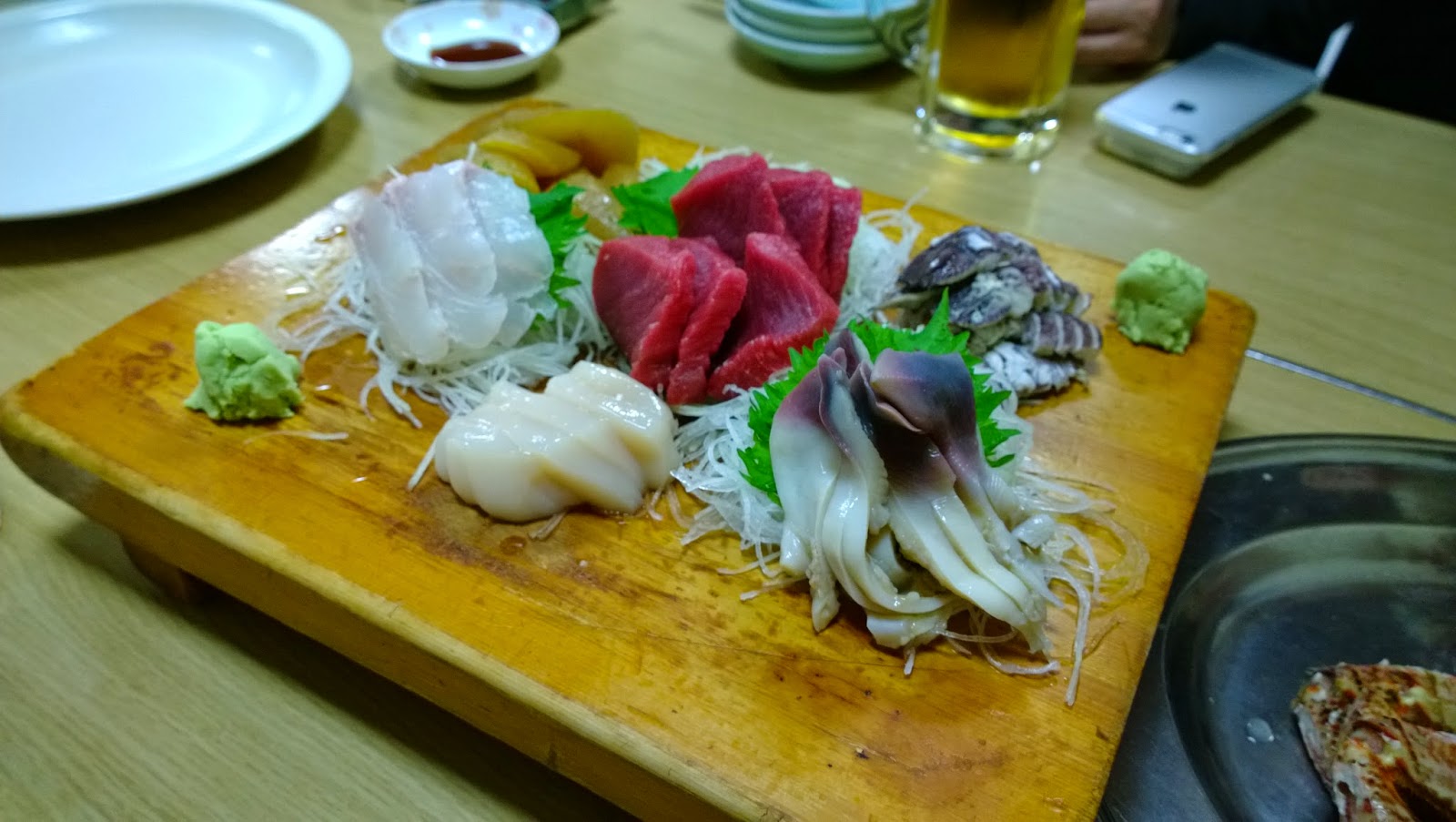 We started with the crab and a large order of sashimi moriawase -- it was excellent!  The tuna was cut from near the belly and therefore fattily succulent.  There were slices of what looked like a large clam which at first glance seemed tough and chewy but was the exact opposite.
Plump scallops, a type of crawfish, large chunks of fish roe and translucent slices of white fish completed the choices on the table. 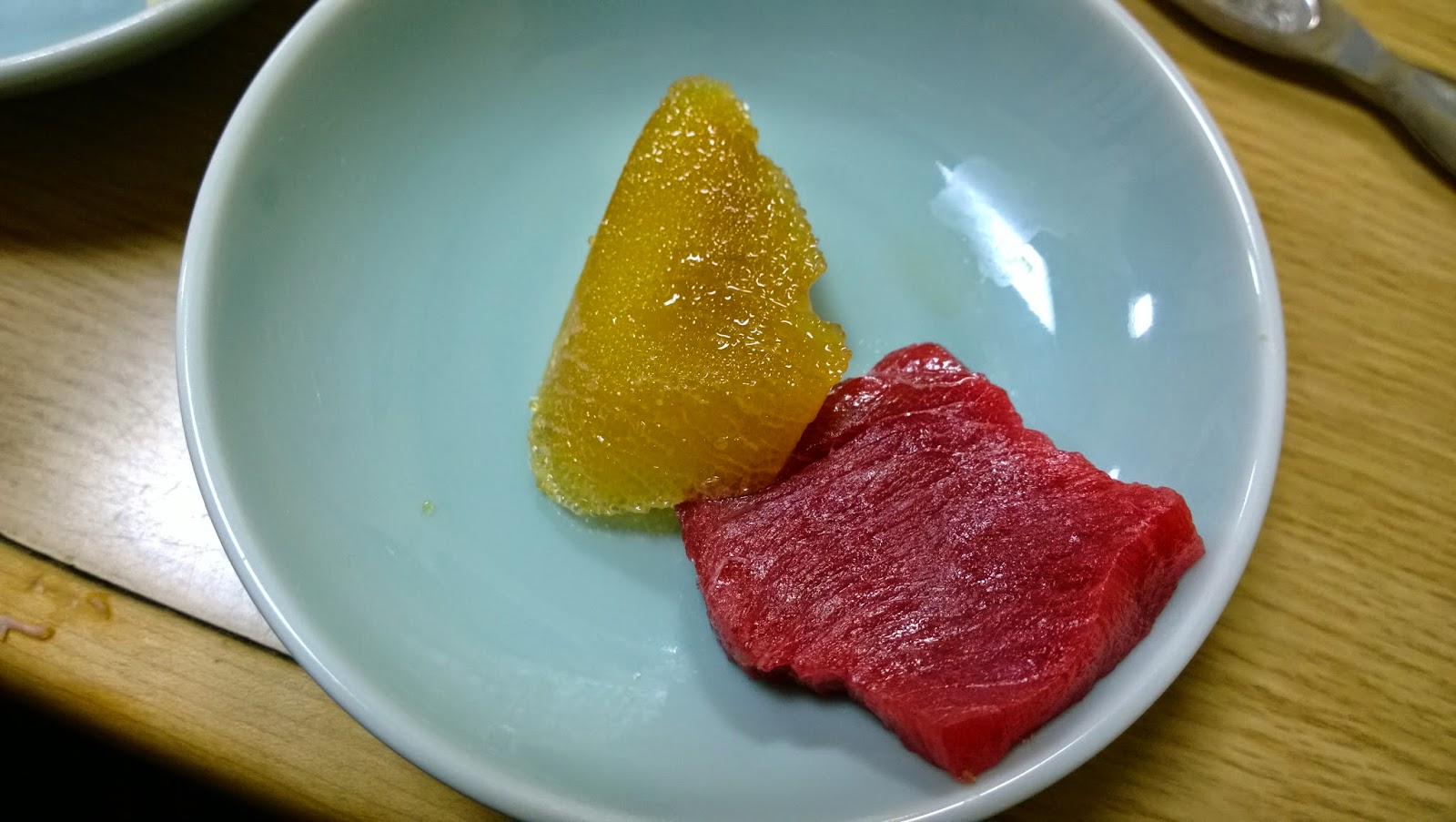 This golden yellow coloured piece which looks suspiciously like a fruit  is a very fine, very firm piece of fish roe.  It had a unique, briny,  fresh- from-the-sea taste.  Thoughts of sustainability crept into my mind -- my porcine alter ego gently pushed them away. 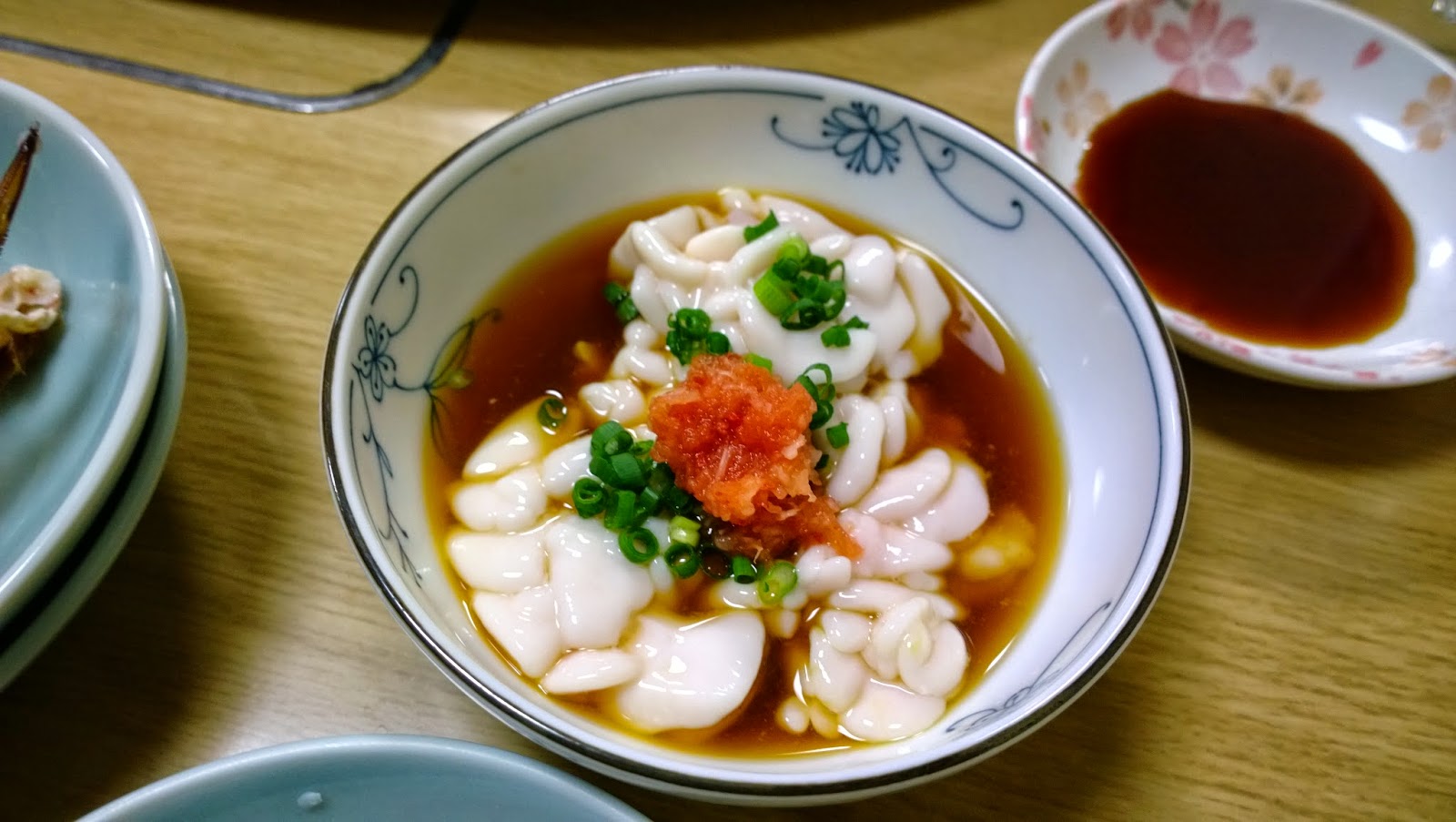 Another dish that my colleagues ordered was shirako in a spicy shoyu sauce.  I like eating shirako but more than that, I enjoy asking my Japanese friends just what it is.
Of course I know what it is -- it's fish sperm sacs, usually cod's.  But I secretly enjoy seeing the normally polite Japanese hesitate as to how they could properly explain just what it is.
I specially remember one who blurted out to me --"it's fish testicles!" then blushed a deep beet red. 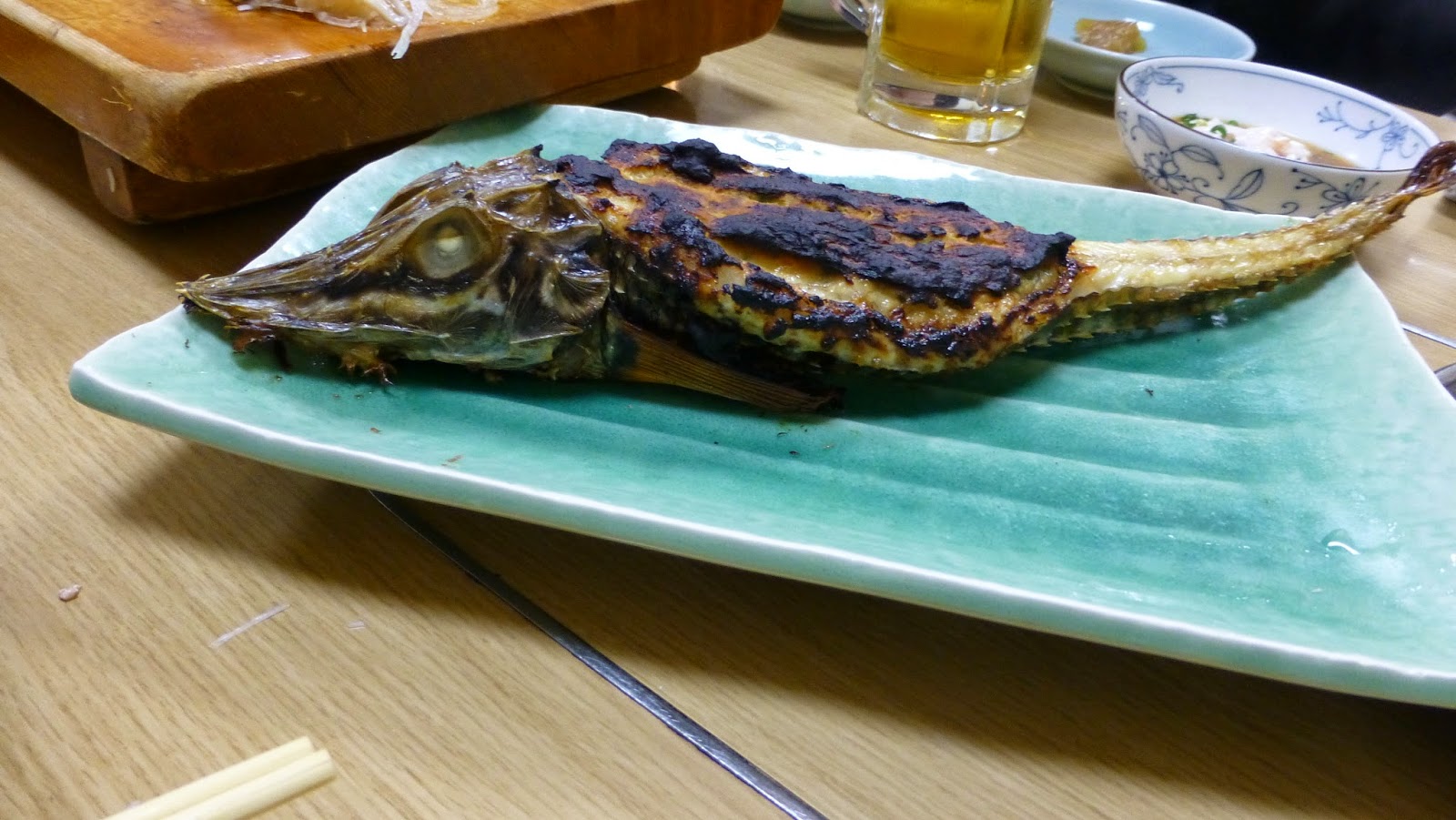 How about this ugly prehistoric looking fish? This is called hakkaku -- in english, it's known as a sail fin poacher fish.  It looked like a throwback from the Jurassic era but my colleagues assured me it tasted much better than it looked.  Hakkaku is another fish  commonly seen in Sapporo's fish markets. 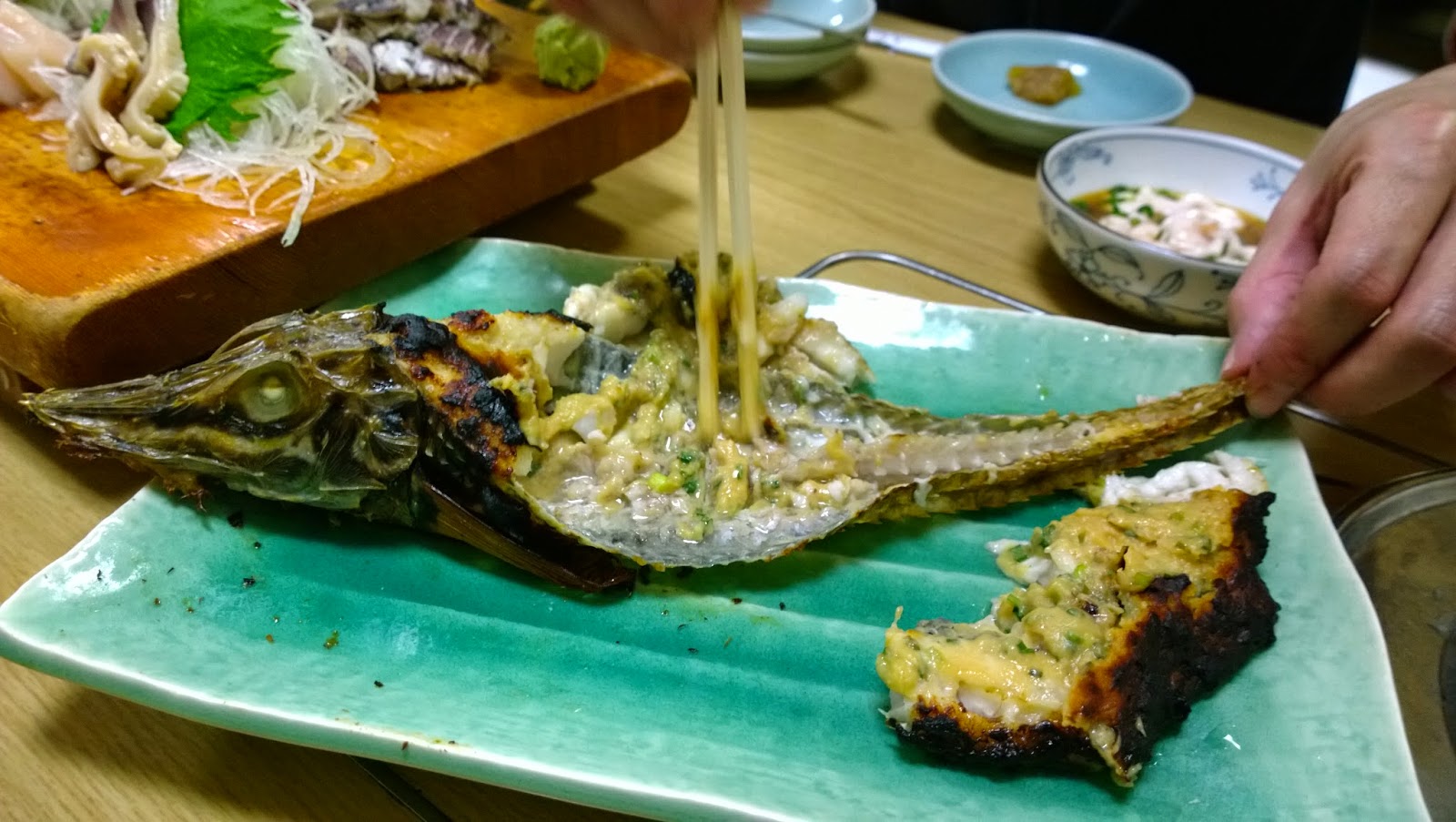 The hakkaku had been carefully deboned then stuffed again with its own flesh mixed with miso and negi,  a leek like vegetable.  The slightly charred hakkaku skin gave way to a rich, creamy, salty deliciousness. 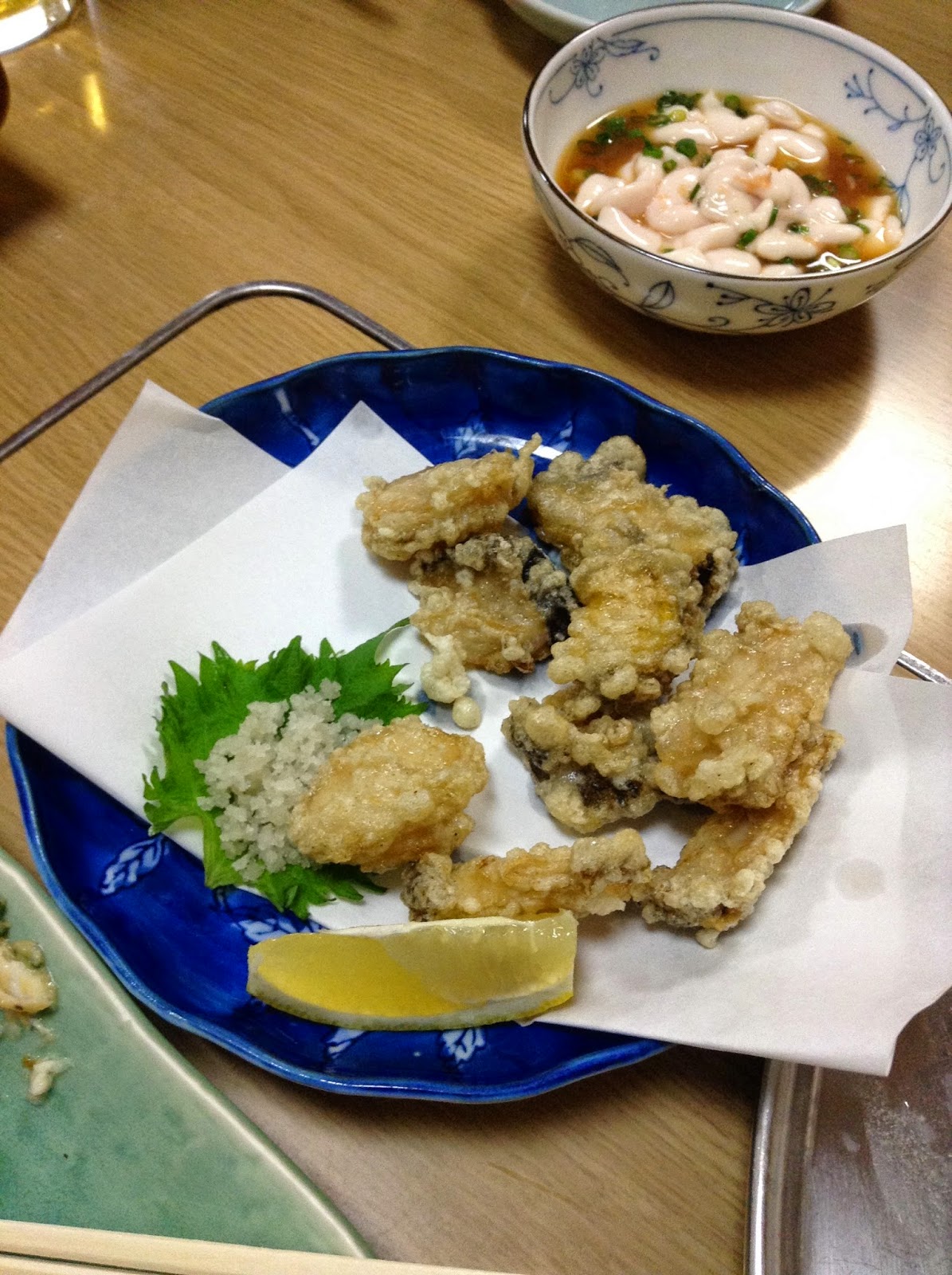 One for the road or one more dish before we officially declared ourselves as onaka ippai.
This is awabi or abalone karaage.  We should have eaten this once it was served but we were too busy demolishing the hakkaku.  It had cooled and become chewy by the time I got my chopsticks into it -- zannen desu ne. 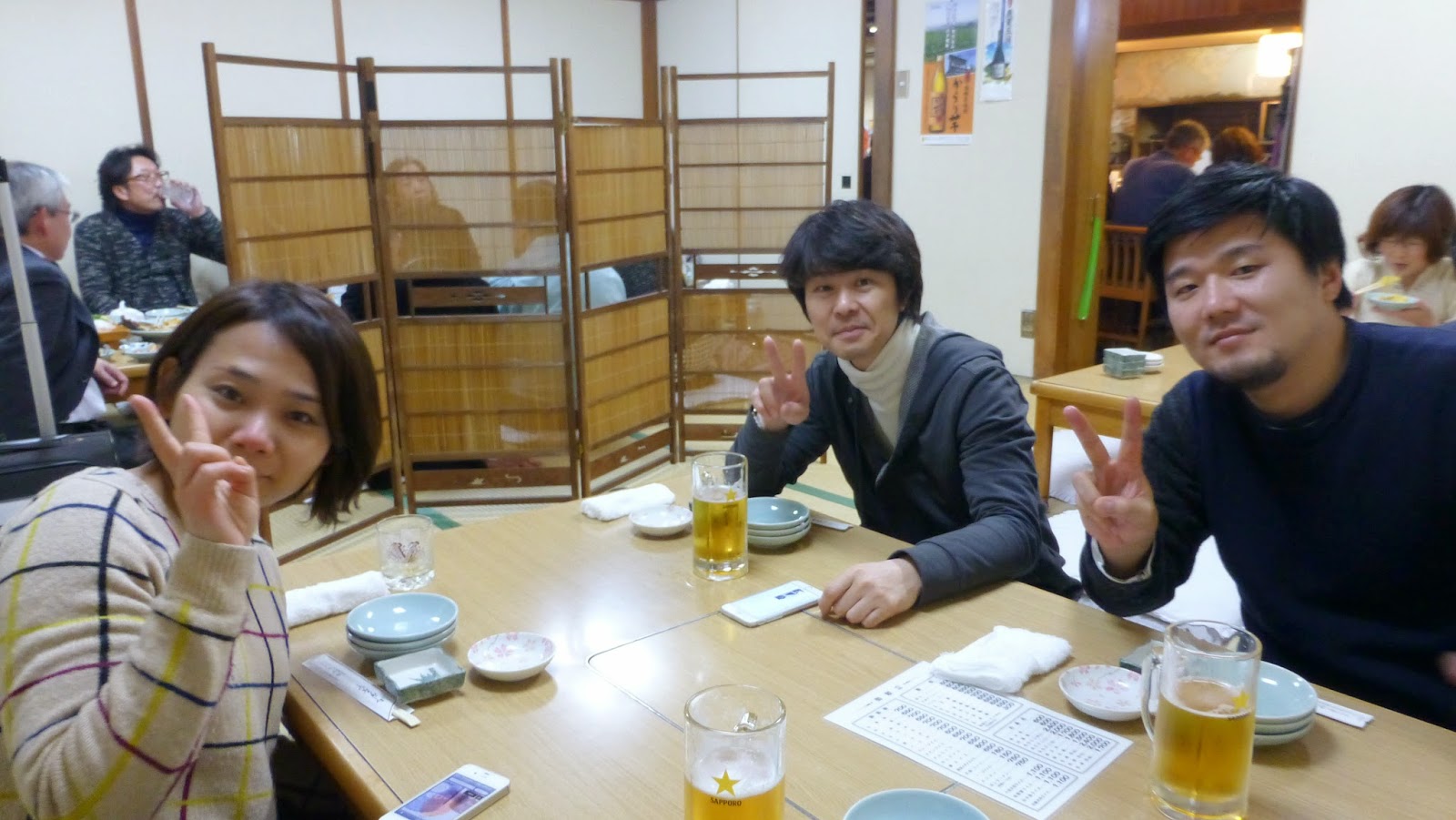 Here are my three young colleagues from Tokyo who were with me on this business trip. A big arigato to them for taking me to discover Sapporo's seafood delicacies at Yosuko!