Day 3 was our full day to go around Ilocos Norte to visit some of her more  noteworthy churches.  Some of the Amigos had been around Ilocos before and for some, this was their first time in the province.  I hoped that the day would hold some interesting discoveries for everyone. 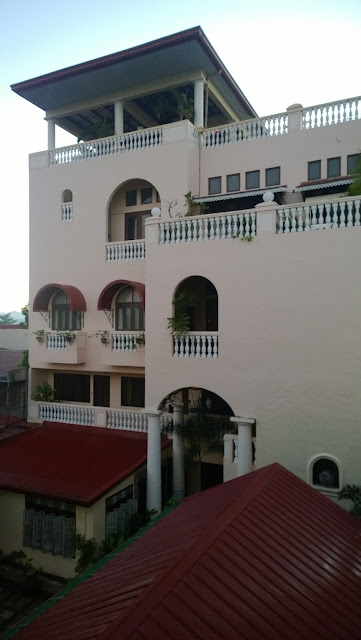 We woke up bright and early at Balay da Blas, a delightful B&B in Laoag City.  Originally built out of owner Sammy Blas' ancestral home, Balay has been so successful that it now includes a more modern three story hotel beside it.  We stayed in the Executive, Junior and deluxe suites in the original building where rooms are furnished with antique wooden furniture and enough personal knick knacks that make you feel like you are a guest in Sammy Blas' home. 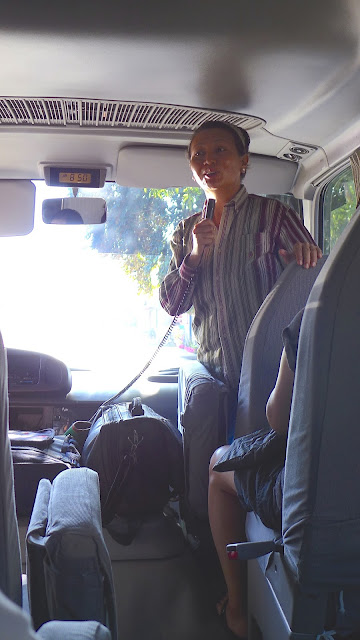 To get a feel of the places we would go to, I hired a tour guide from Ilocos Heritage Tours.
Michelle Jacinto,  genuine Ilocana and native of  Laoag City  regaled us with  local,  cultural and historical facts. With a little prodding, she also sang Pamulinawen and Manang Biday for us.  A real trouper indeed!
When traveling,  I  believe that having a local guide take you around is the one of the best ways to maximise your enjoyment of the place. 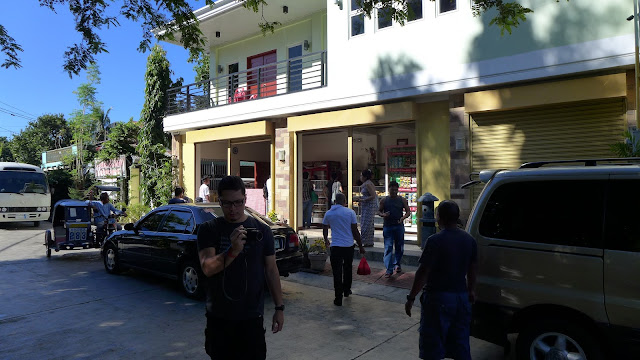 Our first stop was Pasuquin Bakery in Pasuquin, a few towns north of Laoag City. This is where a unique and delicious biscocho is made.  It comes in two varieties -- as a soft roll lightly flavoured with anise, and as a crunchy biscocho.  The soft roll (which keeps for just a few days)  is best eaten warm, with good butter while  the crunchy biscocho can last for several weeks and is perfect with coffee. 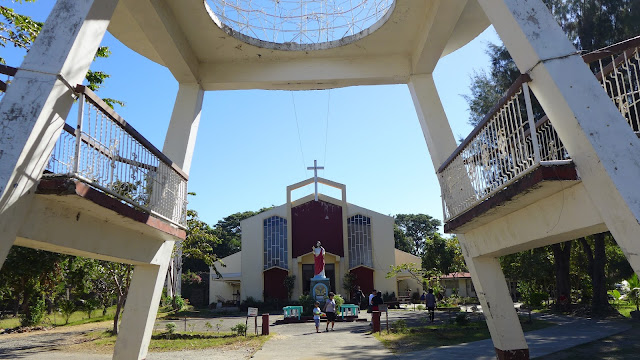 From the bakery, we visited the Church of St James, right by the Pasuquin town plaza.  While the church is new and not one of the heritage churches of Ilocos,  we wanted to go and say hi to our Amigo,  Santiago. 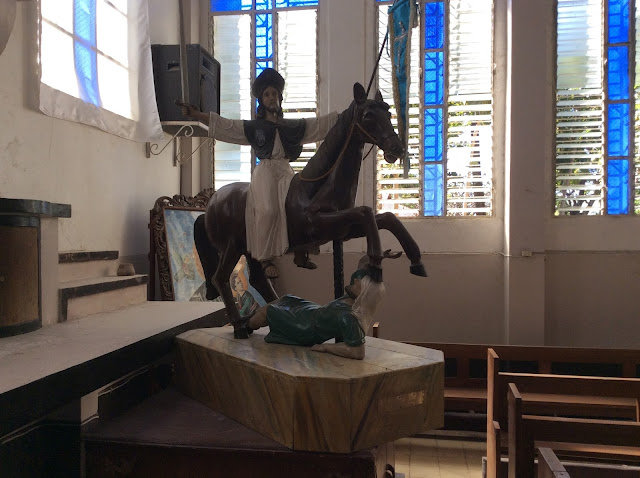 I found this statue of Santiago Matamoros inside the church, tucked away to one side. 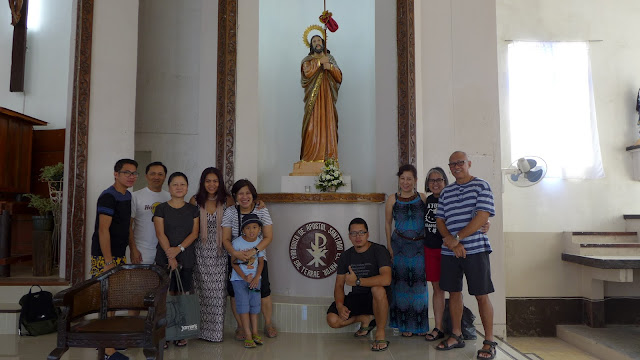 This larger statue of Santiago as Peregrino is more prominent, located on the right side of the main altar.  Time for us to take a photo with our Amigo! 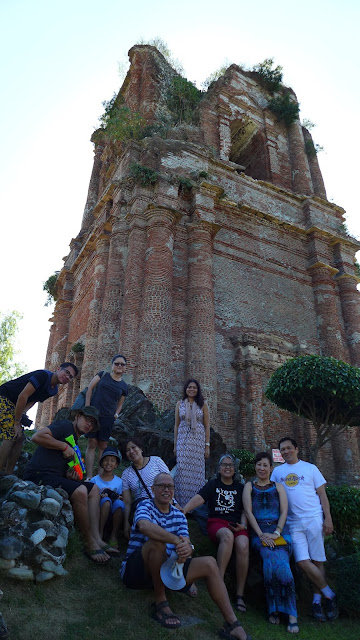 From Pasuquin, it was a short drive to the next town, Bacarra where we gamely posed in the
shadow of the famous earthquake damaged bell tower of St. Andrew's Church, also known as
Torre Ti Bacarra.
Built in the 1700s,  the bell tower's dome has been completely damaged along with the top floor but what is left is still quite spectacular.  The surrounding area has also been landscaped to make for a more striking photo setting.  This landscaped portion around the tower was certainly not there when I first visited Bacarra many many years ago. 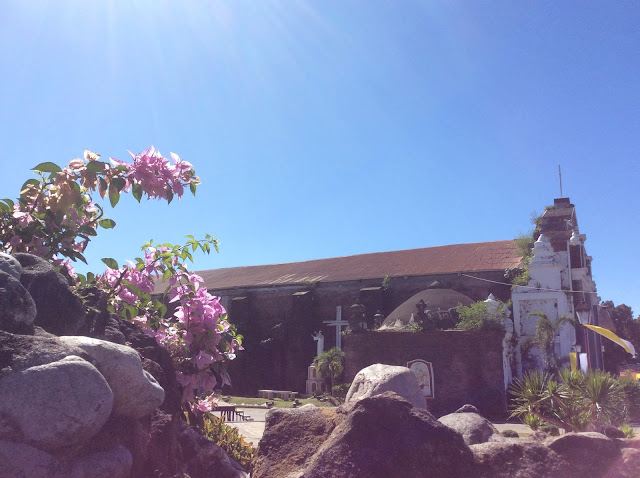 Like most of the churches in earthquake prone Ilocos,  St. Andrew's in Bacarra hews to the earthquake baroque style of architecture where buttresses help prop up and strengthen the nave or the main part of the church. 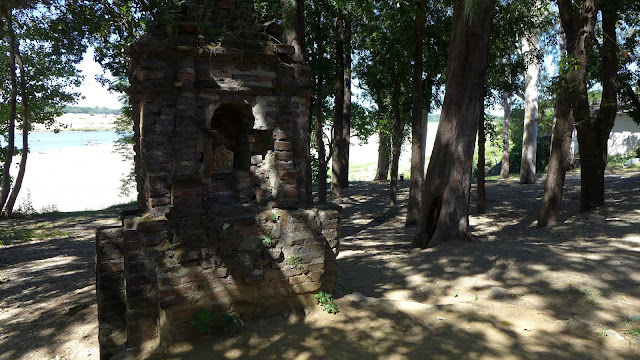 From Bacarra, we drove to the town of Sarrat where the church of Sta. Monica sits prettily by the banks of the Padsan River. 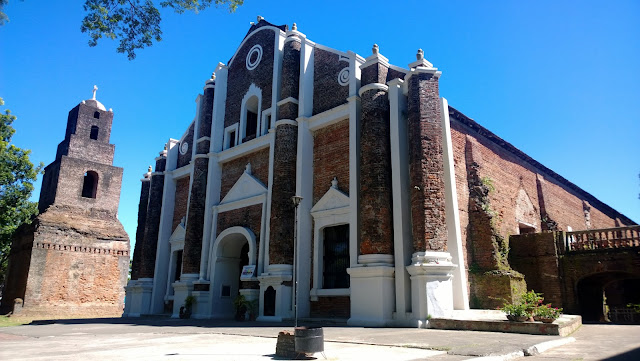 Built by Augustinian friars in the 1600s, Sta. Monica church has been damaged through the centuries by fires and earthquakes.  With each calamity,  the church has been reconstructed and rebuilt and while the current facade no longer conforms to what it originally looked like,  it is still one of the must see churches in Ilocos Norte. 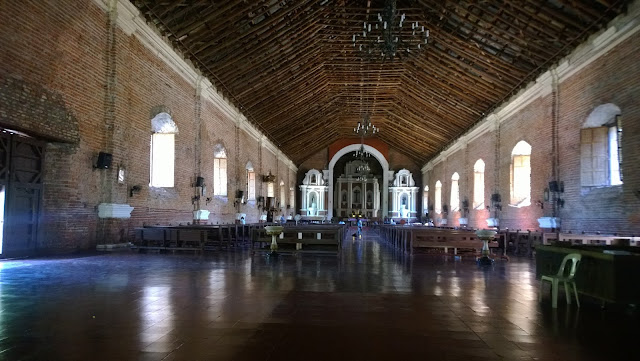 The interiors of Sta. Monica Church feature gleaming tiles, brick walls and the longest nave of any church in Ilocos Norte.
Don't forget to look up and marvel at the ceiling,  composed of a system of wooden trusses that hold up the roof.  Brick walls with large windows allow natural light to stream into the church. 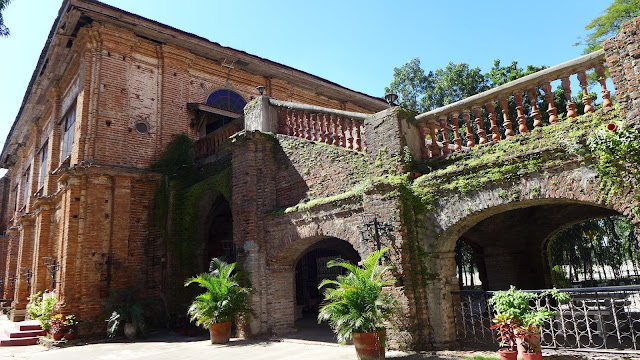 Another interesting and unique feature of Sta. Monica Church is the brick bridge that connects the convento to the church.  Picture pretty, it makes me think of Maria Clara, azoteas and secret trysts with Ibarra. 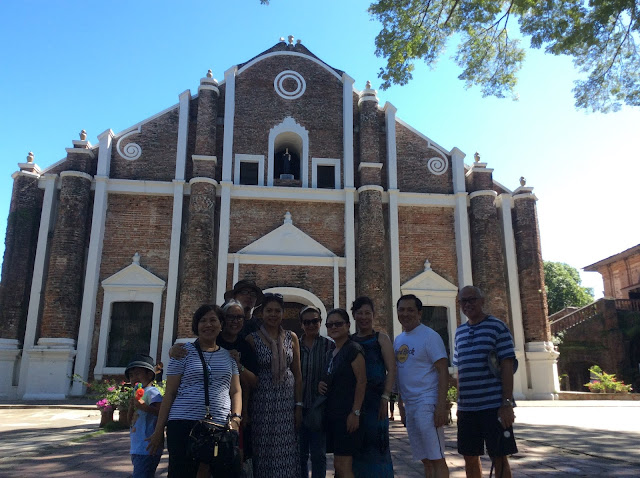 We pause and pose for a moment, in front of historic (and indestructible) Sta. Monica church in Sarrat. 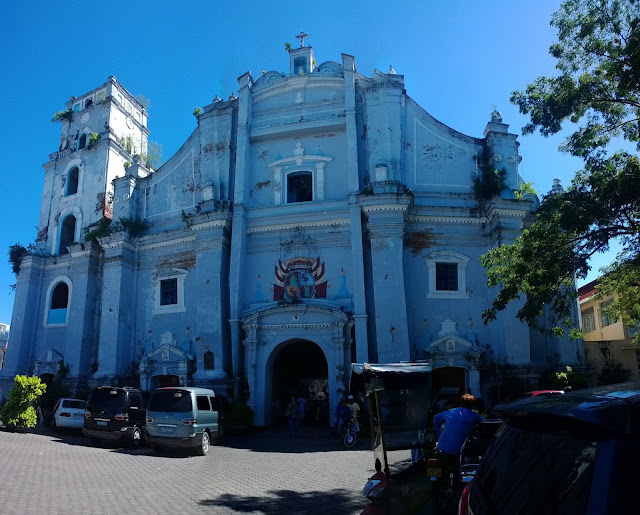 From Sarrat, we followed Padsan River to the church of San Nicolas Tolentino in the municipality of San Nicolas.  This town is connected to Laoag City by the Gilbert Bridge and you pass by the church when you exit Laoag headed to Manila.
Can you see the many flags and the coat of arms of Spain, which adorn the top of the main entrance way? 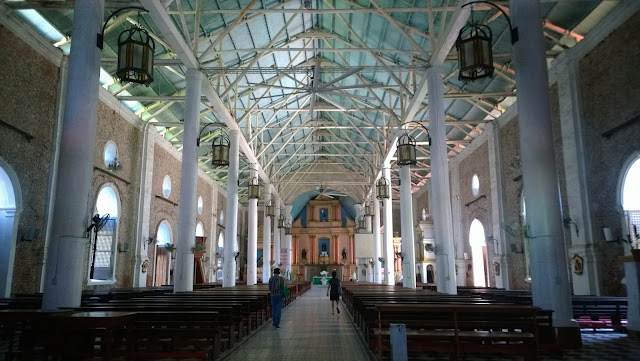 The church is named after an Italian Augustinian friar, St. Nicolas of Tolentine, who was known for his simple and pious ways. He must have been quite a favourite with the Augustinian missionaries who brought Christianity to Ilocos because they named  three parishes after him  -- in San Nicolas and Vintar, Ilocos Norte and in Sinait, Ilocos Sur. 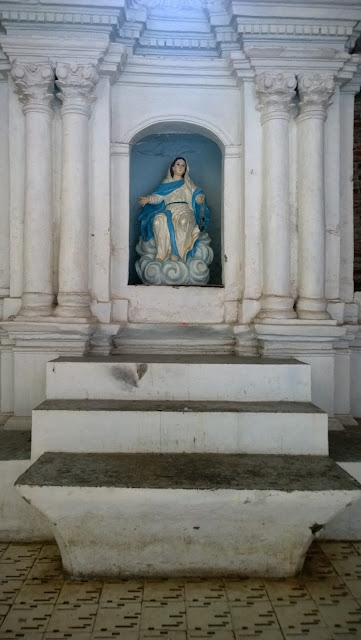 A lovely and serene statue of the Blessed Virgin is placed by the wall,  and can be seen once you enter the church. 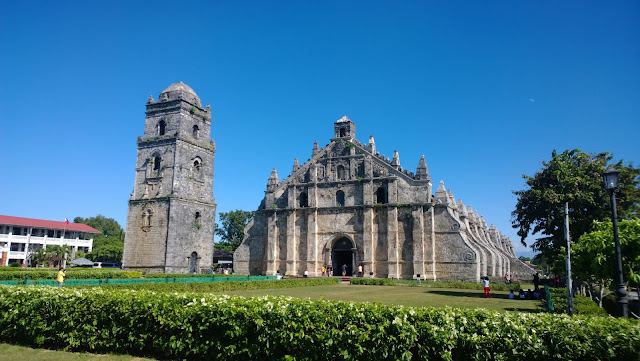 Our next stop after San Nicolas was the always amazing St. Augustine Church in Paoay, one of
only four churches that have been designated as UNESCO World Heritage Sites in the country.
Built solidly in earthquake baroque style, it sits massive and unperturbed in the middle of the rapidly (and sadly) modernising church grounds.
The church was constructed in the 1700s and has been damaged by earthquakes but rebuilt and reinforced with 24 buttresses -- the widest and the most that I ever seen in any church in the Philippines. 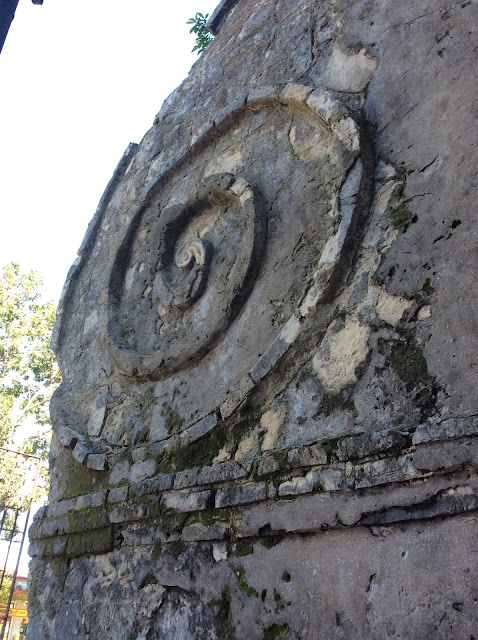 Delicate spirals or coils can be found on the buttresses, adding gracefulness and fluidity to these otherwise strong and mighty structures. 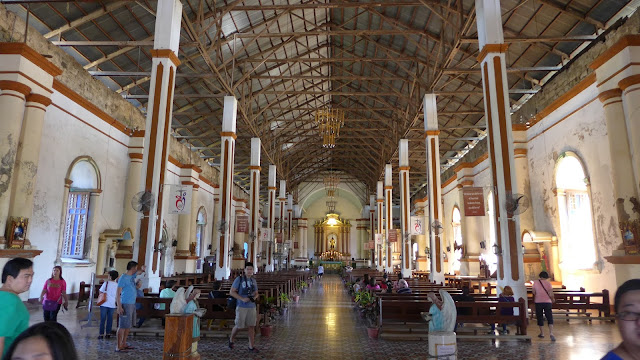 There were quite a number of local tourists visiting Paoay Church.  The interiors unfortunately are not as impressive as the exterior  -- I wish that when re-constructing or re-building classic structures,  those in charge try to be as faithful to the original as they possibly can. 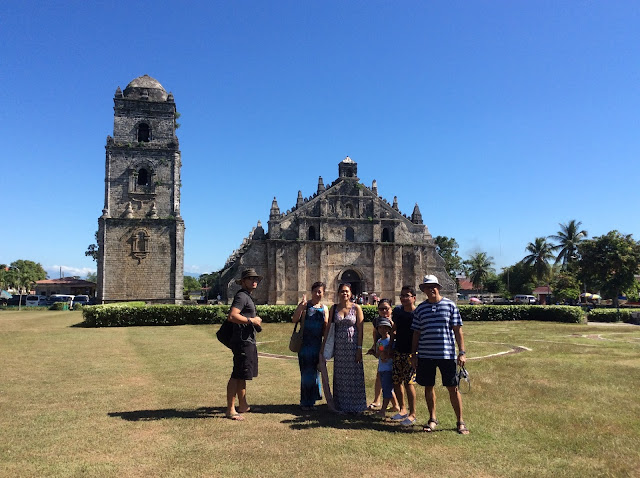 Paoay Church is truly awe inspiring.  I have visited all four UNESCO World Heritage churches in the Philippines and this is definitely my favourite.   The towering belfry stands apart and is as imposing and impressive as the church.  Seen together, they form one of the best examples of church architecture in the country. 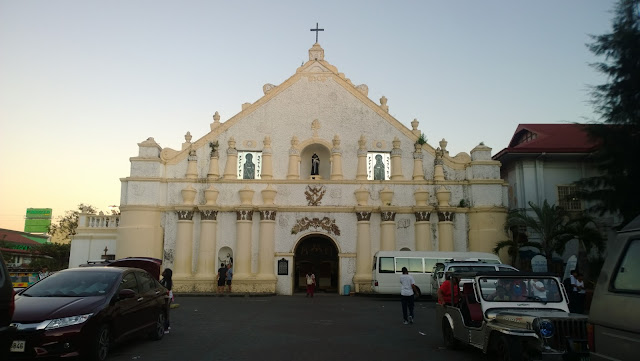 Our tour guide Michelle had designed our itinerary so that the Cathedral of St. William the Hermit in Laoag City would be our last "visita iglesia"  for the day.  The Cathedral stands out with its light coloured plastered facade and its rounded columns.  It looks a bit different from the other churches we had been to.  Alcoves on the upper level, in between shorter and more squat columns, feature statues of the patron saint and Sts. Peter and Paul. 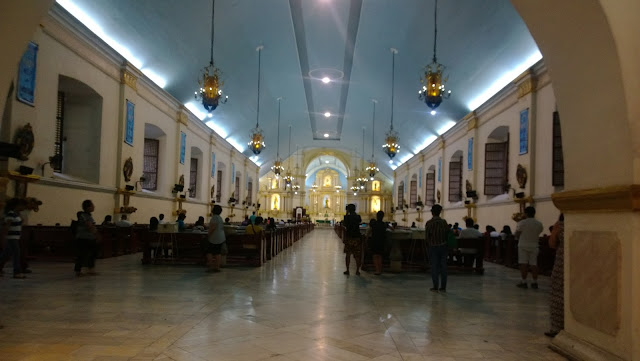 Mass was ongoing when we arrived so I didn't want to intrude by taking too many photos.
You get a better sense of the cathedral's expansive size when you see the thick walls and the wide and deep windows on the sides. 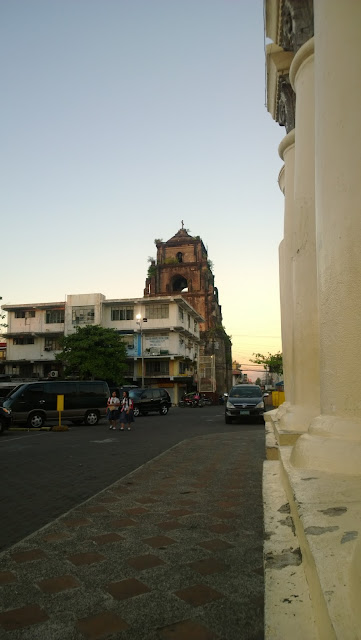 The church of St. William the Hermit must have occupied quite a large area when it was built.
The  bell tower, which is always located within church grounds,  is now a good two blocks away.
Retaining its original brick facade, St. William's bell tower stands several stories above the modern buildings that  surround it.  I can imagine it must have been a key look out point for Laoag in the olden days.
The November light was slowly fading as we stood outside the Cathedral of St. William the Hermit.
I was happy that we had managed to visit quite a number of Ilocos Norte's memorable  churches on Day 3 of our Northern Camino.

NB Many thanks to my husband Jay for some of the photos used in this post.

Posted by Labrador Lady at 6:53 AM