Fifty years ago ... I can't even believe that I'm actually starting this post with those words ...
but yes, fifty years ago when I was a child (let me qualify that),  my family and I would
go to Cavite every summer.
We would drive all the way from Malabon, Rizal where we lived,  through Las Piñas (the
Coastal Road and Cavitex were still very much in the future),  past the salt flats and the
roadside  talaba (oyster) vendors until we reached the "in" summer destination of the 50s and
the 60s,  Lido Beach Resort.
Unfortunately, Manila Bay became more and more polluted until finally, we had to stop going
to Lido Beach.  We also somehow stopped going to Cavite.  And much later on,  the roads became
too congested that there was just no reason to venture this way.
So when I received an e-mail from Clang Garcia of Food Holidays telling me about their upcoming Cavite Culinary and History Tour, I signed up for Jay and myself -- it would be a chance for me to visit Cavite again and see what I had missed out on all these years. 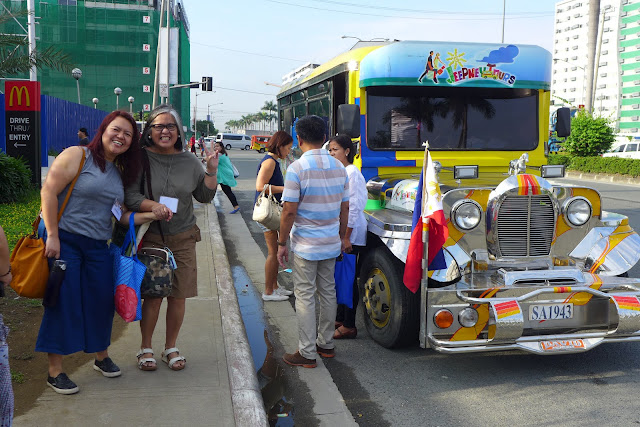 The tour started off from Manila Bay Walk, bright and early on a Saturday morning.
Food Holidays owns and runs #jeepneytours where you get to ride on a colourful air-conditioned jeepney-on- steroids,  it's big enough for 20 people --  such a fun and eye catching way to travel around in. 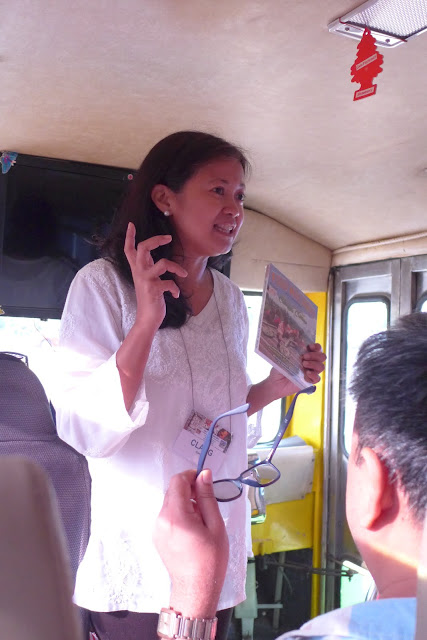 This is Clang Garcia orienting us on what we could expect from today's tour.  Clang is the owner of Food Holidays, creator of #jeepneytours and  a hardworking and passionate advocate of Philippine tourism.   Can I also add how charming and pretty she is? 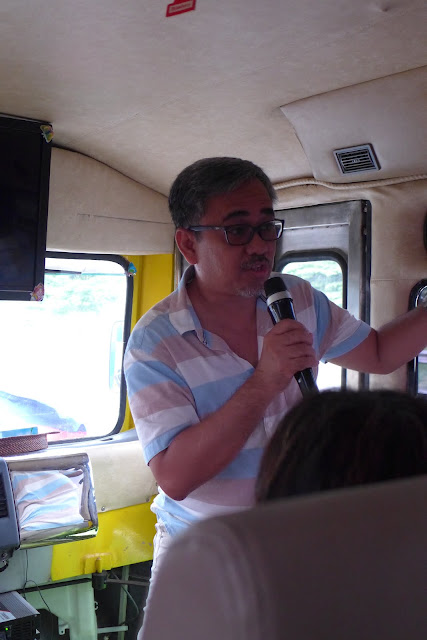 Our guide for today's tour was Ige Ramos -- proud son of Cavite, historian, author, graphic designer, and passionate proponent of Cavite's heritage and culinary traditions.  He proved to be a most informative and entertaining guide, peppering historical and cultural facts with interesting anecdotes and behind-the-scenes tidbits. 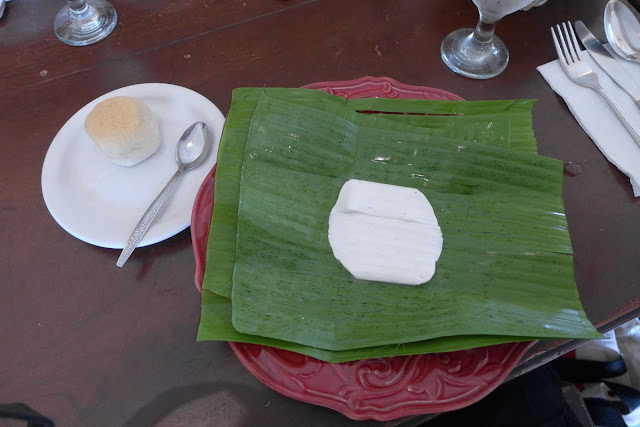 Clang's sub-title for this tour was "One Day Culinary Tour, 400 Years of History".  So of course I expected to taste Cavite's gastronomic delights as we traipsed around her historical sites.  First stop was  a filling breakfast at Malen's in Noveleta where the salty creamy quesillo, a soft white cheese made from buffalo milk was my favourite. 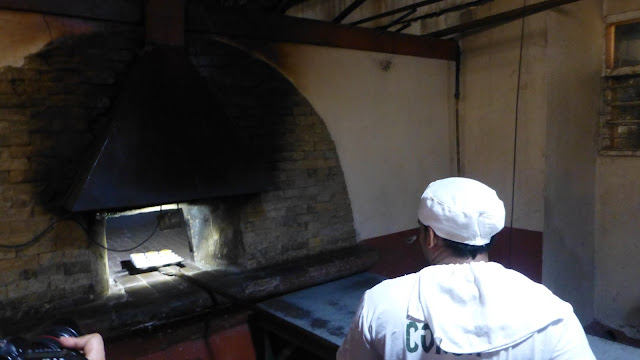 A true mark of a native son is knowing practically everybody and anybody -- Ige had an all access pass to take us behind the scenes of Cavite's food landmarks  This is the pre-war oven of Dizon's Bakery in Cavite City that still bakes their famous bonete and salakot buns. 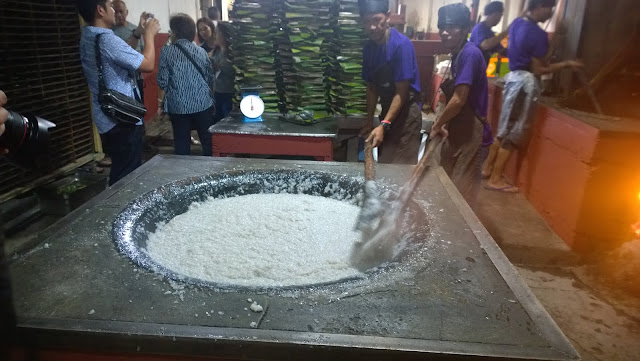 At yet another stop, we learned how the famous Bibingka Samala is made -- from coconut to gata to the bibingka itself. 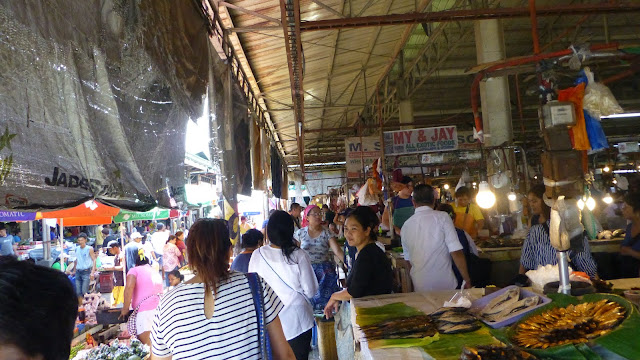 I was so happy to see that the Cavite City Public Market was part of the itinerary.  The local
palengke is a colourful, lively and sometimes frenetic way to fully immerse yourself in a new place.
Saturday is market day at the Mercado del Ciudad de Cavite and thus the perfect time to visit. 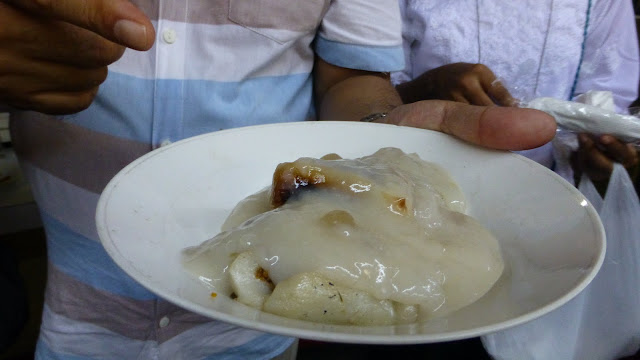 At the palengke, Ige made us all try bibingkoy from the very popular and long standing Aling Ika's Carinderia  (which deserves a separate post unto itself!).  Bibingkoy is a mochi-like rice cake stuffed with sweet red beans or munggo.  We have something very similar in Orani, Bataan where I am from but what makes this particular version unique is that it is slathered with a ginataan sauce -- making it even gooier, richer and yes, yummier. 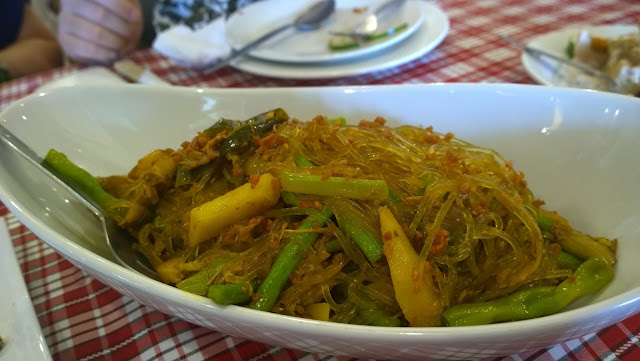 Lunch was at Calle Real in Tanza,  a well established and very local restaurant set in an ancestral home.  This was where I tasted calandracas (fascinating etymology but more on that on another post)
a slurpy but not soupy sotanghon dish that hit all the right notes. 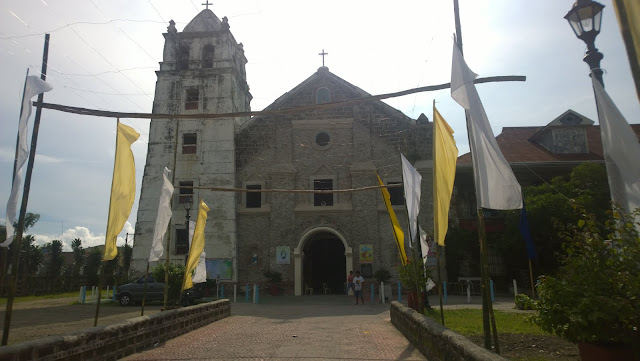 From Tanza, it was an hour's drive to Maragondon, time enough to nod off in the air conditioned cocoon of our jeepney-on-steroids. Maragondon is a sleepy little town with two very important sites.  One is the church of Our Lady of the Assumption,  established by the Jesuits in the early 1600s.
This is a designated National Cultural Treasure, impressive and imposing with its spare, clean lines. 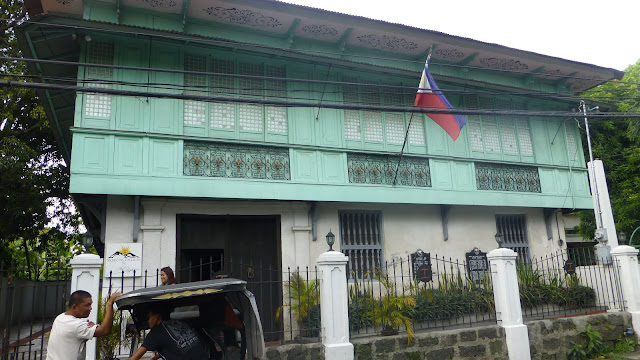 Maragondon's other must-visit spot is just a few blocks away from the church.
My favourite part of the tour was a visit to this museum that I had never heard of.  This is the
Museo ng Paglilitis ni Andres Bonifacio or Museum of the Trial of Andres Bonifacio.
Established in 2001 in the original house that served as the trial venue and very well maintained by the National Historical Commission,  it is a  powerful and moving place but sadly, I think it suffers from a severe lack of promotion.
I believe this  important museum which shows an objective, historical account of the Supremo's last days,  should be more well known and visited by many Filipinos, specially students (more on this museum in a later post). 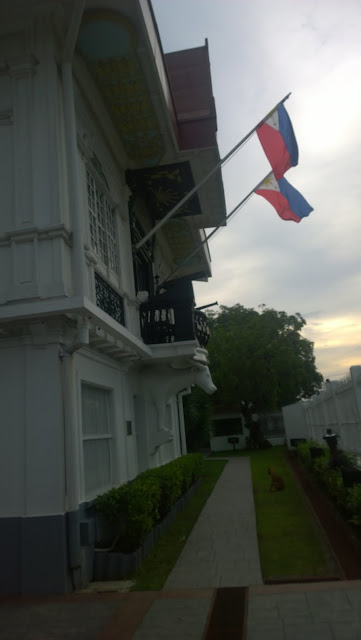 The tour ended with a visit to the Aguinaldo Shrine in Kawit, Cavite.  Interestingly, it was one of the first places we had passed by this morning so in my mind, we had come full circle.  I have been to this place a number of times before and was happy to see that it is even more well run now. 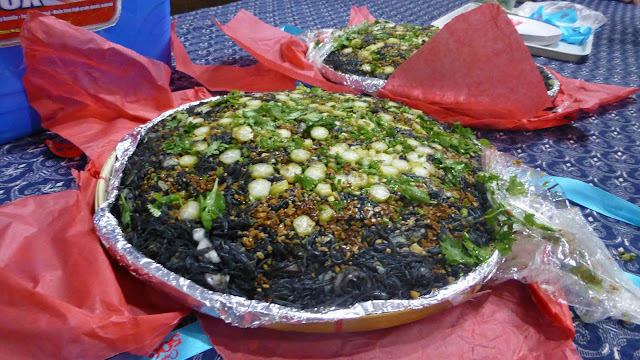 Our stomachs had to come full circle too.  After a thorough tour of the house by one of the
Museum's very knowledgeable guides, we enjoyed our last Cavite specialty for the day --
Pancit Choku en su Tinta or noodles in squid ink sauce.  Topped with thin slices of unripe green
kamias and liberally sprinkled with toasted garlic, it was a delightful ultimate taste of Cavite.
The kamias added a tart and sprightly flavour (not to mention it looked really pretty against the black noodles)  thus  balancing off the umami linamnam of the squid ink.
Nowadays most of the new and "fancy"  Pinoy restaurants serve a version of squid ink pancit
but Cavite's original dish, this one from Asiong's Carinderia is a hundred times better than any
I  have tried. 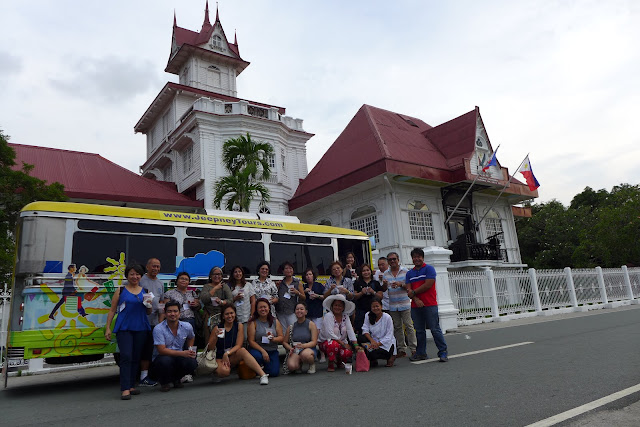 Before the light completely faded, we had time for a group photo in front of the Aguinaldo Shrine, beside Tour Holidays' vivid, varicoloured jeepney-on-steroids.  We each had a plastic cup of Asiong
Carinderia's special halo-halo -- a cold and reviving way to end this memorable culinary and historic tour of Cavite! 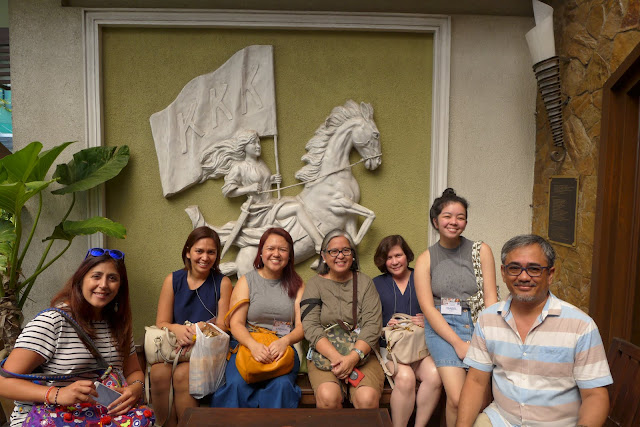 Mabuhay ka, patriotic Caviteño Ige Ramos!  Thank you for a remarkable KKK (Kainan at Kasaysayan sa Kavite)  experience.  It was a memorable way to discover the historical treasures
and culinary gems of Cavite.