Culinary Historians of the Philippines' Lasa at Pananampalataya Tour of Lipa

A few months ago, I was introduced to a group called CHOPS -- Culinary Historians of the Philippines.  This is an offshoot of an organisation based in the US which has chapters in various cities.
The founder of CHOPS,  a very engaging and energetic lady, Regina Tolentino Newport assured
me that the group was open to any one interested in Filipino food -- studying it, preparing it, propagating it and yes, most important to me -- eating it!
In addition to lectures and conferences to promote our varied culinary traditions, CHOPS conducts food tours to various towns and regions, bringing members to see, experience and taste the different aspects of Philippine cuisine. 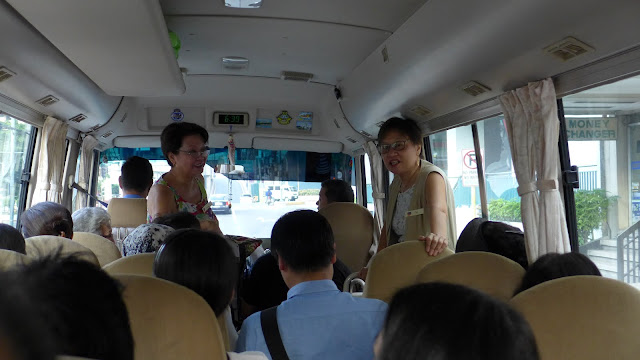 One fine morning in September, Jay and I joined the last scheduled food tour for the year. Dubbed Lasa at Pananampalataya sa Lipa, CHOPS promised that the itinerary would be a good balance of food, faith and history.
Lipa City is a place I know well since my mother spent many years working and living there.
Most of the group piled into a coaster and were given a  warm welcome by Regina (on the left) and CHOPS president,  Pia Lim Castillo (on the right). 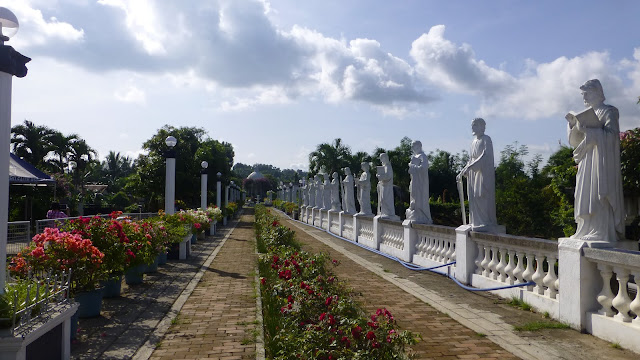 Our first stop was the Marian Orchard, just a few minutes off the Balete exit on the STAR tollway.  Designed like a sprawling European villa with lots of religious statuary,  it is a popular destination during Holy Week and Easter.  Statues of saints line a path that leads to a gazebo where a statue of Our Lady, Mediatrix of all Grace stands. 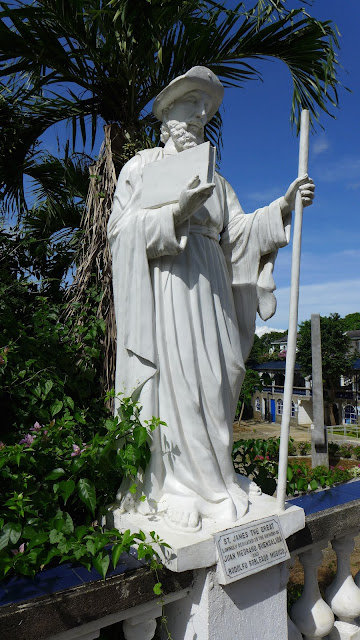 I knew I would find my Amigo Santiago here! At the top of a small rise is a replica of the Christ the Redeemer statue that you would see in Brazil.
Statues of sheep graze amidst the colourful bougainvillea blossoms and carefully trimmed trees and hedges.  A bit eclectic -- but everything works well together. 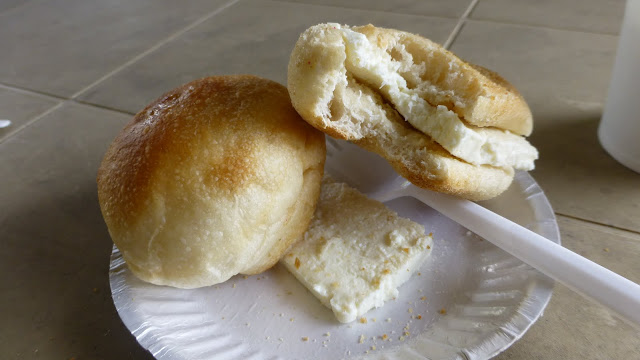 First taste of Lipa!  We were served a light breakfast of Lipa's famous pandesal  and bonete plus slices of white cheese.  The bread is crusty, slightly dense and truly outstanding!  This is sold in a bakery somewhere near the Carmelite Monastery and is a must buy for me during the times that I would go to Lipa. 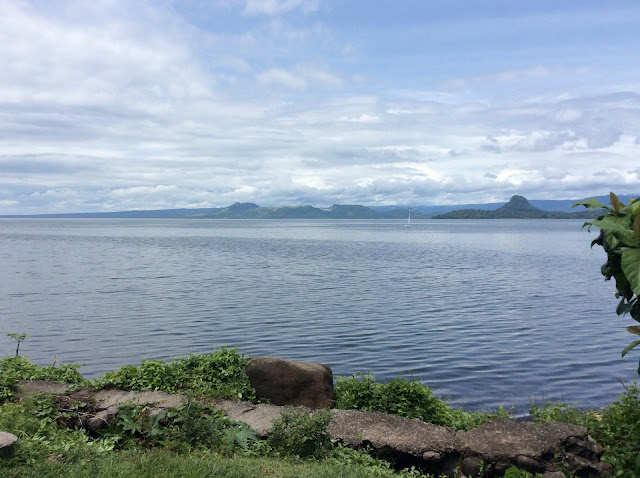 Second stop on the tour was at an idyllic place by the shores of Taal Lake.  Pusod Foundation runs the Taal Lake Conservation centre, a community based initiative located in Mataas-na-Kahoy, a suburb outside Lipa City. 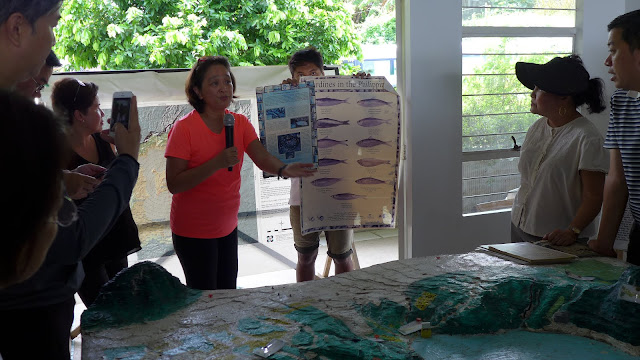 The foundation is headed by environmentalist, lawyer and now assistant secretary of the DENR,
Ipat Luna who gave a very interesting talk about their efforts in the conservation and ecological preservation of Taal Lake and its rich bio-diversity.
I felt a pang of guilt about the inihaw na tawilis (freshwater sardines) and sinigang na maliputo (freshwater trevally)  that I had consumed through the years.
These two species are native to the lake and perhaps I had unwittingly contributed to their depletion. 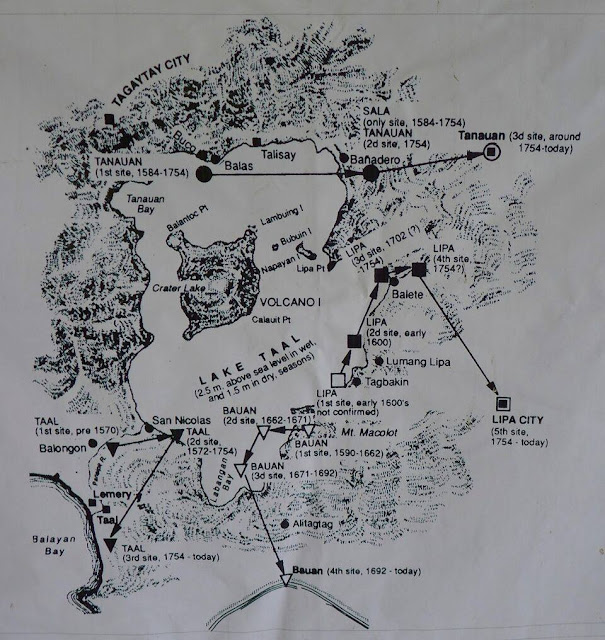 One of the most interesting parts of Atty. Ipat's talk was how the volcano and the lake had literally shaped the province of Batangas.  This old map of Taal Lake  shows the original sites of the towns around it.  Because of the massive eruptions of Taal Volcano since the 1500s, the towns
along the lake have been pushed back farther and father away, as people moved to safer areas.
It is fascinating to see that Lipa City's first site was right by the lakeshore but due to extreme volcanic activity it has since moved four times to its original location today. 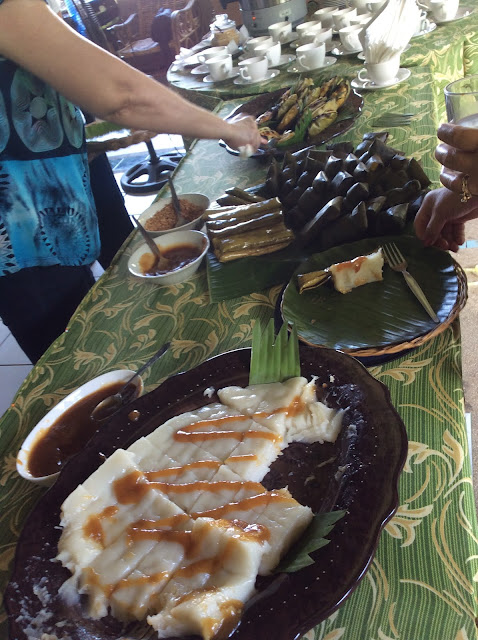 For those who felt like merienda, there were choices of local kakanin or rice cakes.  There were
two types of suman, bibingka and a creamy white kakanin drizzled with a caramelly coconut cream topping. So delicious but quite filling.  I knew a fabulous lunch was being prepared so I kept myself from indulging too much. 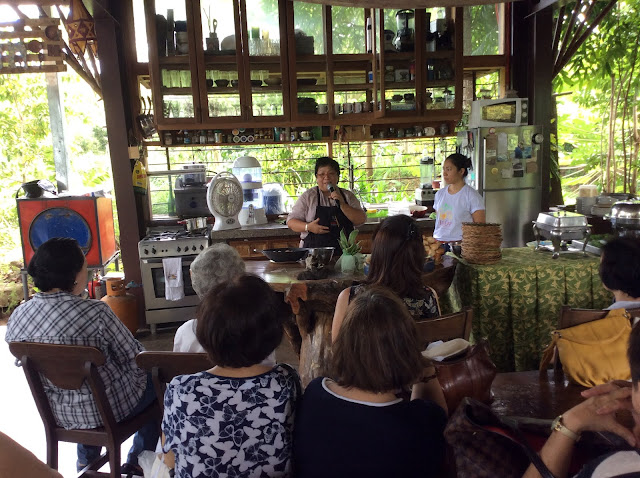 One of the highlights of the day was a special guest that CHOPS had invited just for this tour.
Chef Myrna Segismundo is one of the Philippines' most acclaimed chefs and a proud Lipeña.
Despite her hectic and busy schedule, she was able to free up a morning and showed all of us how
to make her  family's very own adobo recipe,  Batangas style.
What a privilege to have seen this cooking demo and to have personally met Chef Myrna,  who despite her success is a very down to earth and humble person.   She had also very thoughtfully pre-cooked a batch of adobo which we all shared for lunch. 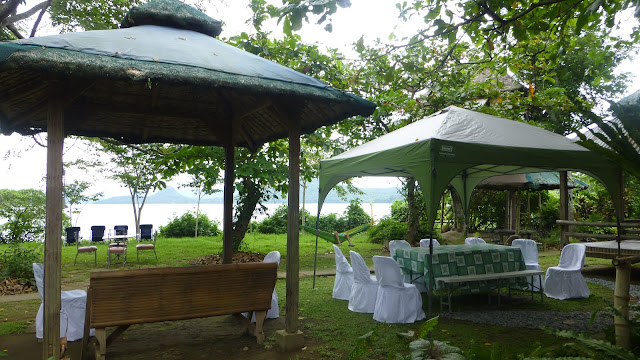 At the  Center there are facilities that allow you to fully experience the charms of Taal Lake.
You can go sailing or you can just sit and enjoy the breezes and the view. 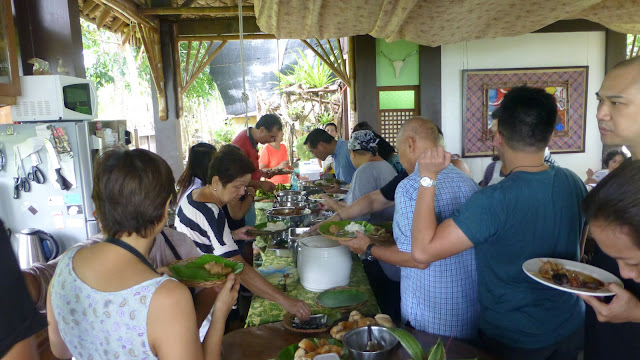 I couldn't believe that it was lunchtime -- after all I still had some kakanin and half a suman digesting in my stomach.  The cooks at the Center had prepared  a spread of classic Lipeño  and Batangueño dishes. 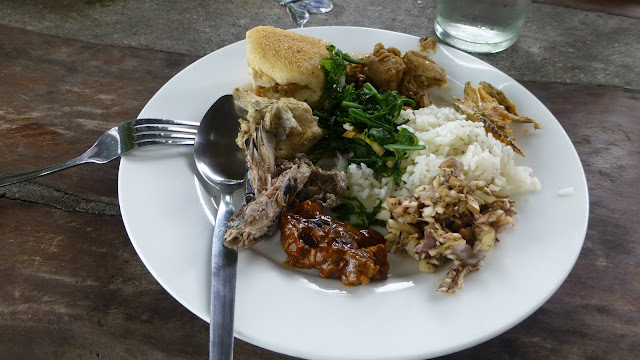 I filled my plate with a salad of fresh pako (fiddlehead ferns), sinaing na tulingan (steamed tuna), Batangas tinumis (made with puso ng saging),  fried daing na biya (small round goby) and of course some of Chef Myrna's excellent adobo. 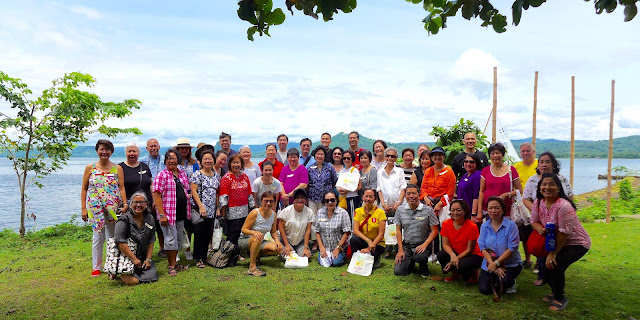 Before we left, we made sure to take a group photo with lovely Taal Lake in the background.
I am grateful that there are groups like Pusod Foundation that have made it their advocacy to take care of this unique natural resource. 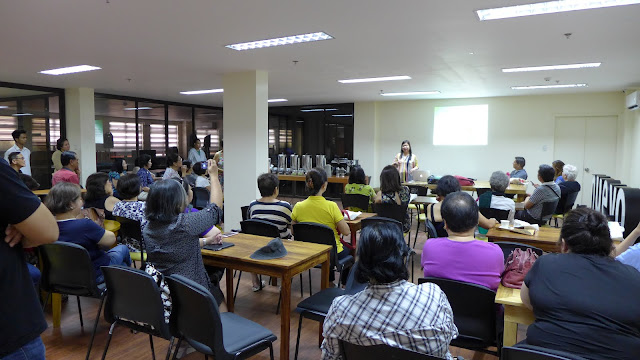 We all know about kapeng barako -- from the Liberica coffee bean grown in Batangas, it is a strong and dark flavoured brew.  For our Lipa tour,  Pia had arranged that we visit Mercado Coffee,
growers and exporters of Philippine coffee beans.
One of the owners gave us a presentation on coffee -- its history in the Philippines, how the beans are harvested, roasted, ground, blended and brewed. 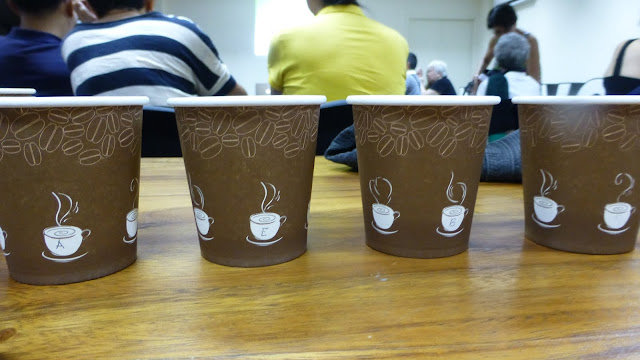 After listening to the presentation, I was in a state of coffee bliss, further induced by the tastings
of different blends that had been passed around.  Mercado Coffee owns the excellent local coffeehouse brand Cafe de Lipa which has started to make inroads outside of Batangas and into Metro Manila.  I diligently labeled my coffee cups as I tasted them -- Arabica, Excelta, Barako
and Robusta.  Of these four, I liked the Excelta blend best. 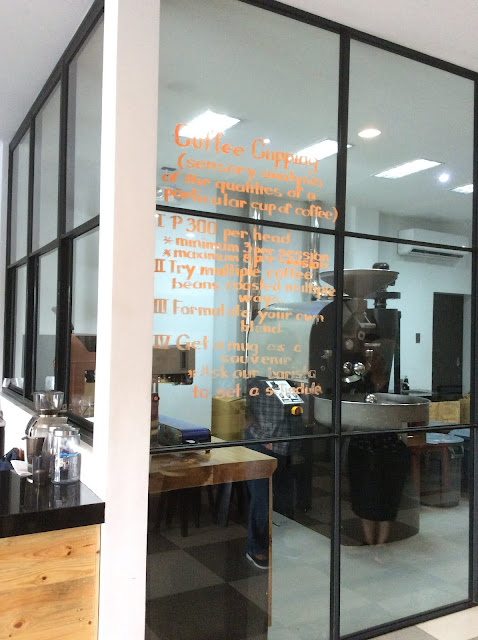 The main shop of Cafe de Lipa is on the ground floor of the company's office.  I was hypnotically pulled towards this glassed in room where one can have a special blend made based on individual taste and preference.  Sadly, I didn't have time to do this but I hope Cafe de Lipa brings this unique service to one of their Manila branches soon. 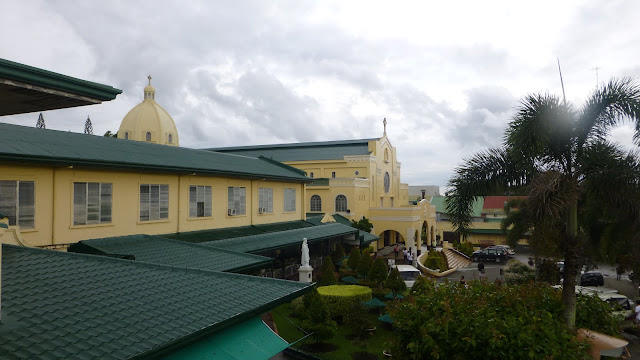 I was wide awake and caffeinated to the gills when we arrived at our next stop, the Carmel of our Lady Monastery.  The church has expanded much since I used to visit it many years ago.
It is a must stop for any Marian devotee.  It is particularly busy on the first Saturday of each
month when pilgrims come from all over Luzon. 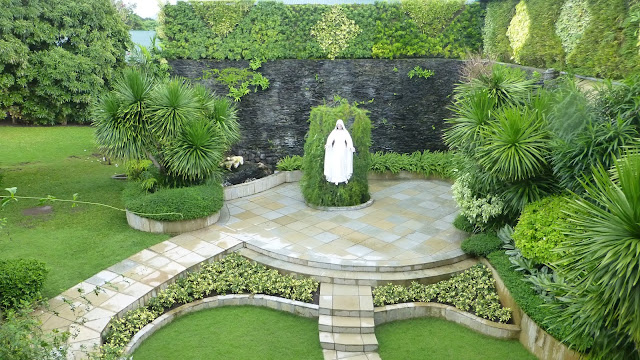 The monastery is famous as the site of a Marian apparition in 1948.  The exact spot of the apparition used to be closed to the public but they have transformed it into  a lovely meditation and prayer garden with a statue of our Blessed Mother.  While not everyone can enter the garden, visitors can view it from a deck above.  It exudes an unmistakeable aura of serenity and peace. 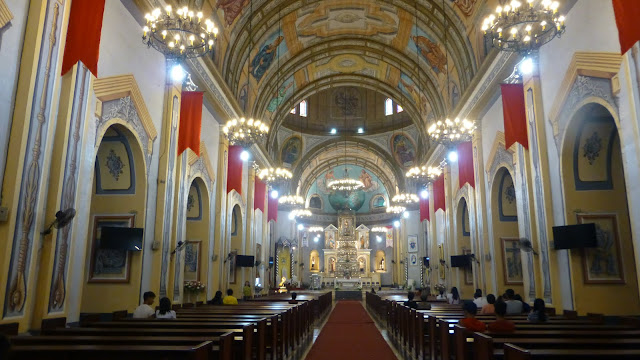 From the Carmel monastery, we headed a few blocks to the magnificent San Sebastian Cathedral
of Lipa City. Established by the Augustinians in the 17th century it is the seat of the diocese of
Southern Tagalog. 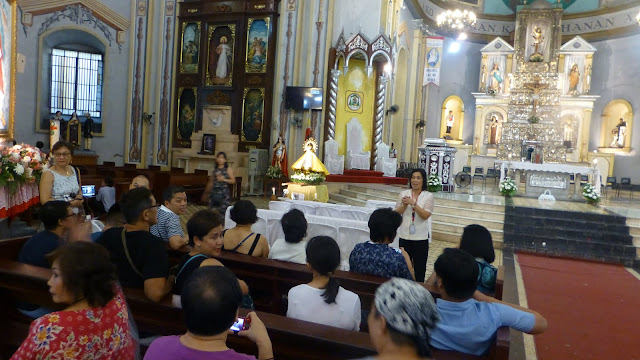 A church volunteer gave us a brief history of San Sebastian Cathedral and later on, some stampitas of the patron saint, St Sebastian.
I was impressed that the cathedral has a fully functioning pipe organ which we were fortunate enough to hear while we were there. 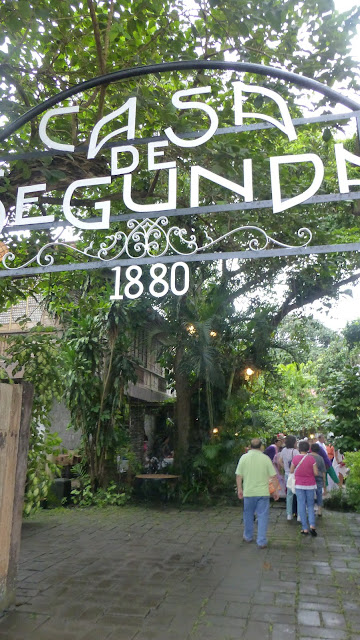 By the time we got to our last stop for the day, it was late afternoon.
Casa de Segunda is one of Lipa's last remaining heritage houses and the owners, who still live here have graciously opened their historic home to visitors. 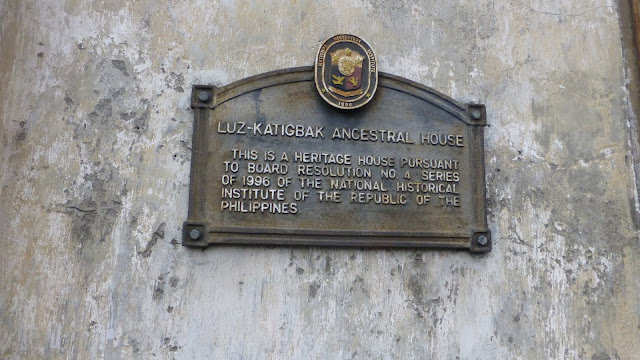 Also known as the Luz - Katigbak Mansion, the house is named after Segunda Katigbak who
was supposedly Jose Rizal's first  love.  Since he loved quite a few, she can at least claim to be
the first one to catch our hero's eye. 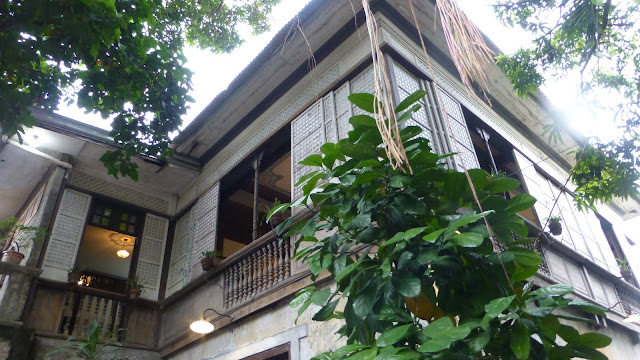 This bahay-na-bato which was built in the 1880 gives us a glimpse of the glory days of Lipa,
a  sophisticated and cosmopolitan town during the Spanish times. Today, the house retains much of
its resplendent past -- the family has lovingly restored it so that stepping inside transports you to another time and place. 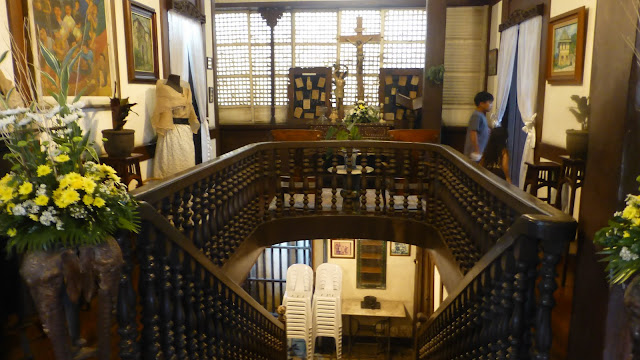 Perhaps because the family continue to reside within the compound and some of the rooms are constantly used,  Casa Segunda has a warm and well lived-in atmosphere. 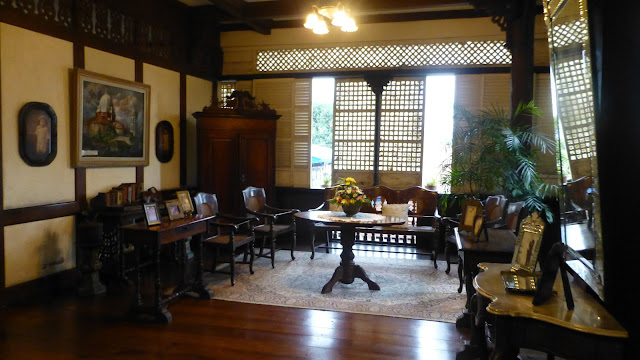 The sala, centrepiece of this ancestral home, is surrounded by tall capiz windows that allow cooling breezes in.  Period furniture, old family portraits and paintings definitely add to the ambiance.
The antique wooden floors have  a shiny patina -- I wonder, did Jose Rizal walk on this same spot
as he paid court to the young Segunda? 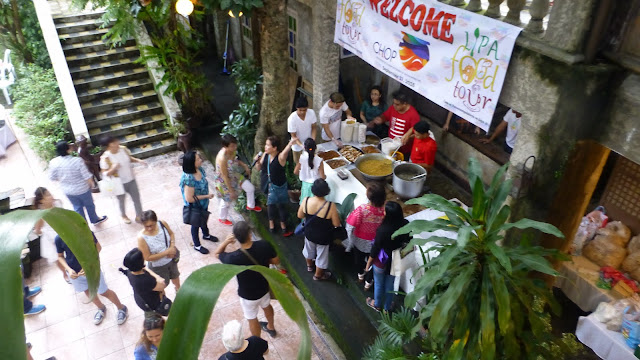 I leaned out the window and tried to imagine that I was Segunda, looking down on Rizal
standing below. However,  I was distracted by the growing queue of CHOPS members who were lined up, excitedly waiting for a bowl of the famous lomi of Lipa.
I could smell the aroma of lomi  all the way up to the second floor and this effectively dispelled any fantasies  of Rizal and Segunda.
It's hard to think of love and romance when the fragrance of garlic and pork broth waft through
the air. 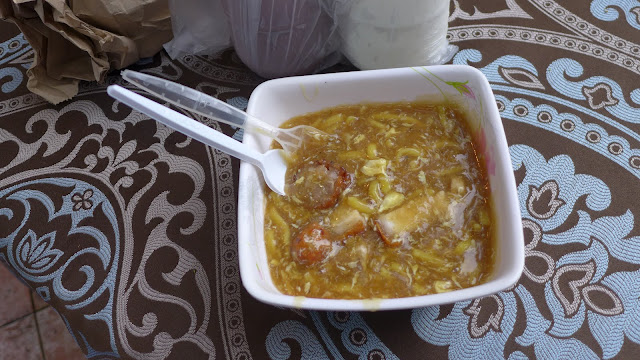 This is my bowl of Lomi de Lipa.  It has more (fattening) ingredients than Chinese lomi -- there
were chunks of lechon kawali or deep fried pork belly and thick slices of quekiam (chinese sausage) plus beaten egg to thicken and add even more flavour to the broth.  I couldn't finish my bowl -- I gave up after a few spoonfuls -- it was way too rich and savoury for my taste. 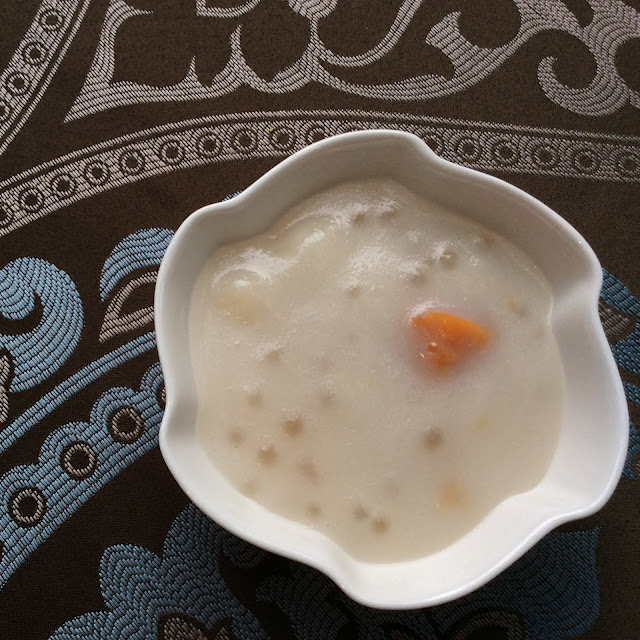 What I did finish (and would have licked clean if only I were not minding my manners) was
this bowl of "pinindot".  This is a simpler, pared down version of ginatan as most of us know
it but with only chewy  bilo-bilo or glutinous rice balls, tapioca and a few pieces of sweet potato.
It was creamy and not too sweet -- just the way I remembered and loved it.
What  a delectable  finale to CHOPS Lasa and Pananampalataya Tour of Lipa!

Posted by Labrador Lady at 6:12 AM