On our first full day in Paris, we were still jet lagged and somewhat bleary eyed from our 24 hour journey.  But still, we managed to drag ourselves out of the apartment to visit a few sites to give Martina her first real glimpse of our favourite city in the whole wide world. 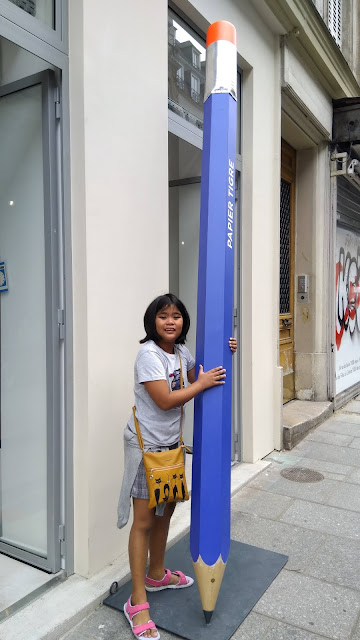 You run into such interesting finds around the neighborhood  -- Papier Tigre is a stationary shop in the Marais with such cool and distinctive items, all of them drool-worthy for stationary addicts (thank goodness I'm not one of them).   Sadly, no photos inside please  but anyone can pose beside the giant pencil outside. 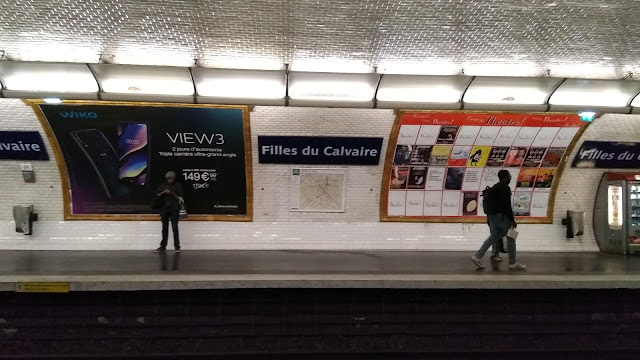 Paris' Metro system is efficient and affordable (one fixed fare to go all around the city).  The apartment was just a few hundred meters from the Filles du Calvaire station on line 8. 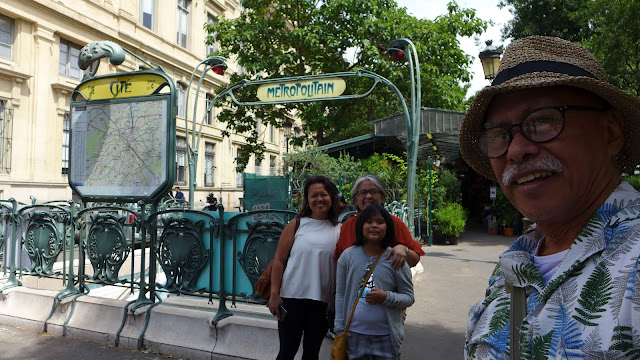 Jay's favourite metro station happens to be Cite which is right in front of the marche aux fleurs (also one of his must see, must go to spots).  This flower marker dates all the way back to 1830.
There are open air displays and covered arcades selling potted plants, flowers, gardening supplies, small antiques and all sorts of curiosities. 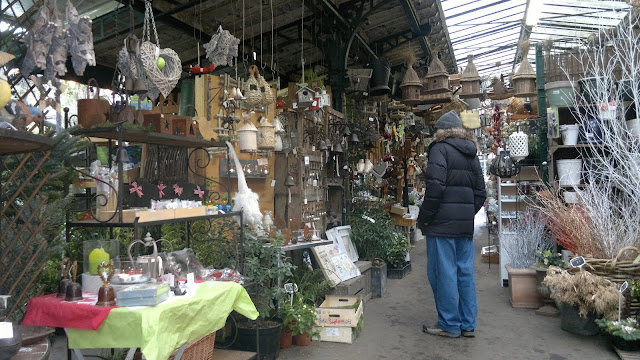 Photos at the marche are no longer allowed -- there are big NO PHOTOS signs all over the place.  Most likely due to the crowds of non-customers, all taking selfies and perhaps knocking down some merchandise in the process.
So that you can see how charming and quaint the marche is, here is an old photo taken some winters ago, on one of our Christmas holidays in Paris.  There are a number of these covered iron pavilions, built during the early 1900s. Crowded with all kinds of vintage and irresistible knick knacks -- we could never leave here empty handed. 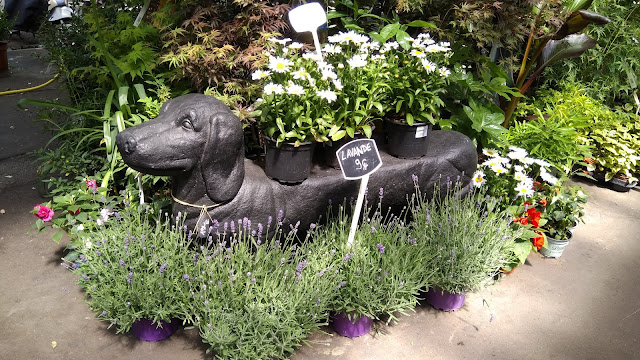 The only photo I could take was of this stone statue -- is it a bench, a planter?  It was adorable and one of a kind but definitely too heavy to bring home. 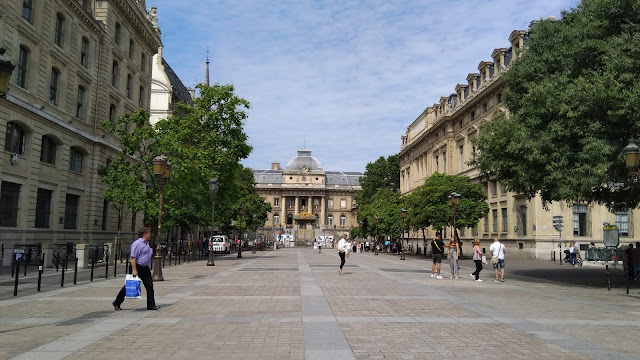 Aside from the marche aux fleurs,  the Cite Metro stop takes you right out to Place Louis Lepine, named after a former prefect of the Paris Police.  The Police headquarters used to be in a building
by the Seine, very near here but they moved out two years ago.  Across the square is the Palais de Justice  and beside it is  the amazing 14th century royal chapel of St. Chappelle. 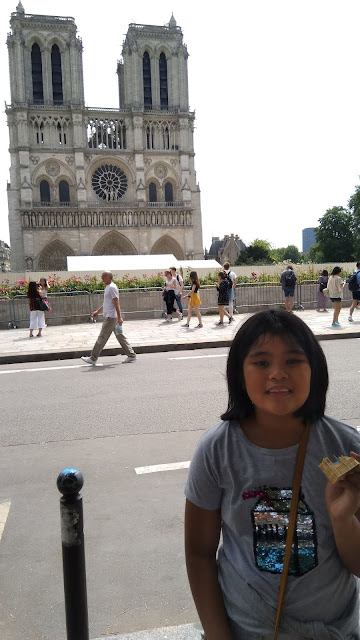 From the Place Louis Lepine, it is just a hop and a skip to Notre Dame.  Miraculously surviving the horrific fire in April, it was amazing to see that from certain angles (and with wishful thinking)   you could actually imagine that the fire never happened.
Here's Martina holding a mini figure of the cathedral.  Before we left, we had bought her a book that came with figures of the different landmarks of Paris -- we tried to visit as much of them as we could. 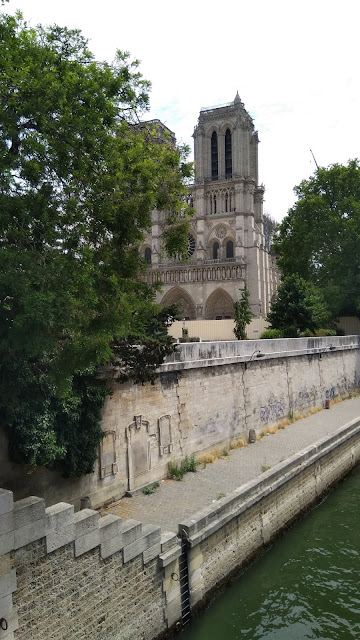 When you cross the bridge and look beyond the trees -- you will see the fire's extensive damage.
It is a truly a miracle that the Cathedral is still standing.  The entire roof is gone.
Seeing Notre Dame was a reaffirmation of faith ... she has stood for more than 850 years and I know she will be restored. 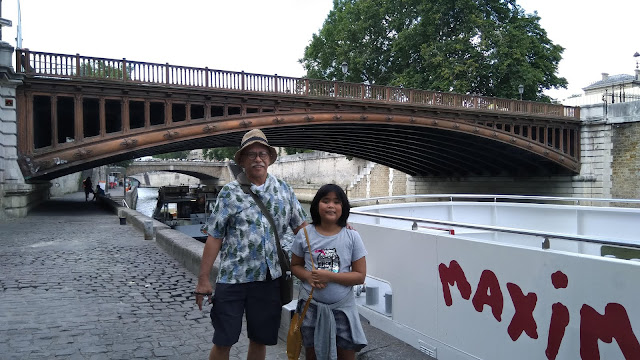 We took the steps down to Quai de Montebello to walk by the Seine.
In the background is the Pont au Double, a cast iron bridge dating back to the 1800s.
It used to be a connecting bridge between two parts of the Hotel Dieu, which is located beside
Notre Dame.  The Hotel Dieu is one of the oldest hospitals in Europe and  is still used to this day.
The bridge gets its name from the two silver coins that were levied as toll for those who crossed the bridge,  hence the name Pont Au Double.
No toll is exacted these days but the bridge is closed due to the reconstruction work at the Cathedral. 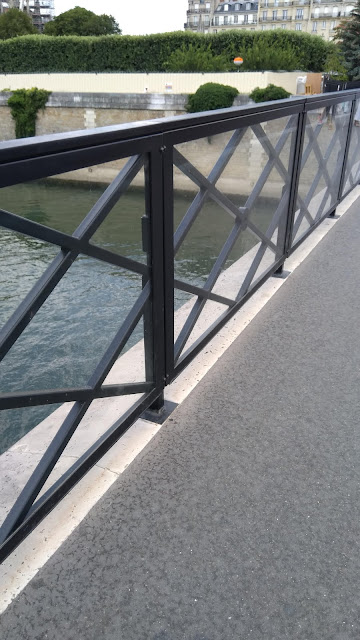 Behind the Notre Dame is the Pont de l' Archeveche, a  bridge that links Ile de la Cite with the 5th arrondissement. A few years back it was most famous for the sheer number of  "love locks" tied to its metal railings.  At some point in time,  part of the bridge's rails collapsed due to the weight of all the metal locks.
Good-bye locks and good bye pledges of eternal love!  Now, glass panels cover the railings -- no one can attach love locks anymore.  Is romance dead in the City of Love and Romance? 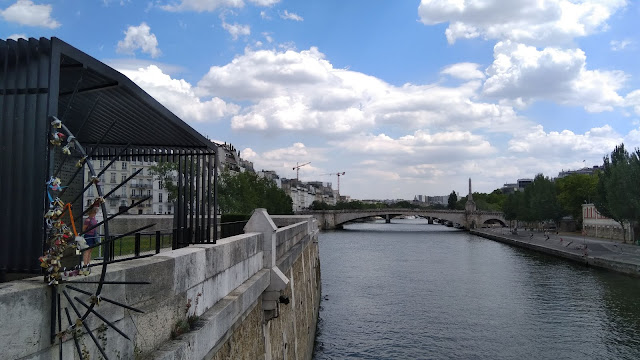 At the end of the bridge, a small memorial to all the locks (and love) lost has been set up.  Note though that this portion is fenced off, to prevent any lovestruck couples from attaching any more locks. 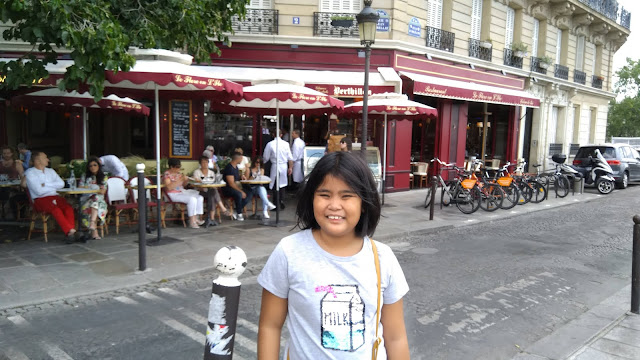 Paris was in the middle of the canicule or heat wave -- what better reward after traipsing under the hot sun than a pit stop at the city's best glacier ... Berthillon!  You can't miss it, it's right end of
Pont Saint Louis, the pedestrian-only bridge that connects the Ile de la Cite with
Ile Saint Louis. 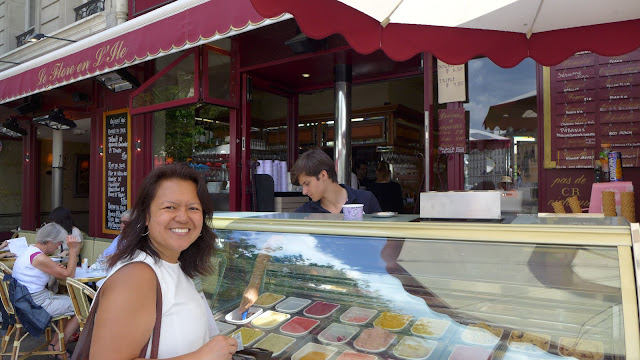 Berthillon's creme glacee is sure to bring a smile to anyone's face.  They may not have 31 flavours but what they do have is some of the best ice cream in Paris.

From Ile Saint Louis it is 2 kilometres more or less to the Marais and back to the apartment.
We crossed the Pont Louis Philippe which gave us a good view of the Pont Marie, one of three bridges that connects the island to the rive droit or right bank.
Blue skies, the Seine flowing calmly beneath ... c'est parfait!  Paris ... you never disappoint.

A long flight through different time zones is bound to hit anyone with jet lag.  Take it slow on the
first full day in a new place.  While you may want to cram as many sights and sites as you can in the short time that you're on vacation, kids need to acclimatise too.  A short but productive excursion
of a few hours followed by an early bedtime will help them recover and adapt quicker.
Posted by Labrador Lady at 1:06 AM