We woke up to our first day in Paris and I instantly missed Rue Bertholet.  I missed being so close to one of Paris' most famous food markets that I could pop out early in the morning for the makings of a scrumptious breakfast.  I would have to reconnoiter around Rue St. Andre to find a butcher, a cheese maker and a boulangerie! 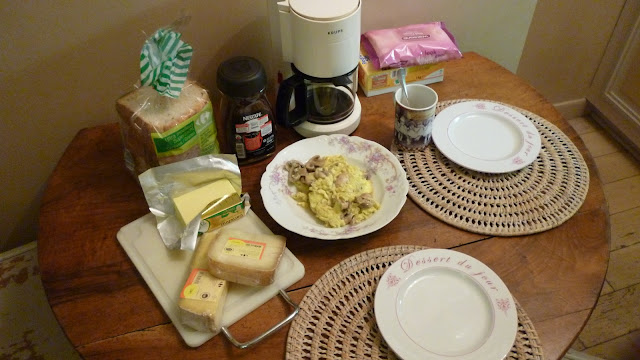 Still, this is Paris after all and last night's stop at the nearby Carrefour did yield a couple of french cheeses and some fresh mushrooms.  No oven warm baguette, generic multi grain bread would have to do.  But the butter was salty and good (as only French butter can be) and the mushroom with scrambled eggs hit the right spot so our first breakfast was still a good start to the day. 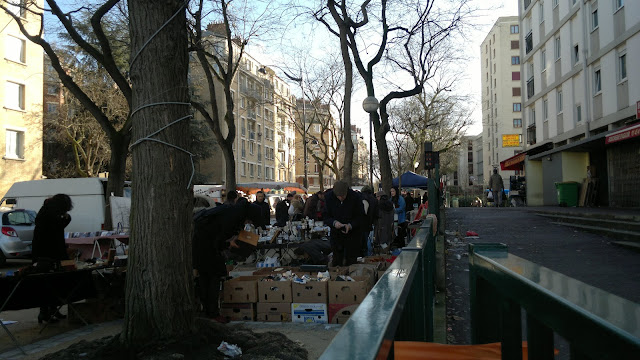 What did I do on my first full day in Paris?  I went la leches vitrine -- window shopping!  And not at a grand magasin but at one of my favorite haunts -- the marche aux Puces at Vanves!  We got to the flea market a little after 10 am and the market was alive and abuzz with activity.  The french love a good bargain, just as much as anyone else! 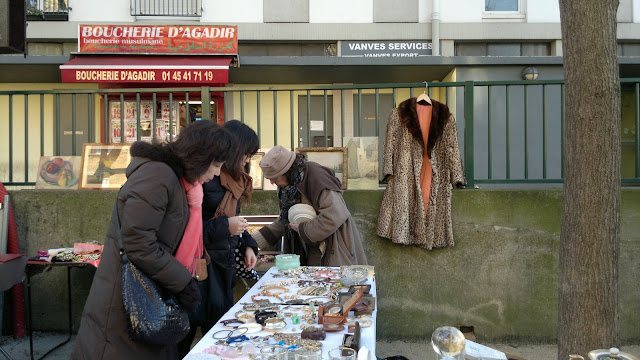 Hmm, would that fur coat look good on me?  I guess I'll never know as someone bought it immediately after I took this photo. 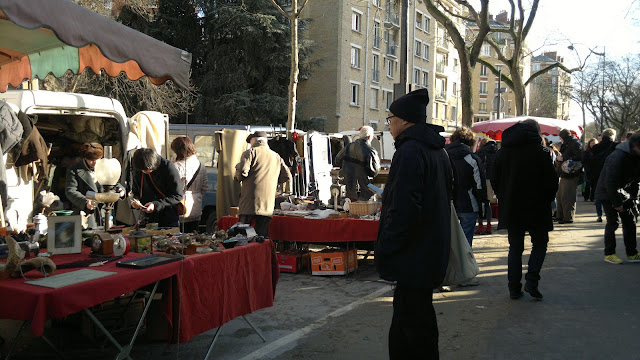 Jay, pack rat and hoarder that he is, enjoys Vanves as much as I do.  The variety of curiosities is just amazing. 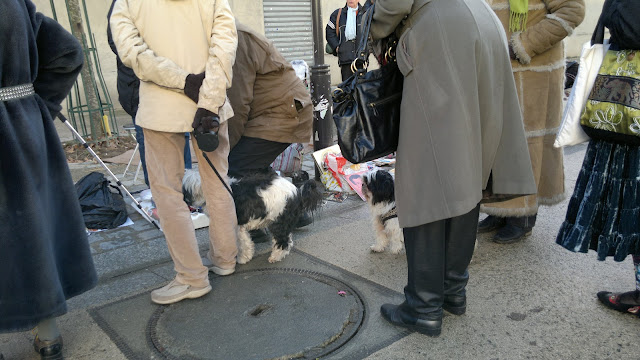 Vanves has gone to the dogs!  And why not, marche aux puces literally means market of fleas.  These french chiens are right at home -- I hope there are no real fleas hiding under their thick hair. 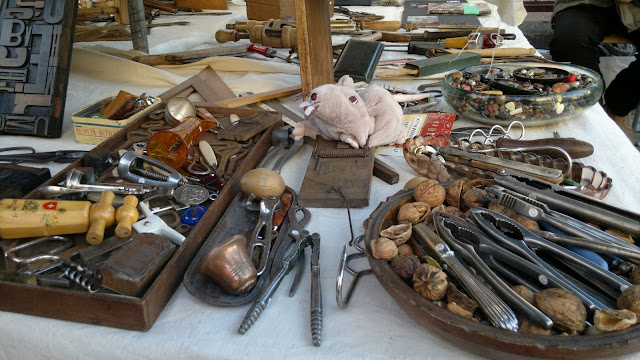 So adorable!  I spy a small Ratatouille guarding this table of odds and ends.  Did he crack those walnuts for later? 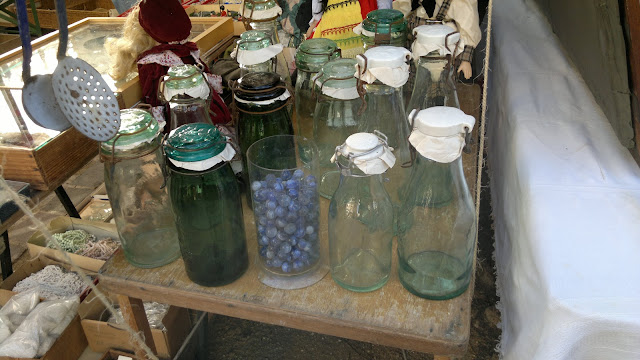 Every time I go to Vanves, I find something I really like but can't buy for how would I transport it back home?  This year I find these ceramic topped bottles so attractive but as Jay reminds me, he isn't about to lug anything breakable on his carry on. 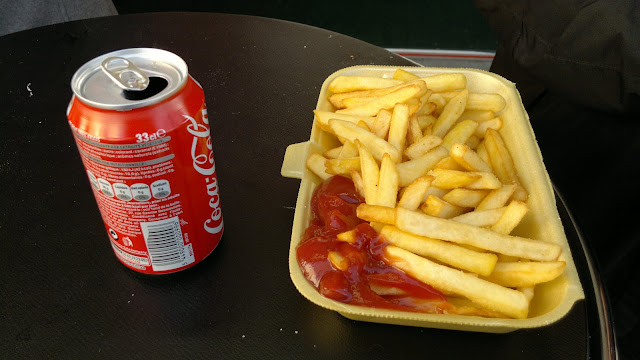 La leches vitrine is hard work so we head for the food truck and fortify ourselves with a huge mound of frites -- and un coca cola for Jay.  The frites are hot, freshly made and so salty.  Not surprisingly, we finish each and every piece. 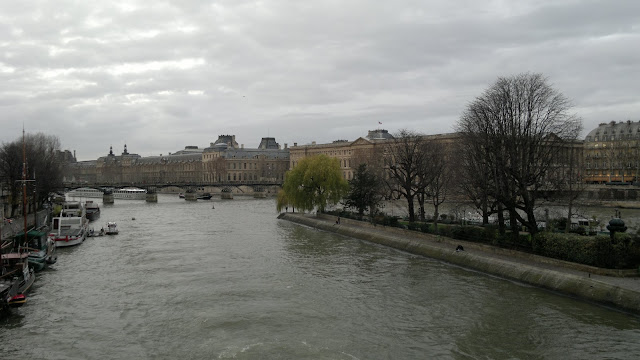 After a morning at the flea market, we take a mid afternoon walk around our apartment and just a few meters away from Rue St. Andre is the Seine.  The weather is cold but bearable and the afternoon light suffuses the river with an unbearably beautiful cast.  It may seem like a gray December day but it's a gorgeous gray December day. 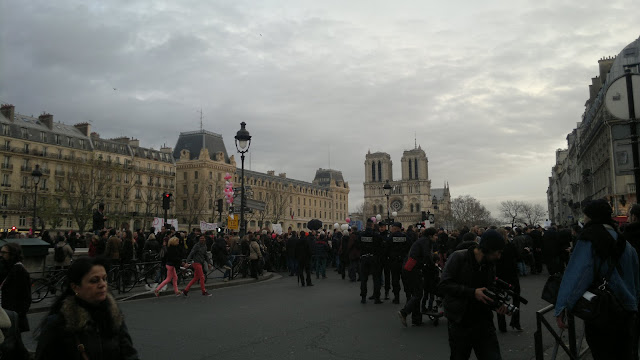 On the walk back to the apartment, we come upon a huge Gay Pride parade down the Boulevard St. Michel.  Notre Dame stands witness to a long, raucous yet well disciplined march of the Rainbow Coalition. 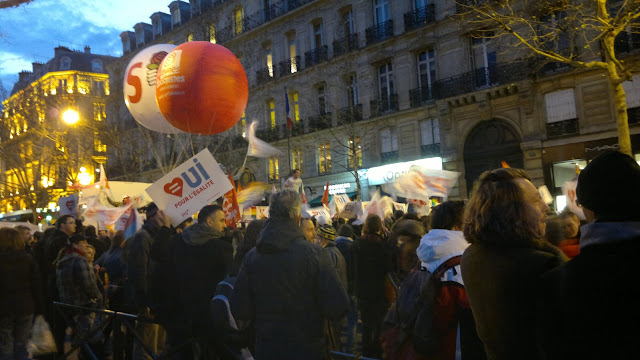 The parade continues till twilight, marching on towards the Luxembourg Gardens.  We come upon them again, as we walk towards our evening date at the Eglise Saint Ephrem. 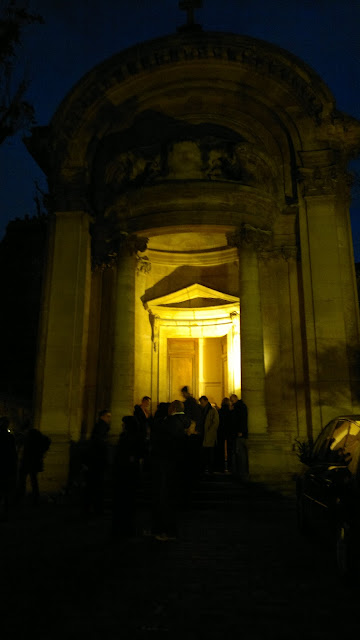 This beautiful small church is in one of the side streets behind the Pantheon and just a 15 minute stroll from the apartment.
Done in the Eastern style, it was the venue for tonight's piano concerto of waltzes and pieces by Frederic Chopin.  For this trip, I had decided that I would watch as many classical concerts in Paris' many lovely churches - this was the first of the series of tickets I had bought. 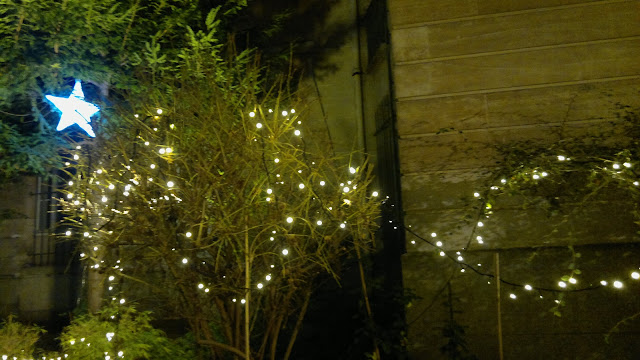 The theme for Paris' churches this holiday season is "lumiere" so quaint little Eglise Saint Ephrem has decorated the small trees in the front yard with fairy lights and one brightly lit star -- which reminds me of a parol and makes me miss home. 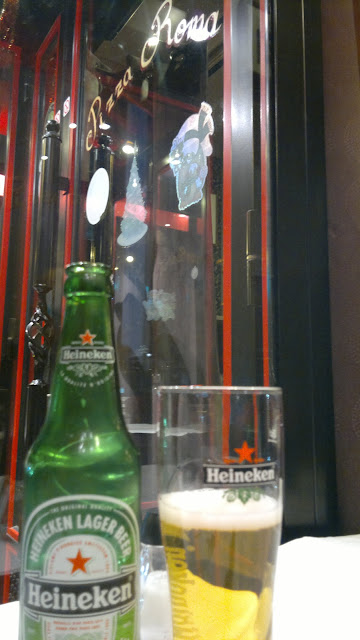 We are too early for the concert and the doors won't open for another hour so we find somewhere to sit and have a pre concert dinner.  This being Sunday, most of the restaurants are closed but a block away, we find a pizza place called Pizza Roma that's open and not at all full.
A glass of cold beer, a perch by the window and the door -- perfect combination for people watching. 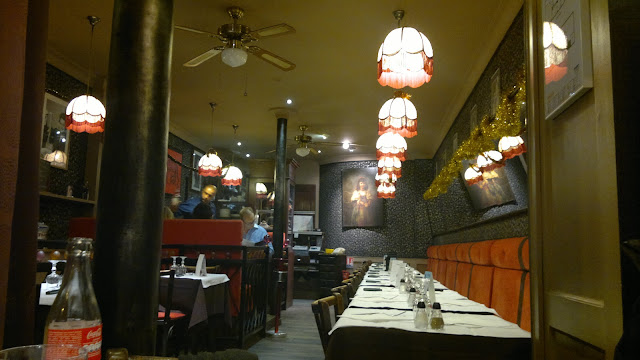 Pizza Roma is empty save for another table of tourists who can talk about nothing but investments and hedge funds and Merril Lynch. Aah, these americaines! 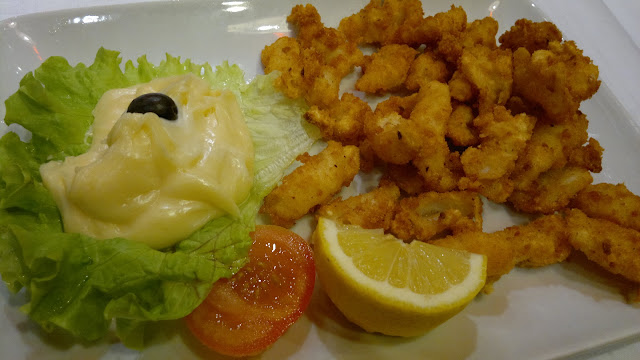 I ordered a calamares frits.  Nuggets of fresh and tender squid came  delicately fried and non greasy.  The batter was just right and with a squeeze of lemon, it was the right pulutan for my cold Heineken. 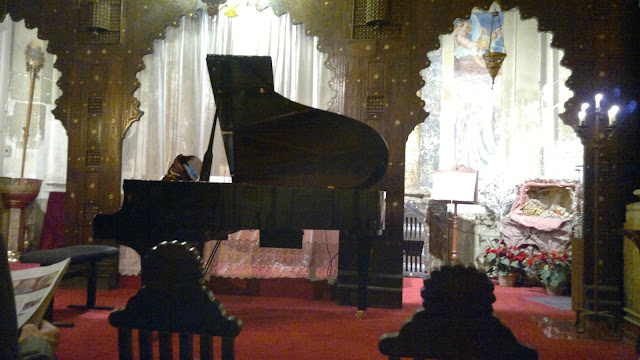 After that meal, we had more than enough time to go back and get good seats for the performance.
The evening of classical Chopin waltzes, mazurkas and ballads was performed by a slight yet passionately powerful pianist named Ello di Tanna who introduced each musical segment first in French then translated it most charmingly in English.
He played divinely -- Eglise Saint Ephrem was a fitting venue for this intimate yet magnificent concert. My first day in Paris was complete -- and ended on a sublime note!
Bravo!
Posted by Labrador Lady at 8:05 PM