I have always enjoyed savoury pies called empanadas -- they make great little snacks.  Hearty enough to assuage the hunger pangs and yet not too heavy as to spoil the appetite for the next meal. 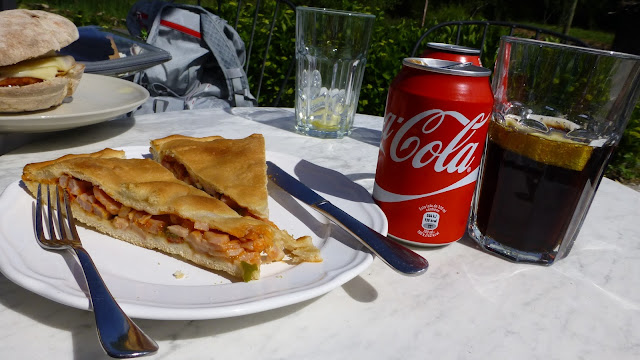 In Galicia, empanadas were a regional specialty and ubiquitous, specially along the Camino.  The Gallegan empanada is baked either as a large round pie, cut in wedges or as a big rectangular block sliced in equal sized squares.  The most common (and perhaps the cheapest) filling is tuna or atun. Once in while, a nicer bar or albergue would carry a few more varieties like jamon con queso, chicken or chorizo.   I would usually stop for a slice of empanada along with a cold beer or coke when hunger pangs struck along the Camino. 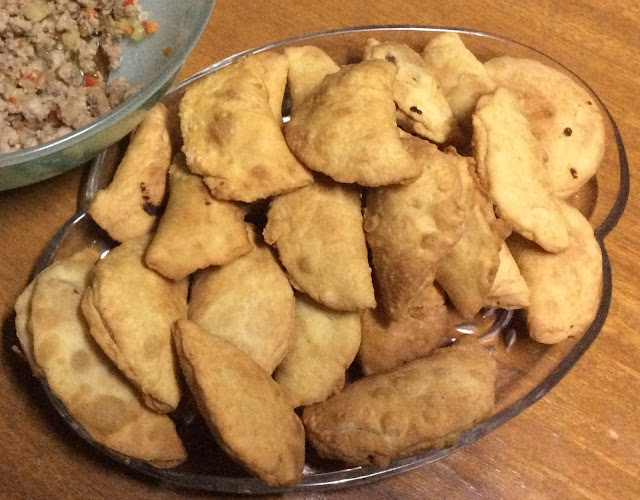 Back home, I remembered the many times I cooked this snack when I was in high school.
Unlike the Gallegan empanada,  my  empanadas were fried, not baked.  My father taught me how
to make these deep fried treats and I would make them on week-ends when he and I would share
the kitchen and the cooking duties.
I decided to make empanadas again a few days ago and was quite happy with the result.  I made smaller pies than usual, just enough for two bites.   Despite being deep fried, they were not at all greasy or oily -- everyone loved them!  I'll probably double the recipe the next time I make this
tasty homemade merienda fare.


Here's my recipe for Fried Empanadas with Pork Filling

Optional -- some people like raisins in their empanadas (my mother for one always insisted on these)
but I don't like the sweetness that raisins have  but feel free to add them if you  wish, just make sure
you soak them before you cook them.

Sift the flour and salt on to a mixing bowl.  Cut in the shortening using a pastry cutter until the mixture has small lumps.  In a separate bowl, beat together egg, ice cold water and vinegar.
Add to the flour mixture and mix together until mixture just blended (be careful not to over mix).
On a lightly floured surface, knead the mixture to bring it all together.  Form dough into a ball and cover with plastic wrap.  Refrigerate for an hour.

While the dough is resting in the fridge -- make the pork filling.

Saute garlic and onion and bell pepper.  Add the ground pork mixture and cook till browned.  Season to taste.  Add fried potatoes and carrots.  For a bit of colour, add a bit of light soy sauce but be careful
not to make the filling too salty.  Remove from pan and let cool.

Remove dough from the fridge.  Cut off a piece and roll to a thin flat shape.  Form into equal round shapes.  Into each round piece of pastry, spoon some of the pork filling in the centre,  fold the circle
in half and moisten edge to close.  Crimp edge with a fork.

Heat oil in a pan, enough to cover the empanadas.  When oil is hot, cook empanadas, making sure they do not crowd the pan.  Fry till golden brown and drain excess oil on thick paper towels.

This recipe is good for 24 small empanadas.

Posted by Labrador Lady at 2:53 AM

Email ThisBlogThis!Share to TwitterShare to FacebookShare to Pinterest
Labels: Recipe