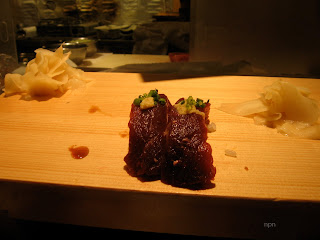 Greenpeace, come and get me. I had a piece of Moby Dick.

As the debate and the controversy about Japanese whaling continue to rage, I found myself confronted with the prospect of eating whale meat in a sashimi restaurant in the Tsukiji outer market in Tokyo.
My Japanese friend and I were at lunch, grazing at the counter, watching the sushi chefs doing their thing -- pointing to this and that -- toro, ika, saba, uni, unagi, ebi and other sorts of fish and shellfish. Then the chef took out a slab of something dark and very red.
My friend looked at me ... "Want to try that?"
Well why not but what is it?
"Kujira. Whale meat."
Visions of Japanese whaling ships fighting it out with Greenpeace flashed before my eyes, along with large gentle whales being slaughtered -- just for the sake of their meat. Not very appetizing. I closed my eyes and took a deep breath.
Once again, my baser foodie self got the better of me. I had to try it just once, after all, there it was, in front of me, waiting to be sliced and sushi-ed and given up for my palate.
So I had one piece of whale meat sushi. The meat was very dark red and quite rough in texture. It was served with some finely grated ginger as garnish and garlic greens to mask the odor my friend said although I did not detect any.
I had thought that it would have a very strong and remarkable taste but I was suprised -- whale meat was quite ordinary and not tasty at all.
I would understand the fascination with whale meat if it was something extraordinarily good. But I was unimpressed. And just very sorry that whales continue to be slaughtered for food.

Posted by Labrador Lady at 1:22 AM